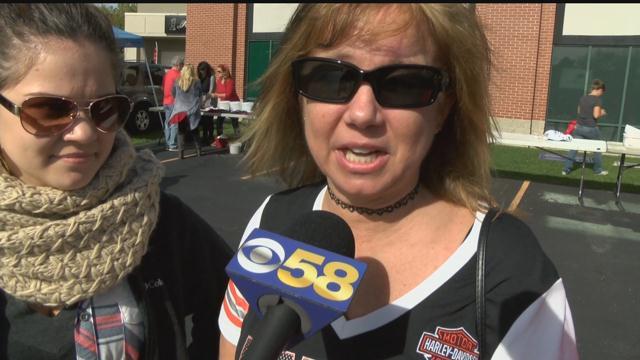 A foul ball at a Brewers game cracked her skull and blinded her in the left eye - but now, only three months later, she's back out with her friends as they try to raise money for her medical bills.

The event called "Going to Bat for Laura" benefited Laura Turek who was hit by a foul ball at a Brewers Game at Miller Park on June 6. Bikers and supporters gathered Saturday outside Milwaukee's Harley Davidson dealership.

More than a hundred motorcycles rolled out of the parking lot to start the fundraiser. Run coordinator Rusty Smart said the ride will go 75 miles in honor of the woman many of these bikers know as a friend.

"I was actually watching the game when it happened. I didn't know who it was at first until the next day and I was like 'Oh my gosh, that's a friend of mine'," Smart said.

It happened at the top of the ninth inning as the Brewers took on the Braves. Officials halted game play to help Turek. The ball crushed face, fractured her forehead, and slammed her eye.

It's taken months and multiple trips to the plastic surgeon to get to this point she's at now with a small scar that doesn't show the severity of the situation.

"When it happened I didn't realize I got hit by the ball," Turek said.

"On impact the nerve was severed so I felt no pain. And I didn't hear the sound of it. So to be honest I thought that someone behind me was pushing down on my head," Turek said.

"There's still a long road ahead. A few surgeries. I have another surgery scheduled in December to try to restore the eyesight in my left eye. There's some risks involved in that," Turek said.

She has already had a titanium plate put in her head but doctors tell her she will have permanent nerve damage on her face's left side.

There's also financial pain. Although she hasn't had to pay a medical bill yet she said it will start before she knows it.

The people attending this weekend's event said they're trying to remove some of that stress.

"She's a great lady. You know, she's got a long road ahead and we're here to support her. So that's what we do," Smart said.

"And I tell you don't take anything for granted because this certainly puts things in perspective," Turek said, motioning to her face.

She also is in contact with the Brewers organization. They are communicating and the team even gave some item for a silent auction at the event, Turek said.

As to the question who's liable for the injury - the family says on every ticket it says fans are agreeing to assume certain risks by going to a game.

To donate to the family of Laura Turek click here.