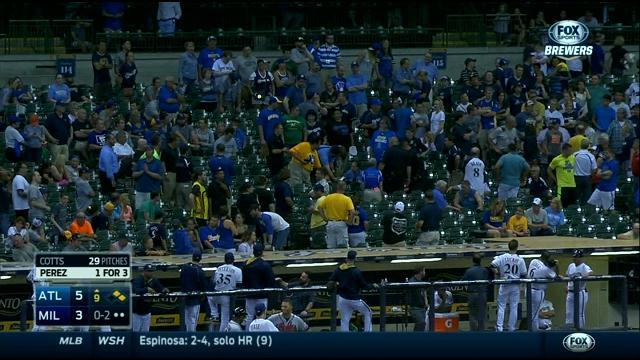 A fan was hit in the head by a foul ball in the top of the ninth inning Monday night at Miller Park.  Atlanta Braves outfielder Eury Perez hit a sharp line drive into foul territory over the Brewers dugout.  Cameras didn't catch the impact, but players and fans reacted immediately.  Medical personnel arrived quickly and put a towel on the woman's face.  The game was delayed for about nine minutes.  The woman walked to the aisle with help from medical personnel and was then put on a stretcher. The extent of her injuries is unclear.  Brewers manager Craig Counsell said the woman is in the team's prayers.  He was asked about increasing safety measures at games, but downplayed how often people are hurt.

CBS 58 asked the Brewers for a comment on the person's condition but haven't heard back.