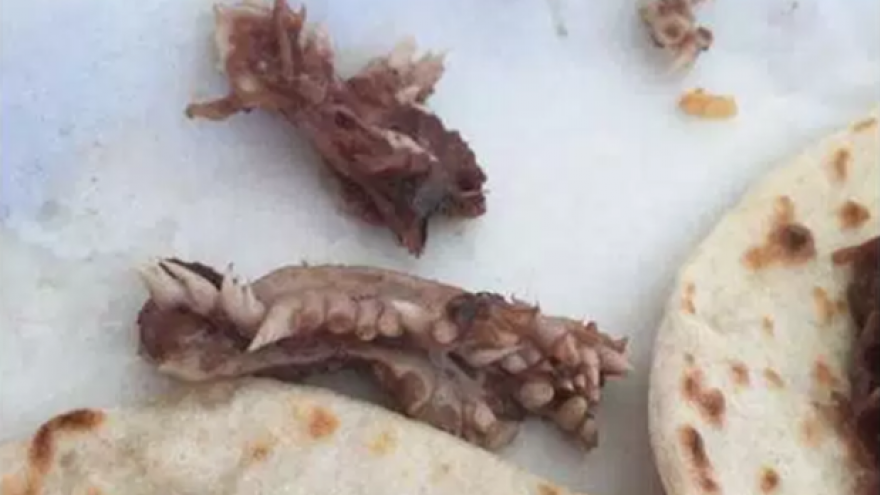 (CBS NEWS) A woman was appalled to find what she believed to be “teeth” inside her barbacoa tacos over the weekend, and when she shared a photo of the odd meat it quickly went viral.

Courtney Aguilar’s post, which since has been made private, was shared by more than 2,000 people, reports CBS affiliate KYTX in Tyler, Texas.

“When you order Barbacoa tacos but get teeth instead,” she wrote on Sunday, sharing a photo of the chunk of mystery meat she discovered at Mexican restaurant El Rincon in Pflugerville, Texas. “I asked the server if this was teeth. She said, ‘baby teeth.’”

The news came as a shock to both those who saw the photo and the restaurant itself, which has been a business in the area for more than 26 years.

“Never eating from there,” another wrote.

A day later, El Rincon responded to Aguilar’s post, saying they were aware of the situation with the item found in the barabacoa.

“Barbacoa is one the few items that we buy pre-made from an approved FDA vendor and we are no longer going to buy from that vendor,” the restaurant said in a statement on Monday. “Barbacoa is cooked with different parts of the cow but mostly from the head or cheek of cattle.”

The restaurant said they would stop selling barbacoa until they got a new vendor, and apologized to Aguilar for the mishap.

Aguilar said she spoke on Monday with El Rincon’s owner, Roger Baza, who reassured her the item in her barbacoa was not teeth after all. The San Antonio-based vendor Laxson, which provided the meat, visited the restaurant this week to discuss the issue “with documentation,” Aguilar added.

On Thursday, El Rincon posted an update saying the vendor had identified what was found in the meat, and it wasn’t “teeth” after all.

In a statement sent to mySanAntonio.com, Laxson explained that the “teeth” were actually “beef lips,” which it described as “a USDA-inspected product for human consumption.”

“We admit cow lips are not the most attractive food item and can resemble teeth,” Laxson said. “Unfortunately, it made its way into this customer’s dish.”

Occasionally, some parts of the lips get mixed into cheek meat during the making of barbacoa, the company explained.

“It is easily identified by the soft pointed nodules that is on the inside of the lip,” Laxson told mySanAntonio.com. “There is no equipment that I am aware of that can detect this in the cheek meat, and it is extremely rare that any of this gets mixed in with the cheeks.”

Despite the explanation and the fact that El Rincon has taken “full responsbility” for the incident, Aguilar said she still “will not be back.”

He may have lost one customer, but Baza hopes others will stick by the restaurant’s side.

“As you can imagine, this has been a tough time for the El Rincon family as this issue with the contents of the barbacoa taco has been mostly negative until the explanation was provided,” Baza told CBS News. “Our restaurant depends on our customers and our restaurant has been in business 26 years because of them so we do not take this lightly and hope to have barbacoa back on the menu soon.”

In his original statement, Baza said the restaurant would part ways with the vendor. But given the new information, he said they have not yet made a decision as to the future supplier of beef cheek meat.

“We are exploring all options to deliver the best possible product at a reasonable price,” he said.