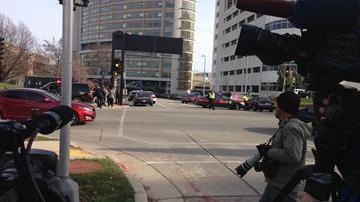 WAUWATOSA -- At one point Children's, Froedert and the Medical College were all placed on lock down as a result of this incident...And thousands of patients and staffers were affected.

It was a terrifying day for many at Children's hospital.  The reactions range from shock, disbelief, to anger for some.  Samantha Cornish says she witnessed some of the incident up close.

\"The lady who was the baby's mom or girlfriend,\" Cornish said.   \"She just came flying into the elevator she was screaming and didn't let us press any of the buttons. She pressed 7th floor and the elevators opened up to the guy. Police officers holding him back and push her into the elevator again.  She just kept screaming.\"

Others left the building when they heard the announcements.