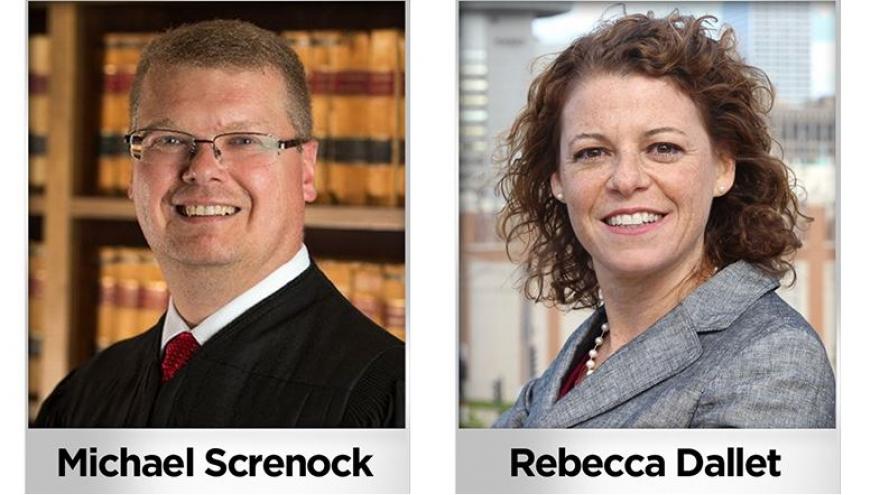 MILWAUKEE (CBS 58) --  Wisconsin voters have one statewide race to vote on Tuesday for Supreme Court Justice.

Just this week, former Vice President Joe Biden endorsed Milwaukee Dallet. The National Rifle Association has endorsed Screnock.
both have raised more than 400 thousand dollars in just the last month. Both candidates say they will put their political beliefs aside, but Screnock has received more than $100,000 thousand from the state Republican party, and Dallet has run ads criticizing Republican President Donald Trump.

Dallet has been the Milwaukee County circuit judge for 10 years, presiding over more than 10 thousand cases.
In addition to Biden, she has the endorsement of former U.S. Attorney General Eric Holder and 200 Wisconsin judges.

Gov. Scott Walker appointed Screnock as Sauk County judge in 2015. He has endorsements from a majority of Wisconsin sheriff's and three current justices. We asked both candidates what voters will get from them.
Screnock called Judge Dallet an activist and said he would simply follow the law.

"What they will get from my opponent is a rubber stamp for our governor, and our legislature, and somebody who will not step off cases involving his big money special interest donors," Dallet said. What voters will get from me is somebody who is fair and independent. I've worked in our courts for 23 years."

Both candidates said they hope as many voters as possible make it to the polls on April 3.