Wisconsin Man Born without Hands Fights for a Drivers License 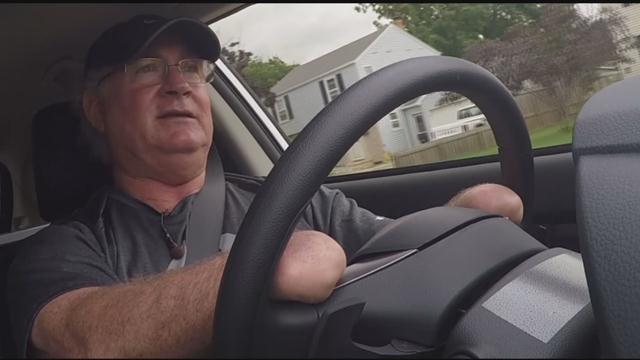 Jeff Alexander reports a man living in Wisconsin who was born without hands is fighting for policy changes at the Wisconsin DMV after he was denied a license at three different offices.

“I'm sure the people at the DMV are good people and they're doing their job, but that doesn't mean their policies are correct,” says Mark Speckman.

Speckman still finds it hard to believe that after driving for 44 years without an accident, and possessing drivers licenses in several other states and Canada, he's been out of luck since moving to Wisconsin.

\"I've heard from people I went to kindergarten with and high school, college, kids I've coached and taught, friends from all over - a ton of people saying this is ridiculous and they should give you your license.\"

\"There's been a newspaper story in the United Kingdom, it's been in Canada, I've been on a radio show in Los Angeles and Portland, Oregon.\"

At the heart of Speckman's frustration is what he considers a vague and discriminatory DMV policy aimed at people with disabilities trying to obtain a license. Speckman says the policy was different at DMV offices in Appleton, Oshkosh and Green Bay with two insisting he take a road test and the other demanding medical clearance.

\"I think it's really resonated with where people are going discrimination in this day and age should be stamped out. I just think obviously the state of Wisconsin hasn't really worked out in the DMV a good policy for people like me. How do you think I got here? I drove.\"

As Speckman showed us, he's still driving, legally, with his California license and he has no plans to take a road test or get a doctor's permission slip.

He's hoping for legislative change, yet prepared he says to take the DMV to court.