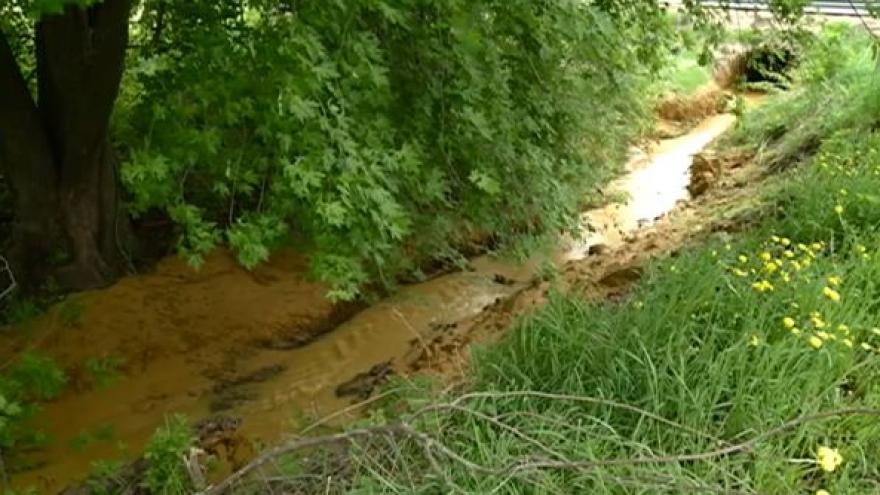 WHITEHALL, Wis. (WKBT) -- An incident at a frac sand mining facility retention pond in Whitehall has some nearby residents concerned for their own safety.

When a worker became trapped inside a submerged bulldozer Monday, water from the pond was released to save the man's life. Hi-Crush, which owns the facility where the incident occurred, said the retention pond had water and sediment left after processing.

When workers broke the barrier to save the man's life, it moved across the property into other waterways, leaving a thick, bright orange sludge in its wake. Nearby residents said they've never seen something quite like this and are now looking for answers.

Bill Sylla saw photos of the nearby stream after the incident and went to check it out. All he could think was, "Holy crap! That's a lot of orange."

Sylla and his family live down the road from the site.

He said he's seen wildlife struggling to get through the runoff.

"It was halfway up the body of the doe. That's how deep the muck was. And then we saw a baby fawn stranded in the middle of it on a clump of grass," Sylla said. He was able to rescue the deer with a friend.

Some citizens contacted the county to investigate the incident.

"There was a concern as to what materials might be in this water," said Rick Niemeier, corporation counsel attorney for Trempealeau County.

Hi-Crush said it regularly tests the water that goes into the retention ponds. They've seen no indication that the contents are hazardous to health. But county officials with land management and the health department are taking precautions.

"My understanding is that they've obtained various samples and were sending samples to Madison to have them analyzed," Niemeier said, on behalf of the county.

The company said cleanup efforts are underway in coordination with other agencies. But Niemeier said different measures could be taken in the future.

"Once we get the samples back and find out what was in there, then obviously we'll have to take a look at what any other remedial measures will need to be taken to minimize any impacts," Niemeier said.

While Sylla is thankful that the bulldozer operator was able to be saved, he's hoping the wildlife can be recovered as well.
"We got a mess that needs to be cleaned up and how many years is that mess going to be here?" Sylla wondered.

Representatives for Hi-Crush did not have a timeline as to when the cleanup efforts could be completed because it is based on other factors.