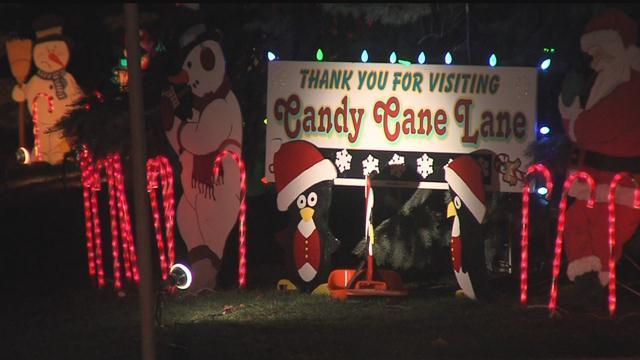 It's a holiday tradition for a good cause. Dozens of homes in West Allis are all decorated for the holidays for a fundraiser that literally stops traffic. The holiday event is steeped in history. For the past 30 years, "Candy Cane Lane" has offered folks a chance to drive or walk through several West Allis neighborhoods and see all of the pretty Christmas lights. The goal is to raise money for child cancer research.

When Linda Johanning moved to West Allis from Minnesota 10 years ago, she was definitely excited.

That was something interesting, considering she thought she was moving to 95th Street.

Now, Johanning does, which is why she's outside braving the autumn chill decorating her front yard, just like most of her neighbors.

"we always consider it a mid-winter block party," said Pat Wolfe, who has lived on the block for 42 years.

Wolfe been part of the process of transforming her neighborhood in to the holiday spectacle that it is since the Candy Cane Lane attraction began.

"It started around here, and just casually with the neighbors, everybody did a little something, and it just evolved over a period of time," Wolfe said.

Not only do you get to drive or walk through and see all of the lights and designs, you get to help a cause. Visitors donate to The MAACC Fund, and the money raised helps fund pediatric cancer research.

"We had a neighbor some years ago that lived next door, and their young son had numerous bouts with cancer as a very young child. And that sort of gave us a little more push to do more," Wolfe added.

That is why Linda Johanning is bundled up to decorate her yard.

"Yeah, it's worth it. All the hard work in the freezing cold is worth it for the kids," Johanning said.

Candy Lane Lane is open nightly from about 5 to 10 pm. Donations are picked up at 95th and Manitoba. Last year's event brought in $105,000 and they're hoping for the same this year.