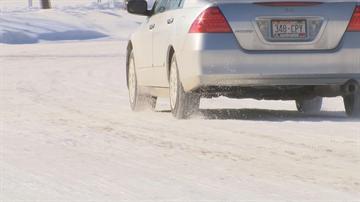 TOWN OF WAUKESHA -- You get the sense this is the winter that will never end.  It seems like we get snow almost every day.  That's becoming a big problem for the Town of Waukesha, where keeping the roads clear now means getting past two hurdles.

The town ran out of the nearly 2000 tons of salt purchased for this winter, forcing the board to buy an emergency supply.

\"There's a hill and intersection just down the road from where i live that can be tricky if it isn't salted,\" resident Jim Radke said.

That hill Radke is talking about will still get treated.  The town decided to ration salt by mixing it 50/50 with  sand, but will only spread the mix on hills, intersections and curves.

\"There really isn't a whole lot of choice, other than spending an exorbitant amount of money on salt alone,\" Radke said.

Waukesha Town Chairman John Marek helped find more salt, but it comes at a price.  A ton normally costs $54, but buying 500 extra tons in January will cost an additional $20 a ton.  When mixed with sand, the composite will cost around $44 a ton.

\"We have excess cash in the bank and we should be able to stay within our budget if the winter continues the way that it is,\" Marek said.

Marek's other concern is the location of the salt.  The town keeps its supply n Dousman, nearly 15 miles away.  Marek says the  town had the option to store it at a county facility just seconds away, but the board voted that down.

\"That would've allowed trucks to remain on town roads for a far longer period of time,\"

Marek said.  \"In inclement weather, those trucks could be outside of town boundaries for three hours.\"

\"A freakish winter, so to speak,\" Radke said.  \"Most of them are mild and you plan accordingly.  You just don't know what mother nature's going to  do.\"

The town's new salt/sand mix will get put to the test Saturday night, with more snow predicted in the forecast. Marek wants his residents to take it easy driving and trust his crews to keep the main roads as clear as possible.