In custody: Man accused of shooting 2 officers in Delafield had warrant in North Dakota

In custody: Man accused of shooting 2 officers in Delafield had warrant in North Dakota

WAUKESHA COUNTY, Wis. (CBS 58) -- A manhunt ended in Waukesha County for a suspect accused of shooting two officers in Delafield.

The search shut down I-94 for hours Friday, Nov. 6, and prompted warning to people living in the area.

Early Friday, an officer from Delafield and an officer from Hartland were shot and wounded near the Holiday Inn Express on Golf Road, while responding to a report of a hit-and-run.

The suspect was identified as 23-year-old Nathanael Benton from Fargo, North Dakota, who was wanted for another violent offense. Two other people inside the vehicle, a 29-year-old woman and 30-year-old man -- both from Warsaw, Indiana -- were taken into custody.

Benton, however, ran off after the shooting. Police credit dozens of law enforcement agencies and citizen's phone calls for helping capture Benton.

"He had walked down to the bottom of our hill and when he got to the bottom he disappeared," said Angela Phillips, who called 911.

"I wanted to make sure that he was taken into custody you know, because we don't live that far away," Phillips said.

Cellphone video captured Benton being arrested less than a mile from the Holiday Inn Express without incident.

"Police men and women that were all surrounding this like field all the way up here and all the way around, kind of converged on him and took him down," said Owen Cieslak, who recorded the arrest. "He was just apprehended right back here and there was just tons of police officers everywhere. It was very comforting to feel that everything was under control."

After an unforgettable and chaotic manhunt, law enforcement and neighbors say they're relieved Benton is now behind bars.

"How quickly and how efficiently they had sealed off everywhere in Delafield, I just think they did a fantastic job," said neighbor Steven Green.

Watch an update from Waukesha County officials below:

Police say they're still investigating why Benton was in Delafield with two others. North Dakota courts say Benton had not been served with an arrest warrant for attempted murder.

DELAFIELD, Wis. (CBS 58) -- Delafield police say a man accused of shooting two police officers is in custody. They say 23-year-old Nathanael Benton was on the run for attempted murder in Fargo, North Dakota.

Benton was taken into custody a short time after 11 a.m. Friday, Nov. 6.

Authorities found him in the far south side of the city, hiding in a field.

Shooting suspect in custody. Nathanael Benton was found in a field less than a mile from the hotel where the shooting happened @CBS58pic.twitter.com/AlCnjdarA4

Police say they were called to the Holiday Inn Express in Delafield around 1:40 a.m., for reports of a hit-and-run. When they arrived, Benton shot at a Delafield and Hartland officer and the Delafield officer shot back.

Two other people who were in the car with Benton were taken into custody, but Benton fled.

Authorities say a tip from a man who saw someone suspicious in the area called it in.

Benton was taken to the Waukesha County Jail.

"It's good to have him off the streets," said Delafield Police Chief Erik Kehl.

According to Chief Kehl, the Delafield officer injured was moved out of the trauma unit and is in good spirits considering the circumstances. The Hartland officer was recovering with non-life threatening injuries.

DELAFIELD, Wis. (CBS 58) -- A manhunt is underway for a Fargo, North Dakota man, who is accused of shooting two police officers in Delafield, Wisconsin Friday morning, Nov. 6. According to the Fargo Police Department, the same suspect shot a man in Fargo on Nov. 1.

Police say 23-year-old Nathanael Ray Benton is a threat to the public.

Fargo police said a warrant was issued for Benton's arrest for his connection to a shooting that happened in Fargo on Nov. 1.

Benton is described as a white male, around 6’0’’ tall, 215 pounds, blue eyes, and brown hair. He wearing a flat brim hat, sweatshirt, and possibly khakis.

Authorities warn do not approach Benton. You're asked to call 911 if you see anyone matching Benton's description. 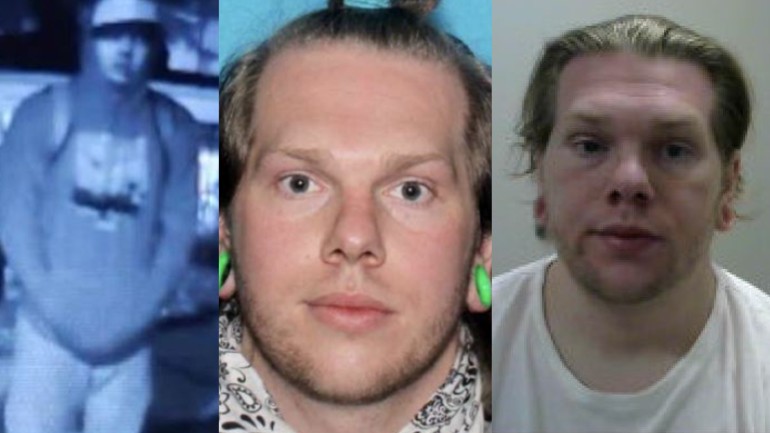 DELAFIELD, Wis. (CBS 58) – Authorities say two police officers were shot after midnight on Friday, November 6 in Delafield and the suspect is still on the run.

The suspect is described as a white man, around 6’0’’ tall, 215 pounds, blue eyes, and brown hair. He wearing a flat brim hat, sweatshirt, and possibly khakis. Authorities are identifying him as Nathanael Benton.

The suspect was last seen running south from the area of I-94 and Hwy 83. Police say he is armed and dangerous and urge the residents to stay in their homes.

DELAFIELD, Wis. (CBS 58) –  Authorities say two police officers were shot after midnight on Friday, November 6 in Delafield and as of 5:30 a.m., the suspect is still on the run.

The officers were responding to what they thought was a hit-and-run crash when they were shot near Highway 83 and Golf Road.

The suspect is described as a white man wearing khaki pants. People are being asked to stay away from the area and stay home. Authorities say there is a ‘tremendous number of resources’ searching for the suspect.

DELAFIELD, Wis. (CBS 58) – Two police officers have been shot in Delafield early in the morning on Friday, November 6.

Authorities say the suspect is on the run.

Police confirmed two officers shot in Delafield and they are looking for a suspect. Large police presence. Public urged to stay indoors @CBS58

People are being asked to avoid the area near Highway 83 and Golf Road and to stay in their homes.

WAUKESHA CO. (CBS 58) -- The Waukesha Co. Sheriff's Office is actively investigating an incident near Hwy 83 and Golf Rd. in Delafield.

DOT issued an alert around 2:15 a.m. on Friday, November 6 for a traffic incident that closed the freeway in both directions.

Around 4:16 a.m., Delafield residents received an automatic alert that asked citizens to avoid the area of HWY 83 and Golf Rd., and for residents in the area to shelter at the lowest level of their home/business.

There is a "law enforcement incident" happening at shopping center in Delafield this morning. @AndyDevineCBS58 will have live updates shortly on @CBS58pic.twitter.com/Z6y1EVNInj

The Holiday Inn Express near the intersection is taped off along with multiple police, sheriff and EMT.

CBS 58 has a crew on-scene and has reached out to WCSO for information relating to the incident.