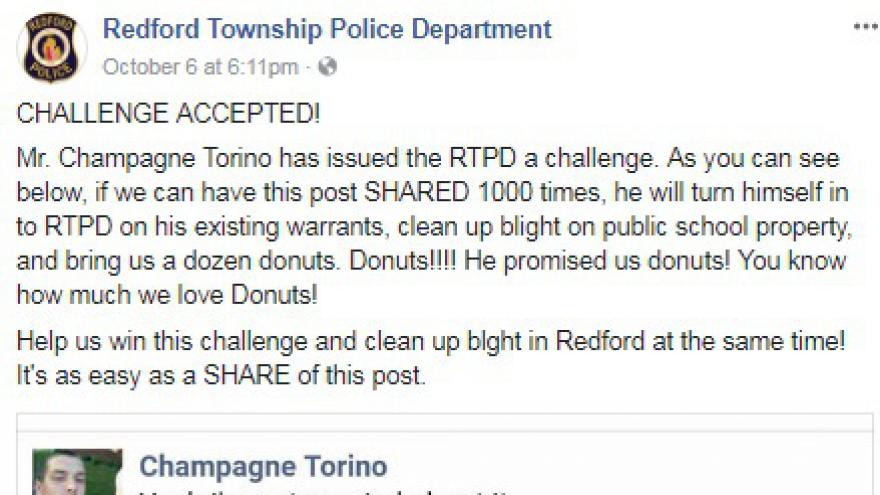 Michael (Champagne) Torino has several outstanding warrants for his arrest and a bit a bravado as well. When Torino became aware of the warrants he sent a challenge to a suburban Detroit police department via Facebook.

If your next post gets a thousand shares I’ll turn myself in along with a dozen doughnuts. And that’s a promise … and I’ll pick up every piece of litter around all your public schools let’s see if you can get those shares,” Torino penned to the Redford Township Police Facebook site.

Redford Township police accepted the challenge and got to a thousand shares pretty quickly.

“… Donuts!!!! He promised us donuts! You know how much we love donuts!” police re-posted to their social media community.

The post had almost 4000 shares on Monday and now the Redford PD await their man.

“It was a challenge and we thought we’d accept his challenge with humor — and we hope he’s a man of his word and will turn himself in,” said one of the officers charged with handling the Facebook site. The officer hopes he’ll turn himself in today — “since I’m here at the desk.”

Torino is wanted on a few misdemeanors, police would not specify the infractions, and has outstanding warrants for his arrest.

As of Monday — Torino is still on the lamb.