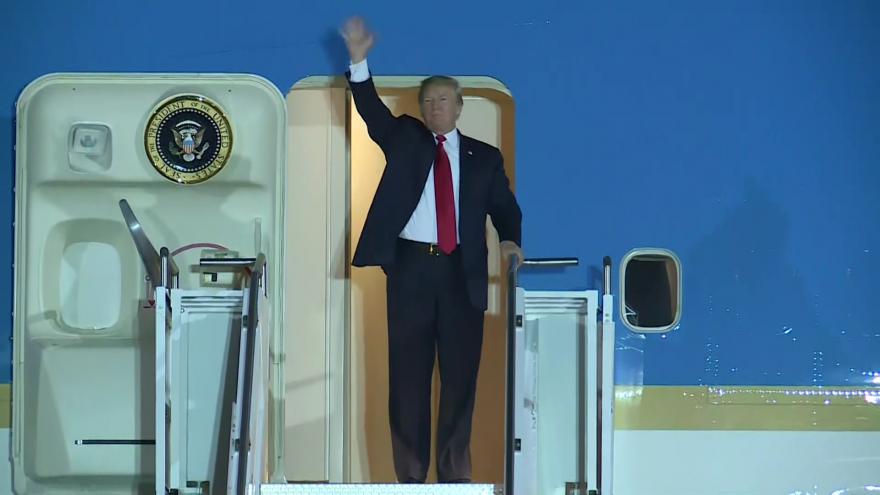 MIDDLETON, Wis. (AP) — Gov. Scott Walker, reiterating that he's in the toughest race for governor in his career, said Friday he would welcome a visit from President Donald Trump to help him out even as polls show most Wisconsin voters disapprove of the job Trump is doing.

Walker told reporters after a stop at Automation Components Inc. that he's said "100 times" he would be glad if Trump visited, even while admitting that anger over politics in Washington is fueling his opponents. Polls have shown Walker trailing Democrat Tony Evers, the state superintendent, with the Nov. 6 election five weeks away.

Trump narrowly won Wisconsin in 2016 and has not yet scheduled a campaign stop with Walker. Vice President Mike Pence plans to hold fundraisers for the two-term Republican incumbent in Green Bay and Eau Claire on Wednesday. Trump was last in the state in July for the groundbreaking of the Foxconn Technology Group plant in Mount Pleasant.

Walker said he's shown that he can work with Trump and disagree with him at the same time.

Walker said if Evers wins, that access would go away.

"Do you believe if Tony Evers is in office he calls the president up and says 'This is a big deal to the state of Wisconsin' that Donald Trump would say 'Yeah, I'm going to take care of it'?" Walker said.

In Walker's first six years as governor, Barack Obama, a Democrat, was president.

Evers spokeswoman Britt Cudaback said Walker has been a "doormat" for Trump because he's focused more on his political ambitions than what's best for the state. She cited Trump tariffs that are hurting Milwaukee-based Harley-Davidson and the state's agriculture industry and Walker's support, along with Trump, for repealing the national health care law and its protections for people with pre-existing conditions.

Walker said Trump's recently announced trade deal is good for Wisconsin dairy farmers because Walker has been raising concerns with Trump for the past year and a half. Walker also cited White House approval of the state's reinsurance plan and increase in federal highway money as signs of his good relationship with Trump.

"You don't have to agree with the president all the time to be able to be effective," Walker said. "What we've done is show we can be effective in getting things done for the people of the state of Wisconsin."

He said it's the most difficult run for state office he's ever been in. Walker has been in elective office since 1992. Walker won election as governor in 2010, defeated a recall attempt in 2012 and was re-elected in 2014. He ran for president in 2015, but dropped out in September of that year, trailing in the polls and out of money.

But Walker said having a Republican president makes it tougher for him in a midterm election.

"Any time a candidate running in a close, competitive state like Wisconsin has the same party in office in the White House, historically that's always been the case," Walker said. "I said for a year this is going to be a tough race. I also said complacency was going to be a part of it."

Recent polls have shown Walker trailing Evers. A new Marquette Law School poll is due next week. The last one , released Sept. 18, showed Evers up by 5 points over Walker. It also showed Trump with a 42 percent approval rating and 54 percent disapproving of the job he's doing.

"People are highly motivated by things related to Washington that are out of our control," Walker said. "I hope that in the end the voters in the state will look at what is happening in Wisconsin."