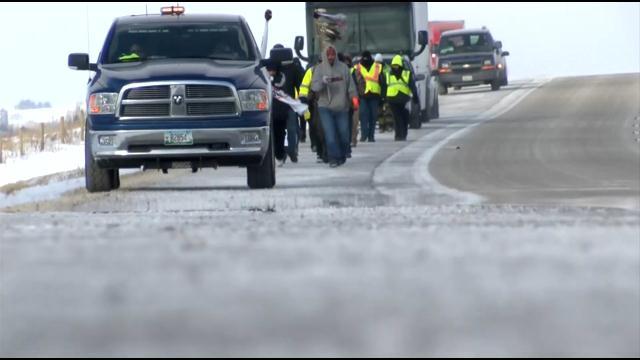 The Menominee Tribe marched more than 150 miles from the reservation in Keshena, Wisconsin to Madison.  They hope to meet with Governor Scott Walker one last time before the February 19. That's the day Walker has to finalize his decision on the proposed Kenosha Casino. Walker already said he won't approve the casino a few weeks ago, but the Menominee hope he changes his mind.  They want one last meeting with him to discuss it. Walker says that's not likely.

\"Why meet about something that's already been resolved,\" Governor Walker said. \"It's kind of like having a meeting about a bill that's been signed into law. Once the law is signed, another meeting isn't going to change what the law is.\"

Tribal leaders hope they can convince the Governor to sit down with them. But Walker says his administration has had 15 face-to-face meetings with the tribe. He says they spent 14 months reviewing legal, economic, and fiscal factors surrounding the proposal. In the end, he says he can't support it because it could leave a big hole in the budget down the road.

\"The decision is the same today as it was then. It doesn't change,\" Walker explained at a jobs announcement in Kenosha. \"We need to figure out ways to move forward. We've gone through this 14 months, we originally said we were going to take two months, we spent 14 months to look at this very specifically. We believe very clearly this would cost the taxpayers of the state hundreds of millions of dollars.\"

Tribal leaders just want to make sure they try everything they can to get the proposal passed, even though it's not likely.

\"I've never seen us come together for one common cause like this and stand up for what we believe is right,\" Tribal Council Member Craig Corn said. \"Whether he meets with us or not we know we tried and we did everything for those kids.\"

The Menominee will march and rally in Madison Wednesday.  It all starts at 11:00 am near State St. and Fitch Court. Then they will march to the State Capitol for a 12:00 pm rally.