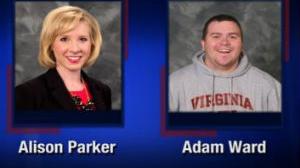 (CNN)A manhunt is underway for a gunman who fatally shot a local news reporter and photographer on live television during an interview outside Moneta, Virginia, on Wednesday morning.

Alison Parker was interviewing a woman at approximately 6:45 a.m. when shots rang out. Both women screamed.

As the camera fell to the ground, the audience caught the briefest glimpse of a man who appeared to pointing a gun toward the downed cameraman.

The station cut away to a shocked anchor, Kimberly McBroom, back in the studio.

Parker, 24, and Adam Ward, 27, were killed in the shooting at Bridgewater Plaza near Moneta, the station reported later.

The woman being interviewed, Vicki Gardner, executive director of the Smith Mountain Lake Regional Chamber of Commerce, was shot in the back and is in surgery, said Barb Nocera, the chamber's special projects manager said.

Authorities know the identity of the man believed to be the shooter, a law enforcement official told CNN.

\"We do not know the motive. We do not know who the killer is,\" Marks said. \"We do know the Franklin County sheriff ... they are working very diligently to track down both the motive and the person responsible for this terrible crime against two fine journalists,\" he said during the station's coverage of the shooting.

The station does not believe that the interview subject was injured, Marks said.

\"Our hearts are broken,\" Marks said on air, explaining that Parker's and Ward's colleagues are \"holding back tears.\"

McBroom described Parker as a \"rock star\" and said, \"You throw anything at that girl and she could do it.\"

Another journalist at the anchor's desk said Ward was engaged to be married to morning show producer at WDBJ, Melissa Ott, and Ward recently told her, \"I'm going to get out of news. I think I'm going to do something else.\"

Parker is the morning reporter for the Roanoke station and a native of Virginia, having spent most of her life outside Martinsville. She started with WDBJ as an intern, her biography on the station's website says.

She previously worked with another CNN affiliate, WCTI, in Jacksonville, North Carolina, near Marine Corps Base Camp Lejeune.

She is a graduate of James Madison University's School of Media Arts and Design in Harrisonburg.

CBS 58 sends our deepest condolences to the family and crew at WDBJ.