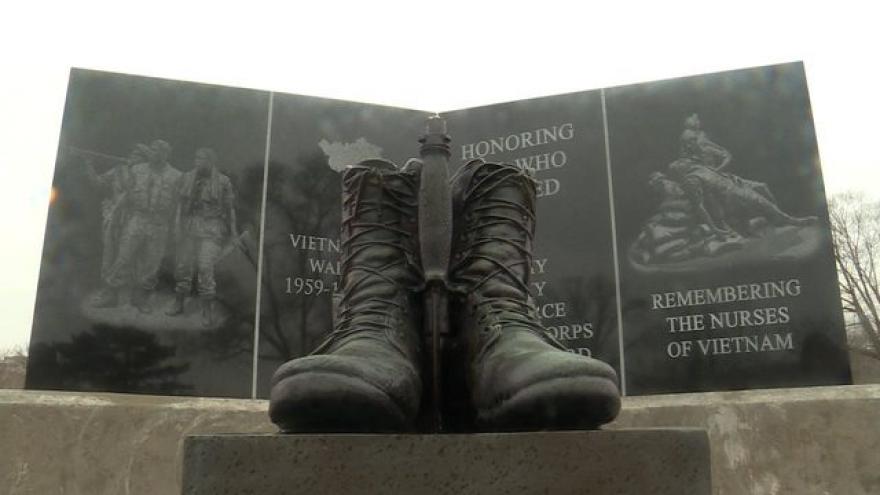 JANESVILLE, Wis. - (WISC) The Vietnam War memorial at Traxler Park in Janesville was vandalized, and the police department is asking the community to come forward with information.

Janesville Parks Director Cullen Slapak said parks staff found a piece of the bronze Battlefield Cross broken off and lying next to the monument on Monday morning.

“There was nothing else nearby, so [we] don’t know if somebody might have kicked it or leaned on it too hard or what really occurred,” Slapak said.

He said the vandalism most likely happened over the weekend. Parks staff reported the damage to the Janesville Police Department and called Tom Stehura, the president of the Janesville Patriotic Society.

“I was really disgusted. A Battlefield Cross is basically used in combat to remember a soldier who is killed in action,” said Stehura, who is also a Vietnam veteran. “You basically dishonored all those men and women who died during Vietnam.”

The Vietnam War monument is just one of the memorials on Veterans Plaza at Traxler Park. The Janesville Patriotic Society has been working on the memorial for more than a decade.

photo
Stehura said the patriotic society has raised all the money to build the plaza by selling personalized bricks. He said the group will use money from the sales to fix the statue. That could cost anywhere from $1,500 to $4,000 to fix, according to Stehura.

The group is first looking for a welder who could fix the statue at the park. If that doesn’t pan out, they would have to remove the base of the statue and bring it to a welder to fix. If they’re unable to find a local welder who can work with bronze, the group would send the statue back to the company who made it to re-melt it and recast it.

“We’d like to get it done as soon as we can, but we don’t want to rush it,” Stehura said. “We want to do it right like everything else we’ve done down there.”

Perry Morrison was fishing at the Traxler Park Lagoon on Friday. He said he looks at the memorial every time he comes to the park.

“Pride, I feel a sense of pride because it may not be people that I’ve ever known ... but pride in those people and sorrow for the ones that lost their lives,” he said. “They gave the ultimate sacrifice protecting our freedoms.”

Morrison said he didn’t notice the statue was vandalized but was upset when he found out.

“It’s terrible. I mean, you’re disrespecting the memory of people that gave me, him, anybody that comes into this park, the right to come here, the ability to come here,” he said. “Those guys fought for us. They didn’t just fight for themselves. They fought for us.”

The Janesville Police Department is asking anyone with information to call the department at 608-755-3100.