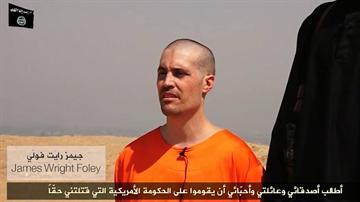 (CNN) -- A video released by ISIS shows the beheading of American journalist James Foley, who disappeared in November 2012 in Syria.

The video posted on YouTube contained a message to the United States to end its military operations in Iraq.

In the video, Foley is seen kneeling next to a man dressed in black. He reads a message, presumably scripted by his captors, that his \"real killer'' is America.

\"I wish I had more time. I wish I could have the hope for freedom to see my family once again,\" Foley can be heard saying in the video.

He is then shown being beheaded.

The National Security Council is aware of the video.

\"The intelligence community is working as quickly as possible to determine its authenticity. If genuine, we are appalled by the brutal murder of an innocent American journalist and we express our deepest condolences to his family and friends. We will provide more information when it is available,\" the agency said.

Foley disappeared in November 2012 in northwest Syria, near the border with Turkey. He was reportedly forced into a vehicle by gunmen; he was not heard from again. At the time of his disappearance, he was working for the GlobalPost.

The video also shows another American journalist. His life is said by the militants in the video to hang in the balance, depending on President Barack Obama does next.

The journalist is believed to be Steven Sotloff, who was kidnapped at the Syria-Turkey border in 2013. Sotloff is a contributor to Time and Foreign Policy magazines.

We have never been prouder of our son Jim. He gave his life trying to expose the world to the suffering of the Syrian people.

We implore the kidnappers to spare the lives of the remaining hostages. Like Jim, they are innocents. They have no control over American government policy in Iraq, Syria or anywhere in the world.

We thank Jim for all the joy he gave us. He was an extraordinary son, brother, journalist and person. Please respect our privacy in the days ahead as we mourn and cherish Jim.
Share this article: