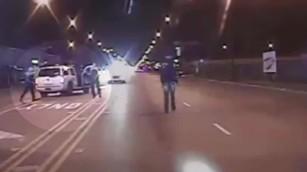 Chicago (CNN)Three years ago, police gunfire felled black teen Cedrick Chatman as he ran away from them and cameras rolled.

On Thursday, a judge released video of the deadly shooting. In its wake, a group of activists who have organized previous protests over shootings called for more on Friday.

And former police investigator Lorenzo Davis called for a change in the way investigations of officer-involved shootings and alleged excessive use of force are handled.

Investigators are too close to the department, he told CNN's Don Lemon. He is looking forward to seeing what a U.S. Department of Justice investigation turns up.

The police department fired Davis, he said, after he ruled Officer Kevin Fry's shooting of 17-year-old Chatman, who was unarmed, unjustified. But he had been at odds with the department over the internal assessment of police use of force for a while.

"I was fired not just for that case but for several cases including officer involved shooting cases and other excessive force cases," he said. "But I refused to change my findings in a number of cases. That was simply the last one."On video, Lorenzo saw a fleeing suspect who posed no danger.

"I pay most attention to Officer Fry. Mr. Chatman is simply trying to get away. He's running as fast as he can away from the officers. Officer (Lou) Toth is right behind him; he's doing the right thing. He's pursuing him. He's trying to capture him, while Officer Fry, on the other hand, has both of his hands on his weapon. He is in a shooter's position. He is looking for a clear shot."

Once Chatman runs past objects obscuring the officer's aim, Fry takes the shot he has positioned himself for, Lorenzo said.After Davis' firing, a new investigator was assigned, who ruled the shooting justifiable, and police accounts given after Chatman died told a story that differed in important points from Davis' assessment.

As Fry and Toth pursued on foot, police said, the 5-foot-7, 133-pound Chatman turned toward them.

"As Mr. Chatman approaches the corner, he makes a slight turn, a subtle turn to the right with his upper body. I see in his right hand a dark gray or black object," Fry said, according to court records.

So he fired four shots to protect his partner Officer Lou Toth, who was hot on Chatman's heels.

It turned out the object in Chatman's hand was a black iPhone box. Chatman had not pointed the object at either officer, Fry said.

He did not say anything or give any orders before opening fire. "I felt his threat was as such that I didn't have time to say anything," Fry said.

Rewind the video, and it starts with Chatman jumping out of a car police say was reported stolen.

He runs across the street and squeezes between two parked cars as Fry's partner, Officer Lou Toth, gives chase. Chatman then hits an all-out sprint along the sidewalk toward an intersection. Toth sprints behind him.

Fry draws his handgun in the middle of the street, plants his feet near the intersection in a firing stance as Chatman appears to still be running away. Chatman is out of camera shot at the time, and it does not reveal his moves.

The camera then pans over and shows a wounded, unarmed Chatman lying in the street as Toth handcuffs him. The whole event takes about 10 seconds. Then Toth places his right boot on top of Chatman.

Brian Coffman, attorney for Chatman's family, objected to Toth's putting his foot on the shot teen. "It's irresponsible and unreasonable," he said.With the shooting was ruled as justifiable, the officers have remained on their beats.

But attorneys for Chatman's mother, Linda Chatman, filed a wrongful death suit against them. They urged the release of the video to the public as part of that case.

In ordering the videos' release, U.S. District Court Judge Robert Gettleman indicated Fry might have put his partner's life in danger, saying Toth was running so close to the teen when shots rang out "you might say he was in the line of fire."There are no new criminal investigations against the officers. But Officer Fry, in particular, is facing public scrutiny with the video's release.

He has had 30 complaints lodged against him over the years, including 10 allegations of excessive use of force. The police department found every complaint against him to be unwarranted.

In one case in 2007, Fry and a partner shot a 16-year-old black male in a school alcove after seeing a shiny object around his waist and fearing for their lives. The object wasn't a weapon but a "shiny belt buckle," according to an independent investigation of the shooting.

The shooting was deemed justifiable, but CNN learned the city settled with the teen and his family for $99,000. There was no admission of guilt as part of the settlement.Although neither officer was charged in the Chatman case, two men were charged with first-degree murder in the teen's killing: his 23-year-old friend Martel Odom and a 22-year-old neighbor, Akeem Clarke.

Both were about 10 blocks away at the time of the shooting. The law in Illinois allows for anyone who sets in motion a chain of events that results in the death of another individual to be charged with murder.

The two later pleaded guilty to lesser charges.Outrage over police shootings have rumbled through Chicago since the November release of the fatal police shooting video of Laquan McDonald, who was shot 16 times. Attorney's for his family accused police of threatening witnesses and falsifying their accounts.

Chicago Alderman Anthony Beale has criticized investigations into police violence as being flawed.

"For years we've had a systemic problem with the police officers protecting one another. And that's why you have such distrust in the community," he told CNN's Don Lemon.

But he also sees police as an essential part of the community and was worried that they might feel intimidated by the scrutiny.

"Now that the spotlight is being put on the police department, they're no longer being aggressive; they're no longer doing the job that they are capable of doing," he said. His suggestion was to do things by the book. That way they would still be doing their jobs and staying out of trouble at the same time.Protesters have targeted Mayor Rahm Emanuel, at times calling for him to step down, and they have vowed to continue.

The city's prior opposition to releasing the videos of Chatman's shooting -- as late as December -- has brought on new heat. It seemed to contradict Emanuel's pledge of an era of new transparency.

But late Wednesday, the city filed a motion to vacate its previous objections.The city made the move as part of the transparency effort and is considering how to handle videos of police shootings in the future, said Jonathan Green, an attorney representing the city.

Chicago had long opposed the release of such videos while investigations and court hearings were underway, but now with the spread of cell phone cameras and surveillance cameras, the stance may change.

"The city recognizes...we're in a new world," Green said.Judge Gettleman scolded the city and mayor's office, saying it was "irresponsible" to waste taxpayers' money and the court's time with its previous opposition.

"I'm very disturbed at the way this happened," he said. "This should not have happened the way it did."

He blasted city attorneys for the December motion in which they stated it was not clear from the videos who fired at Chatman. Gettlemen said that wasn't true: "It's clear to me who fired the shots."