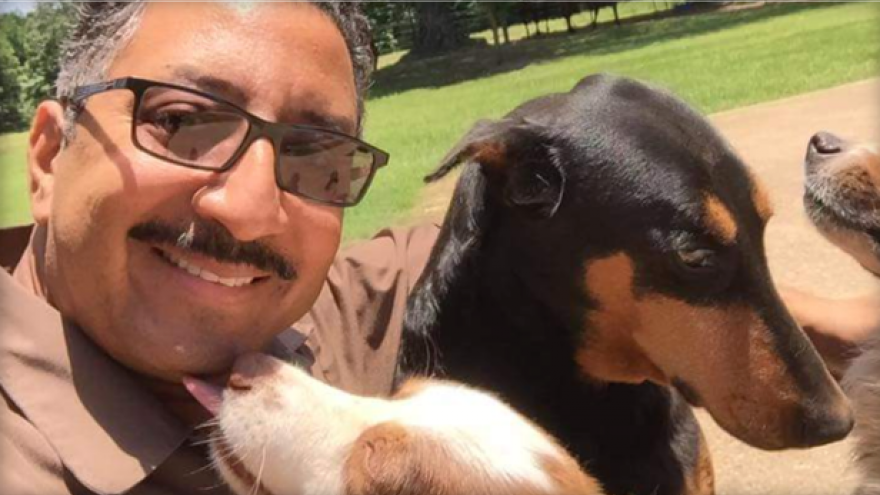 Doniel Kidd snaps a selfie with dogs he befriended along his route. COURTESY STACI BURNS

The delivery driver is a well-known animal lover in at least one Athens, Louisiana, neighborhood, where he has befriended the dogs of one of his customers.

Earlier this month, Staci Burns spotted the driver sitting on her driveway, snapping selfies with her three pups: Reba, Buster and Jade.

The sight brought a smile to Burns' face and she took a quick video and posted it on her Facebook page with the caption, "When you have the best UPS man on the planet..."

The video went viral with 1.4 million views and more than 16,400 shares, with thousands of people leaving comments.

"If I was a UPS man," some Facebook users joked.

"What I want to do every time I pass a pup," another added.

While the video is both hilarious and adorable, Burns says there's a reason why the dogs love Kidd so much — and why one dog, in particular, has a little more affection for him than the rest.

Kidd has a special bond with Burns' Australian shepherd named Reba. One day, while driving along his regular route, he spotted the dog sitting on the side of the road — miles away from home.

Luckily, he knew right where to deliver the lost dog.

"We live in the country and she went through a phase of going off on adventures and also following me when I left without my knowledge," Burns told CBS News. "Doniel saw her miles from home and pulled over to get her. Of course, she hopped right in and he delivered her home."

Ever since then, Kidd has referred to Reba as his "baby," and Burns has welcomed him into her home with open arms.

"He asks about her if he doesn't see her," Burns said. "She loves to jump up in the truck and beg him to take her with him."

Whenever they hear the roar of his UPS truck engine, they speed around the corner to greet him. And Burns says he can play with the dogs whenever he wants.

"Doniel is incredibly well known in our area, he is always extremely happy, caring, courteous, and the most kind hearted man," Burns said.