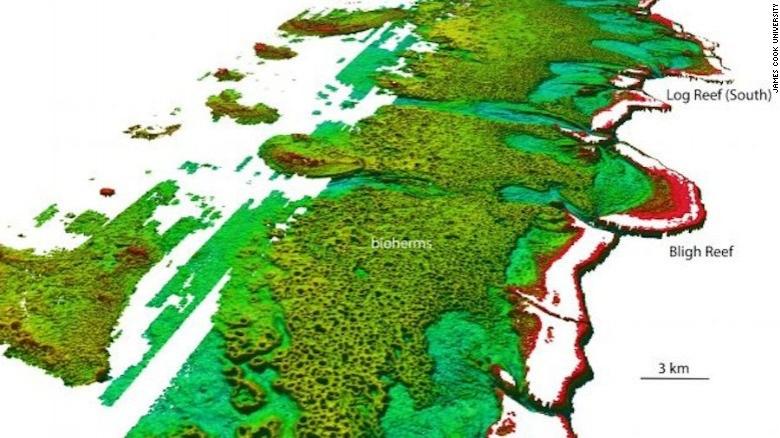 (CNN)Australia's famed Great Barrier Reef may be in trouble -- but it's not all bad news coming out of the region.

The discovery of a large field of unusual circular mounds was announced Friday by a group of scientists from James Cook University, University of Sydney and Queensland University of Technology, who worked with laser data from the Australian Royal Navy.

Mardi McNeil from Queensland University of Technology and lead author on the new research paper called the discovery "vast."

"We've now mapped over 6,000 square kilometers (about 2,300 square miles)," McNeil said. "That's three times the previously estimated size, spanning from the Torres Strait to just north of Port Douglas."The unique-looking structures are created by a green algae Halimeda bioherms, they said. When the algae dies, it forms white cornflake-like residue of limestone, eventually building up large rings -- each 200 to 300 meters (655 to 984 feet) across and up to 10 meters (33 feet) deep at the center."We've known about these geological structures in the northern Great Barrier Reef since the 1970s and 80s, but never before has the true nature of their shape, size and vast scale been revealed," said Robin Beaman, a professor at James Cook University and part of the team that discovered the reef.

"The deeper seafloor behind the familiar coral reefs amazed us," Beaman added.

Less than 15% of the Earth's oceans deeper than about 200 meters (655 feet) have been mapped, according to the group.Beaman told state broadcaster ABC that the rings could shed light on historic temperature and conditions in the Great Barrier Reef.

"Just like tree rings — the rings can tell you the age of when it was formed and the environment it was formed in. So you've got 20 meter-thick piles of sediment that can tell you an awful lot about past oceanographic history," he said

The discovery comes after the revelation in April that over 90% of the Great Barrier Reef shows signs of bleaching. The phenomenon has been accelerated by record heat this year with 2016 well on pace to become the hottest year ever recorded.