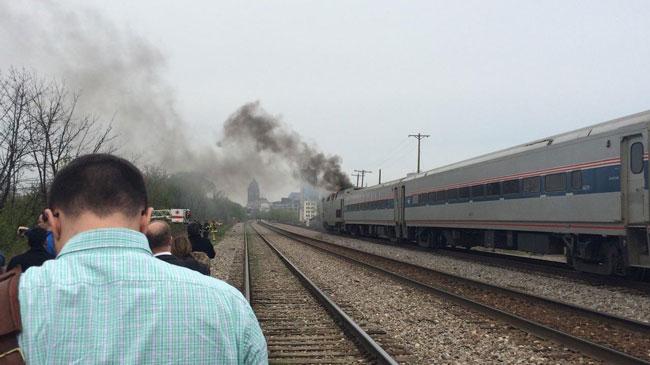 An Amtrak train has caught on fire near Barclay and Walker Streets.

The fire started and was contained in the engine compartment of the train, according to an Amtrak official.

There were six cars on the train.

It happened around noon.

The train was carrying 5,000 gallons of diesel fuel which was a concern for firefighters. They used their special foam because of the fuel. Access was a bit of an issue at first because the train is up on a ridge. About 60 firefighters responded, according to the fire chief on the scene.

The train was coming from Chicago to Milwaukee.

Milwaukee Fire Department said it is under control.

The Milwaukee Police Department was called at 12:05 pm.

All passengers have been taken off the train. MPD assisted with evacuating all the passengers. The passengers were asked to the walk to the back of the train to exit because the fire was at the front. No reported injuries.

There were 51 passengers on board when the fire happened.

Some of them were bused by MCTS to the Amtrak station in Milwaukee. While others passengers arranged their own transportation.

The 1pm trains schedule to depart from Amtrak station in downtown Milwaukee has been canceled.

Wisconsin Railroad Commissioner Jeff Plale is on his way to the scene to learn more about the cause of the fire and impact on the passengers.

This video was shot and submitted from @DrewWLake.