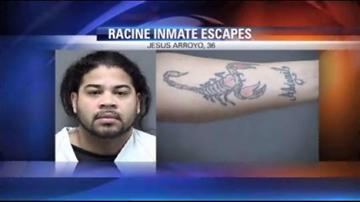 MILWAUKEE -- The Racine Police Department is searching for escaped prisoner Jesus Arroyo Santiago. He escaped from a Department of Corrections agent near 8th and Wisconsin Ave. around 12:25 p.m.

Arroyo headed southbound on foot shortly after his escape. Police say Arroyo should be considered armed and dangerous.

Anyone with information on Arroyo should call 911 immediately.