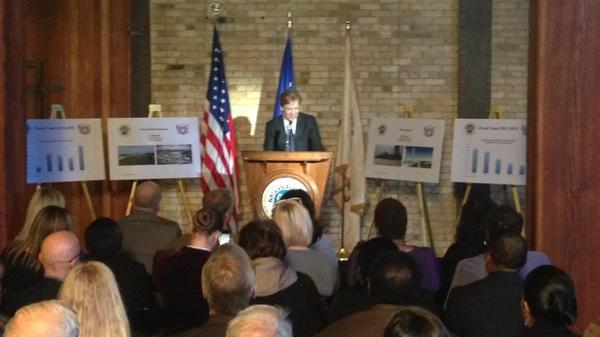 UPDATE: In a 12 to 5 vote on Monday, Milwaukee County Supervisors overrode County Executive Chris Abele's veto of a reduction in his office budget.

ORIGINAL: Milwaukee County Executive Chris Abele announced Friday that he would veto one of the County Board’s 44 amendments to his 2017 Budget.

The only amendment, out of a total 44 amendments, that the county executive is vetoing cuts the County Executive’s Office staff by $188,150, or approximately three of eight staff members.

While the number of employees has stayed frozen, the dollar amount of the budget for the County Executive’s Office has increased over the past five years, as have the budgets for other small departments such as the treasurer, register of deeds, corporation counsel, county clerk, and other offices. Because departments like the County Executive’s Office are small and the budget is made up almost exclusively with salary dollars (i.e., not a lot in services/commodities/other expenses), maintaining a flat budget is not possible without cuts to employees. That is why these small departments have been cost-to-continue budgets -- they are not able to absorb year-to-year inflationary increases like larger departments can.

Chairman Lipscomb issued a statement in response to the veto saying that when Abele was first elected in 2011 he pledged to freeze the executive office budget but has since increased salaries and wages by 30%. The statement goes on to say, "It's time for Abele to share the burden of Milwaukee County's fiscal challenges, like he promised."

The county executive expressed praise for the Board’s work on implementing a $30 vehicle registration fee, particularly the Board’s suggestion to implement a taskforce to examine ways to make the VRF more progressive, and looks forward to the opportunity to partner on solutions. While he continues to agree with the assessments of the independently elected comptroller and the independent Public Policy Forum that a $60 VRF is required to sustain County services and investments, the county executive believes the $30 fee will put the County in a stronger, more sustainable position than we would be without it.

“I hope this will be the beginning of a true dialogue and partnership about how we can put the County on a more sustainable path through the use of a VRF, as well as lobbying for other options not currently available to the County,” County Executive Chris Abele said. “With cuts to state and federal funding, the only way we can accomplish this is by working together.”

The county executive is also accepting the Board’s changes to the GO Pass program and more than $2 million of new parks projects, however, he asked that the Board continue the discussion on how to ensure we can invest in parks and other priorities sustainably. New sources of revenue are required to continue making these types of investments. The Finance Committee had some creative discussion about new sources of revenue, and the county executive is hopeful that these conversations can continue in the coming months so that we can continue to invest in our award-winning Parks system.