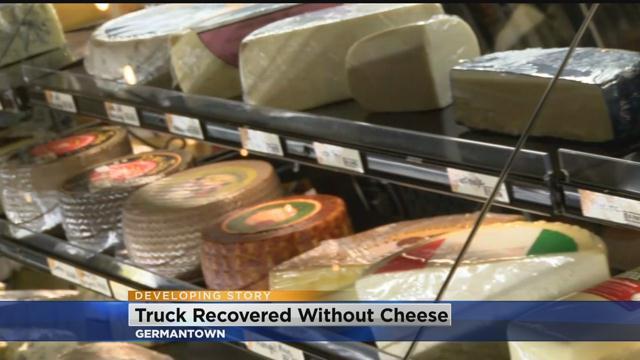 The 41,000 pounds of Le Sueur Parmesan Cheese was recovered at a facility in Grand Chute, Wisconsin, according to a press release by the Marshfield Police Department.

The cheese had been reported stolen on January 15 to the Marshfield Police Department. It was valued at $90,000.

The cheese was reported stolen after it did not arrive in Elgin, Illinois.

UPDATE: Friday evening, Germantown Police Detectives located the cheese products in the City of Milwaukee. No arrests have been made, and no other information can be released at this time due to it being an active investigation.

ORIGINAL: A block surrounded by warehouses in Germantown, Wisconsin is where the owner believes the well-orchestrated cheese theft took place.

The stolen trailer was backed up to an empty one. The cheese was transferred, and the bandits drove away, leaving the stolen vehicle without 70,000 dollars of Wisconsin cheese inside.

Police were hoping to find 70,000 dollars worth of cheese, but instead found an abandoned semi trailer this morning.

It started at D & G Transportation in Germantown.

A trailer full of locally made cheese, was set to be delivered at stops around the nation.

The president of the transportation company says they caught surveillance footage of that trailer full of cheese being hooked up, and driven away.

"We found out where the tractor was and kind of mapped its progress through the city," said Lt. Todd Grenier, Germantown Police Department.

As Germantown Police try to track down the cheese bandits, and all that they stole, a nearby city is investigating another cheese mystery.

The one in Marshfield was a week earlier there's no connection yet on these two cheese thefts.

"We're trying to reap some information to the location of this cheese," said Lt. Darren Larson

If that cheese is found, CBS 58 was told it can't be eaten!

The truck the cheese was in was sealed and when the thieves opened the truck, they broke the seal, a federal law, and the cheese at that point, becomes useless  legally.