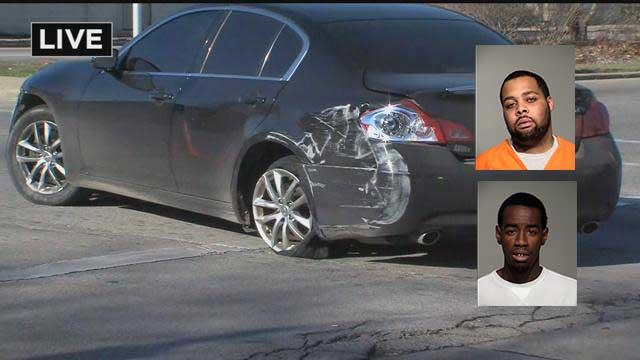 Two of the suspects in the I-43 shooting have been charged each with four counts of first degree recklessly endangering safety with a weapon and bail jumping charges, according to the criminal complaint.

Jerome Johnson and Martez Maclin-Dyson are two of the six alleged suspects involved in the I-43 shooting.

CBS 58 has requested criminal complaint for the other two suspects in custody.

Gun Battle on the Freeway

The driver of the white four-door Chevrolet Impala said he had entered Southbound I-43 at North 8th Street. He was driving on I-43 at West Highland Avenue and heard pops and then saw his right rear window shatter.

The shooting vehicle was described as a black car.

The black car swerved over to the center lane while continually shooting at him.

The driver believed his car was struck “twenty-some times.”

The driver said he never came into contact with the black car in the past and never had any road rage incidents with anyone at the time of the incident.

The passenger in the car returned fire with his own firearm back towards the black car.

The passenger was shooting through the closed front passenger window towards the black car, and the driver stated that he had no idea how many times he shot at the black car.

The driver believed they were trying to kill him.

The shooting ended at the end of the Marquette Interchange at Southbound 11th Street on-ramp.

The driver stated he continued fleeing from the black car and exited at West National Avenue and stopped at West Walker Street and South 10th Street.

The driver than realized he had been shot and suffered a graze wound to his right thigh area.

A witness on the freeway said he observed multiple gunshot holes in the right front passenger window. The witness said the right window was broken out. He said the white Impala was moving at a high rate of speed behind him.

RELATED LINK: I-43 Reopens after Police Investigation; One lane Blocked

The  black sedan exited at the North 11 Street on-ramp and almost collided with an unmarked Milwaukee Police Department vehicle.

The black sedan made a turn in front of the detectives’ unmarked squad and turned right onto West Wells Street going westbound.

At this the police turned their lights on. Subsequently the detectives witness rubber from one of black sedan’s tires fly off.

The two defendants fled over a fence and entered a apartment building at 1133 North 18th Sreet.

They entered an apartment and remained out of view for a short period of time.

Both defendants were out on bail for other crimes.

The two suspects who went east have not been found.