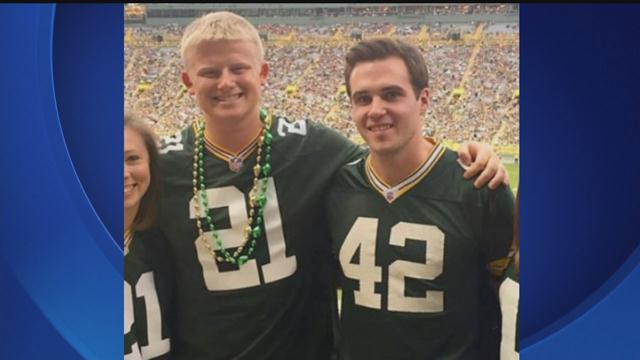 Two Packers fans think they know the key for the team to win. It's not Aaron Rodgers, not an improved health on the defense; it's them - the fans Mike and Charlie.

The two want to bring their good luck to the Packers in the playoffs and they say they need your help to do it.

Every good Packers fan thinks that they have some control in the outcome of the games. Maybe it's the way they sit on the couch or wearing a lucky sweatshirt to Lambeau.

But two area fans have taken this idea one step further.

“The packers play better with us there,” said Mike and Charlie.

If you count preseason, Michael Curran and Charlie Houser have attended seven home Packers wins this season, “7 and 0 in our games, the other three were one and two.”

The duo thinks this makes them lucky charms and they think you might want to pay to send them to Lambeau.

Mike and Charlie want $1,000 to pay to send them to Lambeau, and they've compiled statistics; actual charts and graphs to make their case, “plus-16 turnover margin versus other home games.”

This is a novel idea, but in the eyes of CBS 58 Bill Walsh, there is a real problem with this listing. The Packers need a win or tie, or help from Washington to make the playoffs. The fundraiser is for the first playoff game, which assumes they make the playoffs. If we believe in superstition, isn't that a jinx?

“We're confident in our Packers, ok? We're ready for this to happen. Fingers are crossed, knock on wood, we just figured we'd get this rolling as soon as possible,” said Mike and Charlie.

Mike and Charlie clearly believe. If you believe as well you can click here to contribute to their Go Fund Me.