Turkey says it shot down warplane at border 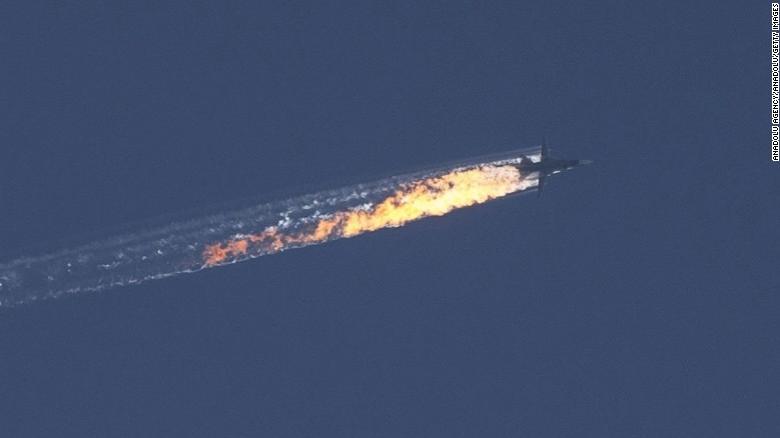 The Turkish military says it shot down an unidentified warplane Tuesday near the Turkish-Syrian border, contending it repeatedly violated Turkish airspace and ignored repeated warnings. Turkey's semi-official Anadolu news agency cites Turkish Presidential sources in reporting that a Russian SU-24 was "hit within the framework of engagement rules" in Syria's Bayirbucak area near the Turkish border.

A Russian warplane crashed Tuesday on the Syrian side of the Turkey-Syria border, a Russian Defense Ministry spokesperson told CNN.

The cause of the crash and the fate of the pilots remains unclear, although the Russian Defense Ministry said they ejected, according to state-run Sputnik news.

If it turns out that the plane was shot down, that would greatly exacerbate tensions in one of the most fraught regions of the world.

"According to the preliminary reports, the plane was gunned down from the ground," Sputnik reported."The Su-24 bomber jet was in Syrian airspace at the altitude 6,000 meters, the Russian Defense Ministry said," according to Sputnik. "The pilots were reportedly able to parachute out of the jet before it crashed."

Anadolu Agency reported that a warplane of "unknown nationality" crashed on the Syrian side of the border."A war plane with unidentified nationality fell near the Turkish border in Syria's Bayirbucak region," the Anadolu Agency reported. "The moment of the plane falling into Bayirbucak region across from Hatay's Yayladagi was captured on camera. The pilot's evacuation via parachute was also captured. Heavy smoke has been seen in the area where the plane fell."

The area referred to by the news agency is in southern Turkey, close to the Syrian border.

The Turkish government is strongly opposed to the Syrian regime of Bashar al-Assad. Skirmishes between Turkish and Syrians have taken place in the past, with Turkish officials accusing the Syrian planes of violating Turkish air space.

Russia, however, has been supporting the Assad regime, and has had warplanes active over Syria.

This kind of incident might ultimately have been inevitable, given the number of countries involved either directly or indirectly in the Syrian war. Currently the US, Russia, France, the Gulf states, Turkey and Israel are involved in one way or another in military activity in Syria.In March, 2014 Turkey shot down a Syrian fighter jet after the warplane strayed into its airspace, according to then-Prime Minister Recep Tayyip Erdogan. Erdogan is now the country's president

"Our F-16s went up in the air and shot that plane down. Why? Because if you violate my airspace, then from now on, our slap will be hard," Erdogan told supporters at a campaign rally in 2014.

But state-run media in Syria called the shoot-down an act of "blatant aggression" and said the downed plane was over northern Syria at the time.

However, the cause of Tuesday's crash remains unknown.