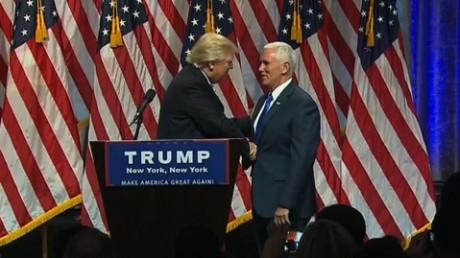 On Saturday morning, just days before the presumptive nominee heads to the Republican National Convention in Cleveland, Donald Trump announced that Indiana Gov. Mike Pence was his vice presidential pick.

"Indiana Gov. Mike Pence was my first choice. I've admired the work he's done, especially in the state of Indiana," Trump said at a news conference in midtown Manhattan. "I admire the fact that he fights for the people and he fights for you."

Despite Trump's original purpose for the news conference, it took nearly 30 minutes before Pence made an appearance at the podium, with Trump first going off on winding tirades against Hillary Clinton, radical Islamic terrorism and international trade deals before periodically declaring he would go "back to Mike Pence" in his speech.

"I saw how NAFTA has drained our manufacturing jobs... NAFTA is the worst economic deal in the history of the country," Trump said of the North American Free Trade Agreement, signed by former President Clinton.

"It's a horror show," he added, noting that his vice presidential pick came after a long study of Indiana and its manufacturing sector. Pence, however, strongly backed NAFTA while serving in Congress.

Trump, in his speech, also unwittingly highlighted another policy point where the two diverged: the Iraq war.

"I said don't go into Iraq," he said. "Nobody cared because I was a businessperson. I was a civilian. Take the oil. Many, many calls I've made. You take a look... I was the one that predicted it and everybody said he's wrong, he's wrong."

In 2002, Pence, as a congressman, voted for the authorization to use military force in Iraq.

Trump weighed in on Friday's failed military coup in Turkey as well, saying that he had "so many friends" that were "great people" in the country.

"We wish them well," Trump said. "A lot of anguish last night, but hopefully it'll all work out."

Of his Pence pick specifically, Trump pointed to -- "other than he looks very good" -- a need for a unified GOP ahead of the general election.

"One of the reasons is party unity, I have to be honest," he said. Pence, the reality television star said, was "highly respected" and a "highly talented" executive that led the state of Indiana to job growth.

For the governor's part, upon finally joining Trump at the press conference, Pence stuck to some battle-tested catchphrases from his days as a congressman while at the podium.

"I come to this moment deeply humbled and with a grateful heart," Pence said. "People who know me well, know I'm a pretty basic guy: I'm a Christian, a conservative and a Republican -- in that order."

The Indiana governor, who said he had received the news of Trump's pick in a Wednesday call, testified that the New Yorker was "a good man."

"I thank Donald Trump, the confidence you placed in us and I accept your invitation to run and serve as vice president of the United States of America," Pence said.

On Wednesday night, Trump had tweeted that he would unveil his VP choice on Friday at 11 a.m.

Then, late Thursday evening, Trump postponed the scheduled Friday press conference --ostensibly because of the deadly Bastille Day truck attack in Nice, France, which resulted in the deaths and injuries of dozens.

By then, news had leaked that Pence was already slated for the No. 2 slot, with CBS News confirming reports about the Indiana governor.

And so Trump seemed to stick with his original plan: announce his veep pick Friday morning -- only this announcement came via Twitter:

Amid media reports that Trump had been having second thoughts about picking Pence as late as Thursday night, the billionaire tweeted on Saturday morning that the Indiana governor had been his "first choice from start":

General election rival Hillary Clinton took the opportunity to knock Trump over the reported waffling on his veep pick.

But in an interview with MSNBC a day before Trump's Twitter declaration, Christie admitted that he would be "a little bit" bothered if the veep job didn't fall to him.

"I mean, obviously, I'm a competitive person. So I'm not gonna say it won't bother me, if I'm not selected. Of course it bothers you a little bit," he said. '"Cause if you're a competitive person, like I am, and you're used to winning, like I am -- again, you don't like coming in second. Ever."