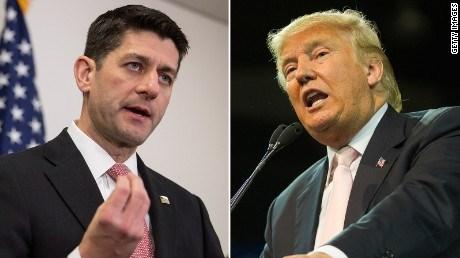 (CNN) Donald Trump and House Speaker Paul Ryan concluded their highly anticipated meeting Thursday amid early signals that the Republican Party will work to piece itself together after a fractious primary.

In a joint statement from Paul Ryan and Donald Trump they said:

"The United States cannot afford another four years of the Obama White House, which is what Hillary Clinton represents. That is why it's critical that Republicans unite around our shared principles, advance a conservative agenda, and do all we can to win this fall. With that focus, we had a great conversation this morning. While we were honest about our few differences, we recognize that there are also many important areas of common ground. We will be having additional discussions, but remain confident there's a great opportunity to unify our party and win this fall, and we are totally committed to working together to achieve that goal. We are extremely proud of the fact that many millions of new voters have entered the primary system, far more than ever before in the Republican Party's history. This was our first meeting, but it was a very positive step toward unification."

Republican National Committee Chairman Reince Priebus said the meeting was "great," tweeting that it was "a very positive step towards unity."

For Trump, the meeting tested his ability to reconcile with the Washington establishment that he and the voters have scorned.

For Ryan, it will help shape his own future with a party increasingly impatient to get behind its nominee and win back the White House.

A top Trump aide had said there are "no expectations at all" of an immediate Ryan endorsement, describing the Thursday session as an "opening conversation" in an ongoing process of party unification.

Priebus had been talking to Trump daily leading up to the meeting, a source familiar with the preparations told CNN, as well as speaking extensively with Ryan, with whom he shares Wisconsin ties.

Hordes of reporters mobbed the front entrance of the GOP headquarters and gathered across the street from an alleyway behind the building, but Trump's motorcade evaded the glare of the cameras and led the presumptive GOP nominee to the back entrance.

Inside, Trump was slated for a slew of meetings, the first of which is with Ryan and Priebus, who brokered the meeting in hopes of gluing the GOP's jagged divisions back together after Trump became the presumptive nominee and Ryan dropped a bombshell last week by refusing to back the brash billionaire.

Trump also met with the rest of the House Republican leaders, only one of which has not yet endorsed Trump and is holding out alongside Ryan.

The businessman then headed to meet with Senate Republican leadership before he departs Washington around 2 p.m.

Democrats, meanwhile, were more than happy to paint Trump and congressional and party GOP leaders as already united.

"I guess he should be giddy about a Trump presidency. Donald Trump is everything that (Senate Majority Leader Mitch McConnell) and his party could ever want in a nomination," said Senate Democratic Leader Harry Reid on the Senate floor, adding that Trump's "positions are identical to the Republican Party platform."

Immigration activists and other protesters were on site Thursday morning to remind those Republicans weighing whether to rally behind Trump of the division Trump has sowed in the country, holding signs calling the presumptive nominee "dangerous," "divisive" and "deceitful." A Trump impersonator with a bullhorn held bags with "$"s printed on them.

In private and in public, Ryan is sending the message his party wants to hear: The GOP will be united this fall.

In a private meeting in his office Wednesday, Ryan told his colleagues who support Trump that his high-profile sit-down with the billionaire businessman would be the start of a continual dialogue between the speaker's office and the presidential campaign, sources said.

Speaking to the full House GOP Conference in the basement of the Capitol, Ryan suggested that the party's focus this fall will be on defeating Hillary Clinton -- not the internal GOP bloodbath.

"The United States cannot afford another four years of the Obama White House, which is what Hillary Clinton represents," Trump and Ryan said in their statement following the meeting. "That is why it's critical that Republicans unite around our shared principles, advance a conservative agenda, and do all we can to win this fall."

But according to several allies of the speaker, Ryan went into the meeting seeking some assurances for himself.

He wants to ensure Trump will not hurt his House Republican majority by undermining his colleagues and the carefully crafted election-year agenda the GOP is painstakingly trying to create. He wants Trump to communicate a positive vision, avoid using foul and incendiary rhetoric and keep the party united on its core conservative principles. And as Ryan told reporters Wednesday, he just wants to "get to know" Trump.

Yet, his strategy -- to publicly announce last week he won't yet back Trump -- also has put Ryan on the firing line, including among his own members who say they were blindsided that the leader of their party undermined their presumptive nominee just as the GOP was trying to heal after a divisive primary.

Ryan's revelation to CNN's Jake Tapper that he was "just not ready" to support Trump dominated headlines and put a spotlight on the rift between the real estate mogul and his party.

"Well it sure doesn't make it look like we're all on the same page, does it?" Rep. Mark Amodei, R-Nevada, said of Ryan's public stand. "What's the matter with saying, 'I disagree with him on this and that but we're all wearing the same jersey. So guess what? We want to win the game, and we go have a fight in the locker room.'"

Asked if Ryan's comments bothered him, Amodei said: "Yes, it does. I'm trying to figure out what the upside is."

Rep. Lynn Westmoreland of Georgia, a friend of Ryan's, was surprised by the speaker's lack of endorsement.

"It just seemed like he could have said, "I"m going to support whoever our nominee is that comes out of Cleveland," Westmoreland said. "Why do you want to make mad who you are trying to go into a room and negotiate with?"

On the Senate side, McConnell told reporters this week that Trump could be "competitive" in the fall, a show of support from the party leader.

Sen. Shelley Moore Capito, a West Virginia Republican who has not yet said she'll back Trump, said she has a point to make with the front-runner during the Thursday meeting.

"The other thing is the tone that he has had," Capito said. "I'm going to express that I don't think that's a productive tone for the rest of the campaign, and I think it would affect the intensity in which people campaign for him."

On the Hill, some Republicans are starting to warm up to Trump -- including ones running in tough races.

Already, other meetings between Trump and other House factions are in the works, including with the conservative House Freedom Caucus. Many conservatives expect that group and others to get behind Trump. The longer Ryan holds out, the more isolated he could become in his conference.

But Trump's detractors on Capitol Hill believe Ryan has provided cover to his colleagues in tough races by showing some distance from the candidate.

Rep. Carlos Curbelo -- one of the most endangered House Republicans in the country -- said: "I'm very grateful for the speaker for doing this."