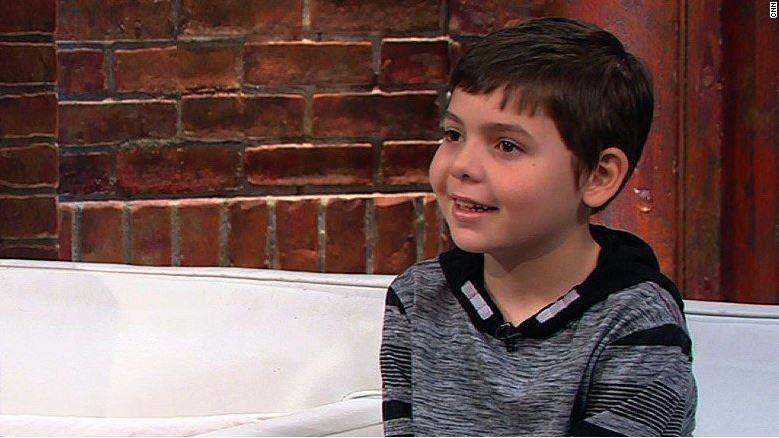 (CNN) All 8-year-old Joe Maldonado wanted was to keep hanging out with his Cub Scouts friends.

But after a month of science experiments and barbeques at a New Jersey chapter, he was told he's no longer welcome.

The reason he was given: he was born a girl.

Joe is transgender. Until two years ago, he'd gone by Jodi.

"I felt very upset but then very angry because it's just not fair that because I was born a girl they won't let me in," Joe told CNN.

Kristie Maldonado, Joe's mother, says she told the Scouts chapter before registering Joe that he's transgender. She says she was told the Scouts policy is to "go by birth certificate, what you're born with."

But Effie Delimarkos, director of communications for the Boy Scouts of America, said in a statement that Joe "does not meet the eligibility requirements to participate in this program," and that the Boy Scouts referred him to alternative programs.

The statement added that the Boy Scouts "defer to the information provided for an individual's birth certificate and their biological sex" in determining who can join.

The Boys Scouts of America have come under fire in the past over LGBT issues. Last year, it finally lifted the ban on gay adults as Scout leaders. And it was only three years ago that it allowed allowed openly gay youths to join scouting.

Girl Scouts of the USA, a separate organization, had addressed transgender issues a different way.

Its policy says that "if the child is recognized by the family and school/community as a girl and lives culturally as a girl, then Girl Scouts is an organization that can serve her in a setting that is both emotionally and physically safe."

Sarah McBride of the Human Rights Campaign called on the Boy Scouts and their local chapters to follow the lead of the Girls Scouts.

"To deny a young transgender person opportunities granted to their peers is harmful and mean-spirited. It reinforces bullying and prejudice towards young people," McBride said.

Dr. Johanna Olson-Kennedy, the Medical Director of the Center for Trans-youth Health and Development at Children's Hospital Los Angeles, added that "this early experience of discrimination for these children is an unnecessary message of rejection," rooted in lack of knowledge and experience.

Paul McHugh, a professor of psychiatry at Johns Hopkins University School of Medicine, said the Boy Scouts have the right to decide who joins.

But Jean Malpas, the director of the Gender and Family Project at the Ackerman Institute, disagrees.

Malpas thinks the Boy Scouts' decision reflects a common misunderstanding of the difference between assigned sex and gender identity.

"It would make sense for an organization based on gender categories to use gender, not assigned sex, as a membership requirement," Malpas said.

But even if the Secaucus chapter chaged its policy, Joe says it wouldn't matter.

"Now I'm never going there again. Maybe to another Boy Scouts, but not that one. They kicked me out when I was having so much fun, and they ruined it," he said.