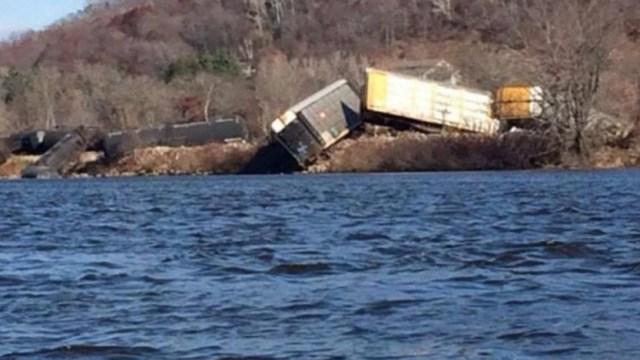 (WCCO) Wisconsin - A BNSF train derailed Saturday morning just north of the Wisconsin city of Alma, which is about 30 minutes southeast of Lake City.

Buffalo County Chief Detective Colin Severson says the train was heading southbound when multiple cars derailed at about 8:40 AM.

A BNSF Railway spokesperson 25 cars derailed, ten of which are empty auto carriers, near Highway 35 at County Road I.

Several of the other cars are tankers carrying denatured alcohol, five of which have tipped into the Mississippi River and are leaking from vents atop the cars.

BNSF says their personnel are working with the EPA and state agencies to address the leaks and contain the product. Authorities say the chemical will vaporize on its own unlike oil, but they will still work to understand what impacts the accident will have on the environment or the community.

There are no reports of injuries, fire or smoke, and Severson says there is no immediate risk to the public.

“Everybody responded very well, quickly, and as good as it can be,” Severson said.

A voluntary evacuation — which was discontinued mid-afternoon — was put into place, with the city’s American Legion serving as the gathering site. A command center is set up at Alma’s elementary school.

Businesses in downtown Alma are able to stay open despite the derailment.

Alma’s police and fire departments are assisting, along with Wisconsin’s state patrol and fish and wildlife agency.