This Comet will Zoom by Earth on New Year's Eve 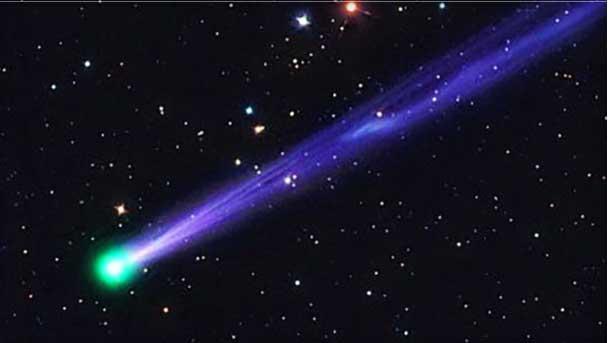 (CBS NEWS) A comet streaking across the night sky on New Year’s Eve will help welcome in 2017. The comet — called Comet 45P/Honda-Mrkos-Pajdušáková — only comes around about every five years. It won’t be visible to the naked eye for skywatchers looking up at the stars on Saturday night, but it can be seen with the help of strong binoculars or a telescope if you know where to look.

Comet 45P has already been in our cosmic neighborhood this month — it appeared low on the western horizon on Dec. 15 and again made an appearance on the 21st. On New Year’s Eve, it will pass by the crescent moon as we say goodbye to 2016, according to NASA.

The best chance to catch a glimpse is to look through a telescope towards the west just after sunset on Dec. 31.

The astronomy site EarthSky.org notes that while the comet is passing relatively close to Earth in cosmic terms, it’s still a very safe distance away — more than 7 million miles away, or about 30 times the distance from here to the moon.

Comet 45P is what’s known as a “periodic” comet, which is a “previously identified comet that’s on a return visit,” NASA stated. It makes a return visit to the inner solar system every 5.25 years, so expect to see it again in about half a decade.

This comet’s New Year’s party isn’t the only celestial event happening in the sky that night. Mars and Neptune will also appear very close to one another, with the planets’ red and blue-green hues offering a seasonally appropriate color contrast as the year comes to a close.