"They Pushed me into the Snow"; 72-year-old Milwaukee Man Recovers Car Stolen by Teens 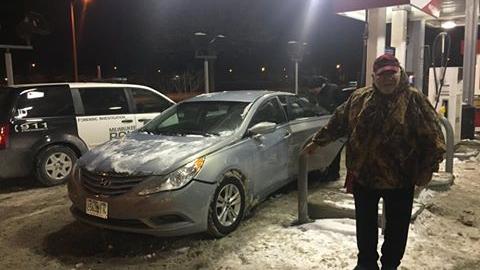 Milwaukee Police have arrested two teens wanted for assaulting a 72-year-old man and stealing his car.

It also started Saturday morning, while Luis Belmondes was clearing snow off his car outside his Walker's Point home. He says a group of teens pulled up in a pickup truck, and one of them hopped out.

"He pushed me, and I fell on my side, and by the time I get up, he's already in the car, taking off."

Belmondes has two bad knees, but was able to get up on his own to call police.

"It was so fast. You get angry, you get upset."

Two days later, his son George was walking up to the house, when he saw his dad's car round the corner.

"They took a left and I just stared at the vehicle," he says. "They were coming back to the crime scene."

Belmondes believes they were coming back to try and take his second vehicle, a white truck.

"I think they were looking for the truck, or to get into the house, because they had the keys," he says.

Once again, the suspects got away, but by that point, the Hyundai's Bluelink navigation system had been turned on.

Police found the car at 35th and Burnham, where the suspects had stopped to get gas.

Belmondes says the tank was full when they took the car, meaning they drove over 300 miles in less than two days.

Belmondes says they did substantial damage to the car, which will cost him $500 to repair. He's also had to pay to change the locks on his doors. Despite the incident, he's not worried about the third suspect coming back.

"I'm not afraid, I'm too old to get scared. If something happens, it's gonna happen."