The secret criminal history of the Children's Hospital gunman 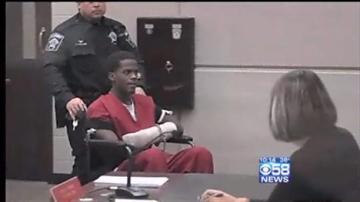 MILWAUKEE-Sheriff David Clarke tells CBS 58 News that the Children's Hospital gunman has a serious offense on his juvenile record, not just drug offenses and a weapons offense as an adult.

\"This guy was engaged in felonious behavior as a juvenile. It wasn't just marijuana,\" Sheriff Clarke said, \"I happen to know what it is and it was a very serious offense which would you get 30 years as an adult.\"

Clarke says this shows a pattern of behavior that should have given the judge pause when releasing Hendricks on bail pending sentencing for firearms possession.

When Milwaukee Police found out Hendricks was the hospital they went to bring him into custody.

Instead officers say he pulled a gun and they wounded him.

Sheriff Clarke says it makes no sense to assume Hendricks would magically change as an adult given his juvenile criminal history.

\"There are going to be some cases that these things happen. Fortunately nobody was killed and the police department were able to handle it. If the judge had known this was going to happen he wouldn't have released him on bail. But there's no way to know that. You don't have a crystal ball.\"

Even if Hendricks posts bail on the new charges from the hospital incident, he's been remanded into custody for failing to appear in court on the prior case.