The Miracle on 27th Street in Milwaukee 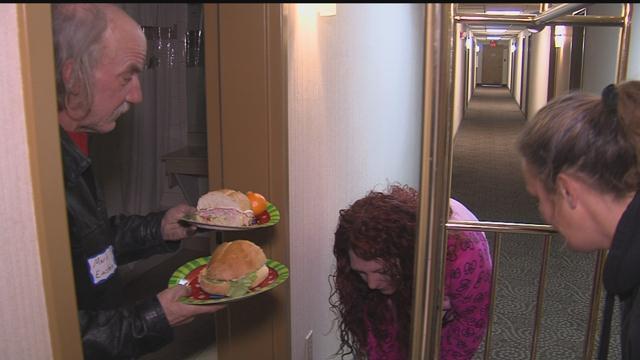 Extra food arrived on Christmas Eve at the Rodeway Inn on 27th Street on Milwaukee's south side.

Wauwatosa resident Tammy Jo Scholler and her daughter Madison learned of the homeless people who were staying overnight at the hotel  and wanted to pitch in by making sure they had plenty to eat.

"I actually woke up this morning, honestly, and figured I'd do something good today with my daughter since I don't have a lot of Christmas presents for her," explained Scholler. "I figured we could do something and help somebody out. I get excited at stuff like this."

The stuff she's referring to is the Adopt a Homeless Person Event organized by "Angels Among Us" a grassroots group that delivers meals to the homeless where that may be.

The founder who has overcome her own struggles wanted to do something different.

Kristy Lynn was a special guest on the CBS 58 News at 4 in the first week of December asking the public for help to pay for one night's stay at a hotel.

One of the people who received the hotel is a woman named Roxanne. When asked about what it was like to sleep in a real bed she replied, "It was beautiful. It's a blessing."

"Angels Among Us" gathered enough money for hotel rooms for some 40 people, plus an elaborate holiday party with food, entertainment and presents.

The donors were also part of the celebration so they could meet the person they were helping..

"The underlying meaning was to show the world that these are human beings," explained Kristy Lynn. "To get ride of the stereotype of what a homeless person looks like. We did succeed because somebody came up to me and said I can't tell who's homeless and who isn't."

CBS 58 News was the only station trusted to take part in the event and allowed to photograph the participants with their consent.

After the CBS 58 News at 9 on "The M" on Wednesday something magical happened.

A viewer named Donald showed up at the hotel and paid for ten more hotel rooms.

That meant many, like Roxanne, would get to spend a second night at the hotel.

""Thank you so much,"  said Roxanne enjoying the comfort of a full bed with the television on.

Her message to Donald was simple: It's a beautiful blessing and I pray that God Blesses you the same way."

The Thomas family from Milwaukee also showed up with stacks of hot pizzas and Kristy Lynn says a viewer from Oconomowoc was going to stop by to personally deliver a check so that these angels will have wings in the new year.