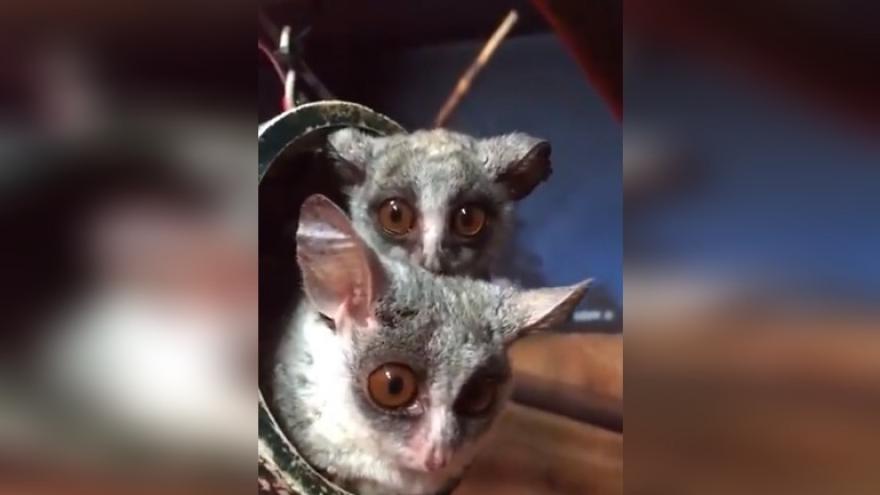 The new babies include a bushbaby and a prehensile tailed porcupine in the Small Mammals building, and a Japanese macaque born on Monkey Island.

The bushbaby, also known as a mohol galago, was born on April 4. Officials say the South African bushbaby is a species of primate, born to mother Kirby and dad Keanu. This is the pair's second offspring. The first baby was born in November, a girl named Grogu.

Officials say Kirby is taking good care of the baby. Zoo keepers say the baby follows sister Grogu around the habitat, and  Grogu follows the new baby around. Officials say the baby's gender is yet to be determined.

The baby's most recent milestone was taking a bug to eat from a keeper's hand, officials say.

In order to record the baby's weight, keepers are training the baby to place a bug on a scale and encouraging it to hop on.

A prehensile tailed porcupine was born on May 11 to mom Quinn, and dad Seamus, which is the first birth for the pair. Officials say they believe the baby is a female and have named her Bristle.

Officials say keepers occasionally believe the baby nursing, but she didn't for an adequate amount of time and was taken off exhibit for hand-raising. Officials say hand-raising involves keeping her in an incubator when the parents were asleep and feeding her formula. Officials say Bristle was with her parents during the day.

Keepers say Bristle appears very healthy, walks around the habitat, and even climbed a tree in her habitat at one day old! Officials say Bristle enjoys belly rubs and is noted to be very "Spunky, sassy and animated."

Bristle is also noted to be active and able to climb every level of the exhibit. In the wild, prehensile porcupines are excellent climbers and spend most of their time in trees.

On Monkey Island, a male Japanese macaque was born to mom Negai and dad Kota. The baby is named Kumo, which is Japanese for "cloud." Kumo is his mother's third offspring.

Officials say Negai is a very protective mother and is nursing the baby. Kumo has begun venturing away from Nagai from time to time.