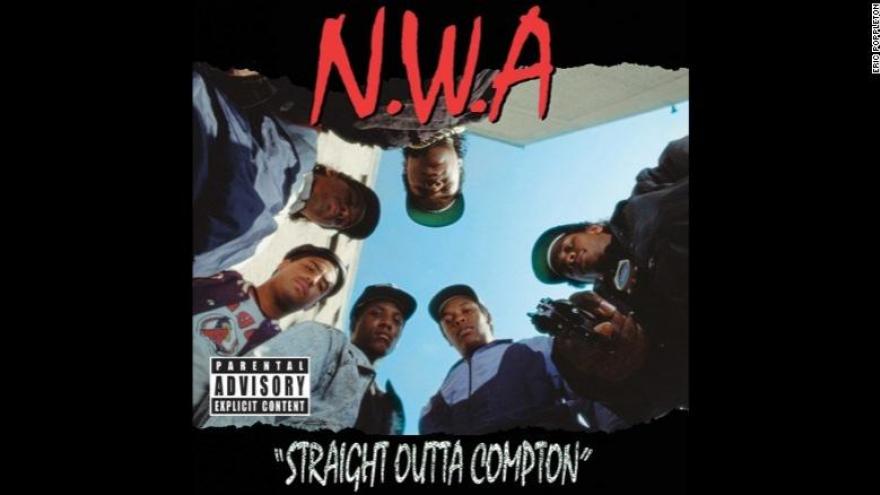 (CNN) -- The photograph is considered one of the most provocative to ever grace an album cover: six guys staring toward the ground, one pointing a handgun.

It was the cover art for "Straight Outta Compton," the pioneering debut album by N.W.A. that revolutionized gangsta rap and redefined hip hop.

He and his art director, Kevin Hosmann, followed the members of N.W.A. around alleys in Los Angeles. There was no entourage. That was long before the members became household names: Eric "Eazy-E" Wright, Andre "Dr. Dre" Young, O'Shea "Ice Cube" Jackson, Lorenzo "MC Ren" Patterson and Antoine "DJ Yella" Carraby. A movie about the rap group's rise hits theaters Friday.

"Dr. Dre was spinning records in his garage, and now he's a billionaire," Poppleton says.

Of that particular day, he says, "We were just making photographs, ripping locations."

At one point, they strolled down an alley. Poppleton hopped on the ground.

"We were just trying stuff. It wasn't lit. It was raw, just like those guys," he says. "Photographically, I just laid on the ground and looked up and all these guys stood over me with a gun."

"We were making stuff up. It wasn't a big deal to us at the time."

He had no idea the photograph would become an iconic symbol of gangsta rap. It was named the best gangsta rap album cover of all time in 2008 and Digital Arts once listed it as one of the 25 best album covers ever.

Why did that image stand the test of time?

"In hindsight, it was just so provocative. You're taking the perspective of someone who is about to be killed essentially. Not that they were going to do that to me," Poppleton says. "We don't even print that stuff in newspapers. Even at CNN, would you print an image like that?

"So how could we even propose this as an album cover?"

Still, he described the double-platinum album as a perfect blend of music and photography.

Here you had this controversial new group that "inspired a generation of listeners to a new level," Poppleton says. "Equally important in this case is the original album artwork. The 'Straight Outta Compton' album cover art summed up the album's lyrics at the time. I'm not sure this type of imagery would be so widely accepted or presented in today's commercial marketplace.

"Back then, it was more free rein."

Poppleton earned less than $2,000 for the shoot, enough to cover rent back in the day.

He would go on to shoot four other N.W.A. album covers. He has since traveled the world documenting people and landscapes through his photography. He was in Nepal earlier this year when the earthquake struck. CNN documented his journey to bring home the body of his best friend killed at Everest Base Camp.

An advocate for peace, Poppleton has mixed feelings about being the man behind the N.W.A. image.

"Starting a whole movement with an image like that," he says, "is so opposite of me. But it was the time, so I did it."