'The gun didn't kill my boy. I did': Father Grieves Son He Accidentally Shot 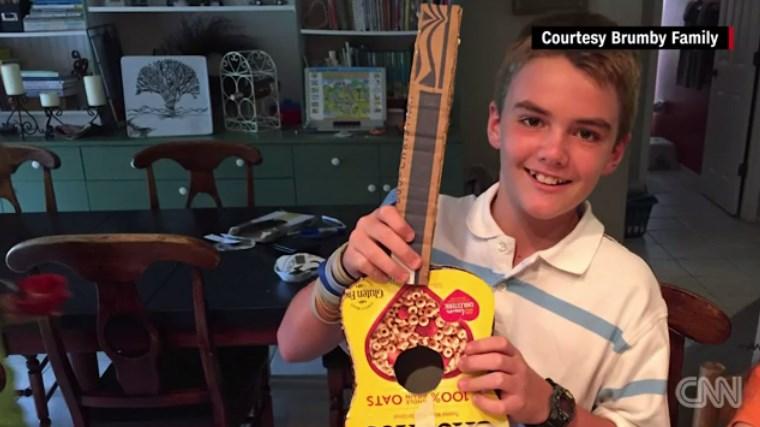 (CNN) Stephen Brumby had a long list of hobbies and interests, and at 14 years old, he was starting to catch up to his father and older siblings.

He loved tennis, bass fishing and playing worship piano at church, a talent he inherited from his grandmother, his father said.

He also enjoyed shooting, a skill he learned from his father, William Clayton Brumby. Target practice was one of those things Stephen was poised to surpass his father on at the gun range.

Because their parents keep guns in the home for self-defense, each of the seven Brumby children learned gun safety at an appropriate age, Clayton Brumby said.

"We wanted our kids to be aware of guns," he said. "I wanted them to be comfortable around them and understand them."

None of those lessons made a difference on Sunday, when Clayton Brumby accidentally shot Stephen to death at a Sarasota, Florida, gun range.

'Every round in the gun is your responsibility'

Clayton Brumby, 64, pulled the trigger while trying to fish a hot shell casing out of the back of his shirt, according to the Sarasota County Sheriff's Office. The investigation continues, but at the moment there are no charges pending against the father, the department said in a statement Monday.

Father shoots son, mistaking him for an intruder

Clayton Brumby does not dispute the department's account and accepts responsibility for his son's death. He hopes the incident serves as a reminder to parents to be vigilant in anything they do with their children, bearing in mind that anything can happen despite anyone's best intentions and preparation.

"Every round in the gun is your responsibility. When it fires you need to stand to account for it it. That's what I've spent the last two days doing, accounting for my operating error."

Death and guns in the USA: The story in six graphs

'I made a mistake'

Clayton Brumby brought Stephen, his 24-year-old son and his 12-year-old daughter to High Noon Gun Range for target shooting, just as he did once or twice a month.

After Clayton Brumby fired a round at a target the bullet casing was ejected from the handgun.

The casing bounced off the wall and fell into the back of his shirt, the sheriff's office said.

In an attempt to remove the casing , the elder Brumby reached behind his back with the hand that was holding the gun. While doing so, he inadvertently pulled the trigger, the department said.

Before the play date, the gun talk

The father said the round hit the ceiling and came down on his son.

"It was a very freak accident. I made a mistake," he said.

Stephen was as sweet and gregarious as they come, always willing to help his mother clean the house, fix the television or log on to email.

To his youngest sister with spina bifida, he was her caregiver and best friend, his father said.

Stephen's family has set up an online fundraiser for funeral and other expenses.

As he entered his teen years, Stephen was beginning to take an interest in family conversations around the dinner table about life's bigger questions, his father said.

His family had high hopes for him. After finishing homeschooling with his mother, his parents hoped he would follow his older siblings to college.

What would he have done? Clayton Brumby is not sure. At 14, Stephen was just beginning to focus his interests.

But his father is confident he would have been successful, no matter what he did.

"He had a heart that was bigger than he was," Clayton Brumby said. "He was always thinking outside the box."

The incident has not changed his views of guns, he said. He still intends to keep them in the home and use them for self-defense of his home and family.

"I can't fix this. It's just a great loss but thankfully we'll see him someday. I have a feeling he's on a great lake out there."