Texas Teen who Made Clock Transfers 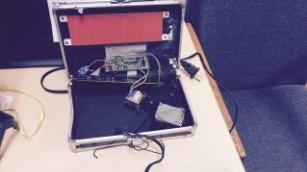 (CNN)The week started pretty terribly for Texas high school student Ahmed Mohamed. On Monday, the teen, who is Muslim, brought to school a clock that he was proud to have made on his own and was arrested for what police initially -- and falsely -- said was a hoax bomb.

But by mid-week, his face and name were splashed across traditional and social media, and he'd received thousands of tweets and Facebook posts of encouragement.President Barack Obama invited him to the White House and praised his love of science. Leaders at Reddit and Twitter offered him internships. Google executives said they were reserving Ahmed a spot at their weekend science fair and MIT asked him to visit the campus.

Facebook creator Mark Zuckerberg invited him to visit the company's headquarters, posting, "Having the skill and ambition to build something cool should lead to applause, not arrest. The future belongs to people like Ahmed."

The hashtags #IStandWithAhmed and #EngineersForAhmed garnered hundreds of thousands of posts and tweets.

By Thursday, more details of the 14-year-old's arrest in Irving, Texas, came to light.

In an interview late Wednesday with MSNBC's Chris Hayes, Ahmed said he was pulled out of class at MacArthur High School by his principal and five police officers and taken to a room where he was questioned for about an hour and a half.

He said he asked the adults if he could call his parents.

Hayes asked what he meant.

In middle school, Ahmed said, he had been called "bombmaker" and a "terrorist."

"Just because of my race and my religion," he said, adding that when he walked into the room where he was questioned, an officer reclined in a chair and remarked, "That's who I thought it was."

"I took it to mean he was pointing at me for what I am, my race," the freshman explained.

Ahmed is not going back to MacArthur -- he's transferring to another school, his father Mohamed Elhassan Mohamed said. The family has not yet picked a new school for Ahmed, he said, and is exploring options inside and outside of the country.

Mohamed, who immigrated to the United States from Sudan, believes that his son was targeted because of his brown skin color and his religion.

The teen has never been in trouble, Mohamed told CNN. "My son's name is Mohamed -- people just think Muslims are terrorists but we are peaceful, we are not that way," he said.

He was furious that the school didn't contact him right away to tell him his son had been arrested. Instead, he first learned of what happened when police called him.

Mohamed said he rushed to the station and saw his son "surrounded by five police and he was handcuffed."

Mohamed said his son was at first embarrassed by what happened, but then was lifted and emboldened by the widespread support he has received.

"I was scared at the moment, but now I feel really happy," he said. "I'm getting all this support from all over the world. And the support isn't just for me but for everyone who has been through this. I will fight for you if you can't stand up for yourself."

He said he was most excited to hear from MIT. "I dream of going there," he said.

And he's thrilled to go to the White House.

"I hope to see him soon," Ahmed said of Obama.

Irving police had held onto the clock as evidence, but on Thursday, they told CNN that it's ready for Ahmed to pick it up.

Asked what his plans for the future are, he told GMA, "That clock was part of my future."

"I do not fault the school or the police for looking into what they saw as a potential threat," she said in a statement. They all followed procedures, she said.

Van Duyne has had controversial interactions with Irving's Muslim community, most notably when she supported a resolution that would prohibit "foreign law," including Islamic or sharia law, CNN affiliate KTVT reported.

Ahmed has said he brought the device to school to impress his teachers, but one became concerned about the device and reported him to the principal.

Irving Police Chief Larry Boyd said authorities were able to determine quickly that it wasn't a bomb, but they investigated Ahmed to determine whether he brought the device to school with the intention of creating alarm. It is against Texas law to use or possess a fake bomb with the intent to make someone believe that it is an explosive.

Ahmed told investigators it was a clock, but he was led away in handcuffs after he wouldn't say much more on the matter, Boyd said. Further investigation revealed details -- such as his making the clock to impress teachers -- that led police to decide not to pursue charges, Boyd said.

Boyd told CNN's "New Day" on Friday that his officers "made the best decision they thought that they could make at that time, based on the information that they had."

"Of course we will review this," Boyd said. "Of course we want to go back and look at this and all the decision points and all the alternatives and make sure we give our officers the best guidance we possibly can, because this won't be the last controversial decision that they have to make."

A spokeswoman for the Irving Independent School District said that the way the teen's experience has been described in media reports is "unbalanced."

She declined to explain why, citing the need to protect a student's privacy, but said more details would be revealed if the family gives written permission to discuss the incident.