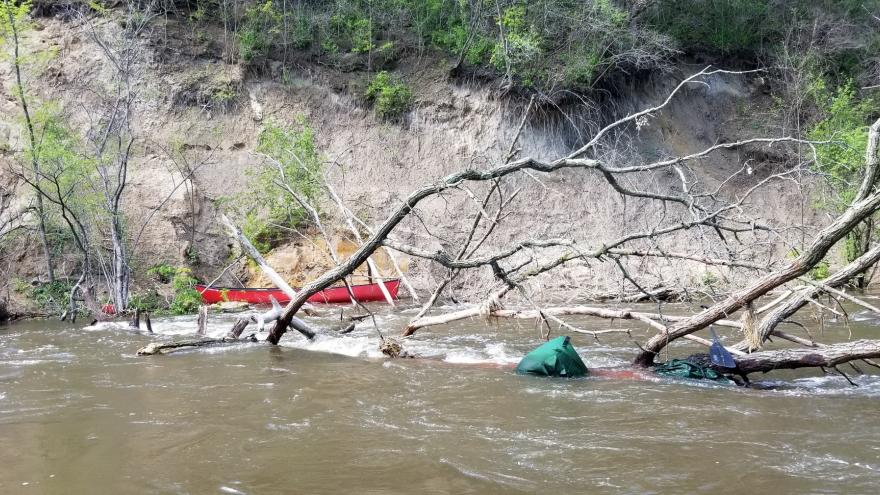 ROCK COUNTY, WI (CBS 58) -- A 14-year-old girl drowned while canoeing on the Yahara River in Murwin Park, northwest of Janesville, Saturday.   According to the Rock County Sheriff's Office four canoes had overturned in the river and a number of people were clinging to logs, yelling for help.

According to the Wisconsin State Patrol, Trooper Brandon Ferrell responded to the call 2:50 PM Saturday.  When he arrived at the scene he saw an up turned canoe and the young man calling for help.  The young man was trying to save his sister who was trapped under the water, pinned beneath  the capsized canoe and a submerged log.

Trooper Ferrell entered the water and swam to the canoe where he and the bother worked together to free the girl.   Once freed and on shore, lifesaving efforts began and the girl was transported to a local hospital.   She later died at the hospital.

As many as seven other members of  the canoeing party were rescued by boat and taken to the shore by members of the Sheriff's Office, Wisconsin DNR and Edgeton, Milton and Janesville Fire Departments.

The Rock County Sheriff's Office says at the time of the accident, the water in the Yahara River was running fast with a strong current.   The  Sheriff's Office is advising that the public not canoe, kayak, or partake in  other paddle sports on the Yahara River, Badfish Creek, Turtle Creek, and Sugar River  due to the high waters and extremely swift currents. Rock County Sheriff’s Office also recommends people participating in paddle sports wear a U.S. Coast Guard approved life vest or flotation device with a buckle or zipper that is the proper size for the intended wearer.