Teacher Suspended for Math Test about Drugs and Prostitution 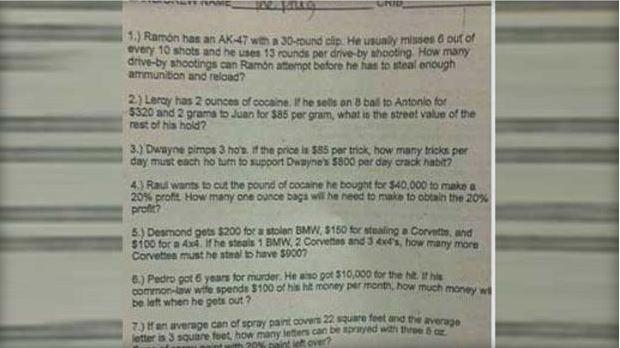 (CBSNews) MOBILE, Ala. -- A middle school in Alabama is investigating after a math test referencing drugs, prostitution and sex was allegedly given to students.

The Mobile County Public School System confirms to CBS affiliate WKRG that a teacher at Burns Middle School is on administrative leave after giving students the questionable math test.

The viral test has circulated the internet for years as "the L.A. Math Proficiency Test" and features word problems about pimps, cocaine, and gangs -- among other questionable topics.

One of the problems reads:

"Rufus is pimping for three girls. If the price is $65 for each trick, how many tricks will each girl have to turn so Rufus can pay for his $800-per-day crack habit?"

"Jarone want to cut his 1/2 pound of heroin to make 20% more profit. How many ounces of cut will he need?"

Superintendent Martha Peek said she couldn't comment on the details because it is a personnel issue but told WKRG as soon as they were made aware of the test, the teacher was suspended.