Tape of beating leads to charges against Philadelphia officers 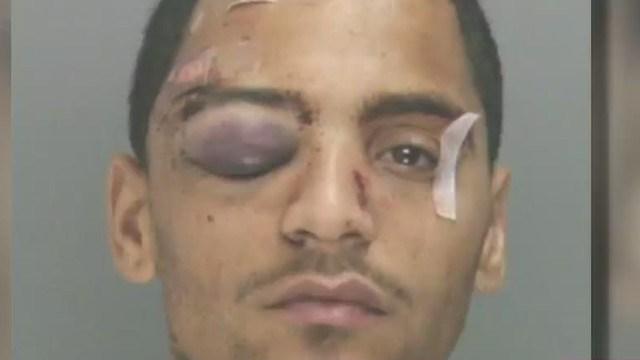 Police in a patrol car chase down a man on a scooter. The car stops, and two officers get out and beat the man with their fists and batons. His orbital bone fractures and he suffers lacerations on his head, yet he is the one who is charged with aggravated assault.

This week, the tables turned when a surveillance video from a nearby store led to charges of aggravated assault, criminal conspiracy and filing false reports against Philadelphia police officers Sean McKnight and Kevin Robinson in connection with the May 29, 2013, arrest of Najee Rivera.

\"I will prosecute these two officers to the fullest extent of the law. Simply put, no one -- not even police officers -- is above the law,\" said District Attorney Seth Williams.

Rivera's girlfriend tracked down the surveillance tape, according to CNN Affiliate WPVI, and it became key evidence in a grand jury investigation, in which Rivera testified that he got scared and drove away on his scooter after McKnight and Robinson pulled him over, stepped out of their car with batons extended and said, \"Come here!\"

What happened next was captured on the surveillance video and contradicts the original police report claim that Rivera grabbed Robinson and \"slammed him against a brick wall.\" It also accuses Rivera of \"throwing elbows during the struggle.\"

The grand jury found, however, that Rivera was wailing loudly and showed no aggressive actions as he was lying on the ground and being struck repeatedly by the officers.

\"The video undermined every aspect of the officer's account,\" said Williams.

Rivera, 23, was cleared of all charges and has been awarded a $200,000 settlement for pain and suffering.

Rivera is very satisfied with the charges against the officers, according to his lawyer, Leon Flynn, who spoke to CNN affiliate WPVI. \"How can I get beat up, but there were no consequences for the people who did this to me?\" was a question Rivera asked repeatedly, Flynn said.

Officers McKnight and Robinson have been suspended for 30 days with intent to be dismissed from the police force.

Robinson's attorney, Fortunato N. Perri Jr., said in a statement that his client \"has been a well-respected and dedicated member of the Philadelphia police department for the past seven years. He looks forward to clearing his name.\"

\"When suspects flee they create risks for themselves, for the public, and for the officers who bravely pursue them,\" he said.

The officers are not getting any sympathy from the police department, however.

\"It is painful, it is embarrassing,\" Chief Charles Ramsey told reporters this week. \"We have 6,500 sworn members. These guys do not represent the majority of police officers.\"