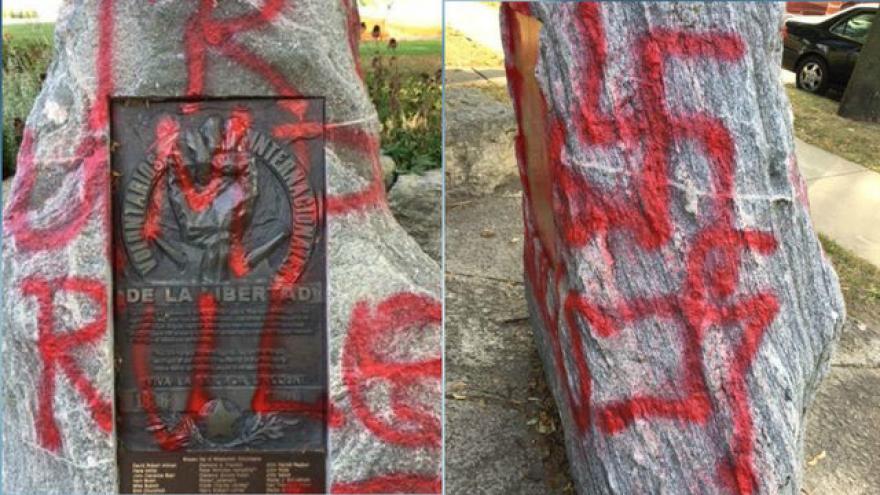 Officers responded to the Voluntarios Internacionales de la Libertad marker in James Madison Park, according to a release. A passerby noticed the red spray paint around 8:30 a.m.

The words “Trump rules” and “Antifa sucks” and swastikas were found on the marker, police said.

Madison Mayor Paul Soglin said, “Given the enabling rhetoric from Donald Trump, particularly since Charlottesville, we know that vicious racist and Nazi attacks have increased. While we know that over 99 percent of the people of Madison abhor and reject this terrible act, let it stand as a reminder that there are always a few ignorant people who would destroy our liberty and rights."

Soglin is asking the people responsible for the graffiti to come forward to explain themselves.

"True patriots never hide and attack in the darkness; striking in silence and in the shadows lies in the heart of cowards and fools," Soglin said.

City of Madison Parks crews are cleaning the memorial, which is dedicated to international volunteers who fought in the Spanish Civil War in the 1930s, many of whom came from Wisconsin, officials said.

The graffiti was reported Wednesday, the same day the Jewish holiday Rosh Hashanah starts at sundown.

"Madison Parks is disappointed and frustrated by the recent vandalism of the International Brigades monument in James Madison Park near the Gates of Heaven," the statement said. "Parks staff were made aware of this vandalism this morning around 8 a.m. and removed the offensive graffiti by approximately 10:15 a.m.  The work was completed by our talented staff who have professional experience in safely removing graffiti from monuments in a manner that does not damage the base materials."