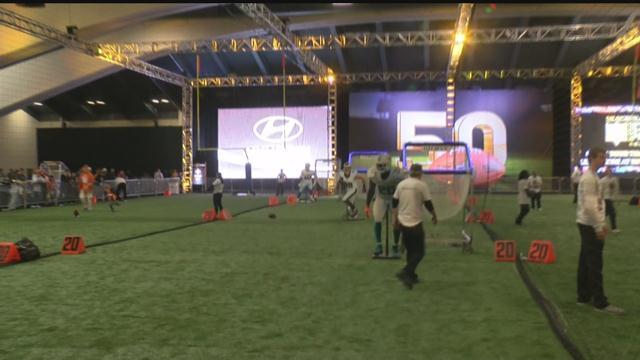 In downtown San Francisco, the green and gold is represented. In fact, when you take away the Super Bowl teams and teams located in the Bay Area, the Packers are probably the most worn team right now in the Bay Area.

The Pack has fans like Raymond Houle who have never been to Wisconsin. He credits, "Brett Favre just running around being a kid," as the reason for his love.

In the NFL Experience inside the Moscone Center, Packers running back Eddie Lacy signed autographs and met with fans, "it's definitely a cool experience to interact with the kids and play games," said Lacy.

There's fun stuff in the NFL Experience as far as the eye can see. Bill Walsh met Neville Richardson standing in line for a football drill who told him that Brett Favre was his favorite player. And just after chatting, Richardson got to catch a pass from Kansas City Chiefs player Eric Berry. What a great place to feel like a kid!

Fans could get their Aaron Rodgers on at a game called Hail Mary (Rodgers completed two at the end of the season.)

"The way he throws the ball so high, the craziest thing I've ever seen in my life" said one fan.

It turns out, the also let Vikings fans into the NFL Experience. CBS 58's Bill Walsh brought up the missed field goal in the playoffs to one fan and then tried it for himself. The result was not much better; and in case you are wondering the two Walsh's are not related.