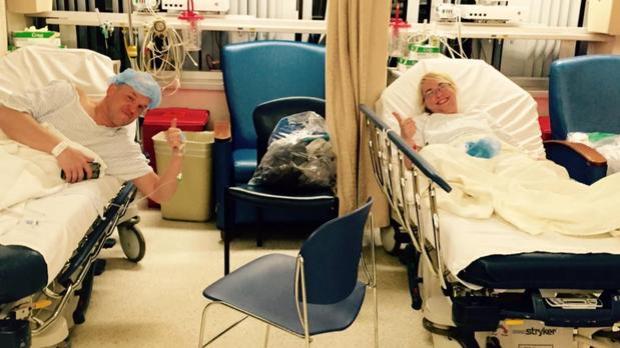 (CBSNews) FRANKFORT, Ill. -- There are always a lot of people to thank on a wedding day, but the bride-to-be at a church outside Chicago had one person to thank over all others: a total stranger who made it possible.

Several years ago, out of the blue, 27-year-old Heather Krueger was diagnosed with stage 4 liver disease. Doctors said she had just a few months to live.

“They immediately told me I was going to need a transplant,” Heather said. There was not much time to find a donor.

“By that time I could really feel my body shutting down,” she said.

Enter our hero. Chris Dempsey is a code enforcement officer for the village of Frankfort, Illinois. He said he was in the break room one day when he overheard a guy talking about this woman who needed a liver donor.

“I spent four years in the Marine Corps and learned there never to run away from anything. So I just said to myself, ‘Hey, if I can help, I’m going to help,’” Chris said.

Keep in mind he had never met Heather, but got tested to see if he was compatible. And when he found out he was, they finally met for the first time.

“We had lunch together, discussed what the whole process was going to be,” Heather said. He even treated her meal!

Not long after, they checked into the University of Illinois Hospital. The transplant -- which involved removing about half of the donor’s liver -- went off without a hitch.

Afterward, Chris and Heather remained close. They got so close, in fact, that he was at her wedding last weekend.

He had to be, really. Because what is a wedding without a groom?

And so it was, that year-and-a-half after giving her part of his liver, she gave him all her heart.

“You are the most incredible man I have ever known. You believe in me and you make me feel amazing every single day. Because of you, I laugh, smile and I dare to dream again,” Heather read in her vows.

Acts of great kindness are done without expectation. When Chris decided to give an organ to random stranger, he had no idea he was saving his own wife. But such is the way goodness.