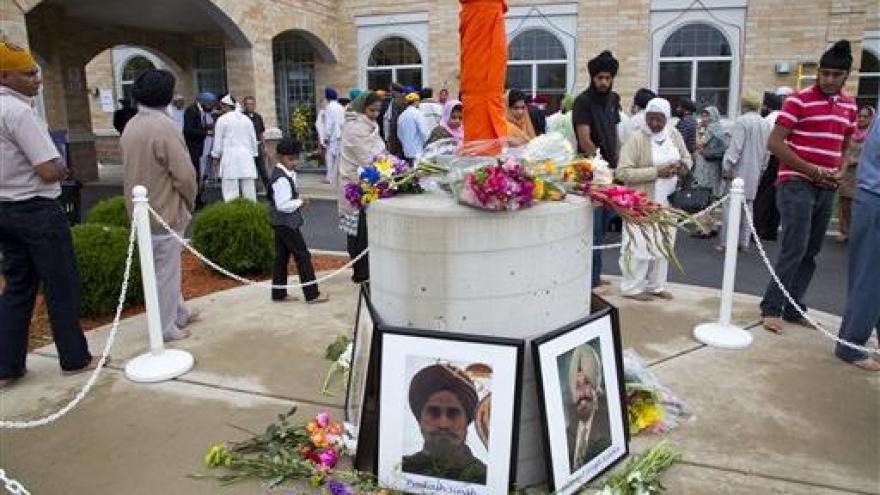 (AP) — In the five years since a white supremacist fatally shot six worshippers at a Milwaukee-area Sikh temple, those affected by the tragedy have remained united by a mission to combat hatred.

A former skinhead and the son of a man killed in the massacre hold school assemblies to preach a message of peace.

Another man whose mother was killed lobbied the federal government to start tracking hate crimes against Sikhs. And a police officer who was shot 15 times when he confronted the gunman on Aug. 5, 2012, has remained close with the Sikh community and brought up the tragedy during a Republican presidential town hall last year.

These are their stories.

The unlikely friendship of Pardeep Kaleka and Arno Michaelis is linked by a date they each have tattooed on the palm of their hands: 8.5.12.

Kaleka’s father, Satwant Singh Kaleka, 65, founded the Sikh Temple of Wisconsin in Oak Creek and was among the worshippers killed. Michaelis founded a gang of skinheads and sang in a hate-metal band, but years before the shootings he renounced the racist movement he helped build. Still, he felt responsible for helping create the hateful environment he said may have influenced the killer, Wade Michael Page.

“When I first met Pardeep, I was destroyed,” he said, referring to the guilt he felt.

Michaelis, 46, invited Kaleka to dinner six weeks after the shootings and together they created a group called Serve2Unite, which promotes a message of love in the face of hate. Each year, they speak at about 25 school assemblies to tell their stories.

“For both of us, and obviously for me losing my father, we saw it as our personal responsibility to commit ourselves to action,” said Kaleka, 40.

At the time of the shootings, the FBI’s tracking of hate crimes did not list a category for violence against Sikhs. Instead, they were included among “other religions.”

Harpreet Singh Saini lost his 41-year-old mother, Paramjit Kaur Saini, in the temple attack and a month later he urged a U.S. Senate Judiciary subcommittee to recognize Sikhs when they are the targets of hate.

“My mother and those shot that day will not even count on a federal form,” Saini told lawmakers. “We cannot solve a problem we refuse to recognize.”

In addition to Saini’s mother and Kaleka’s father, those killed in the attack were Prakash Singh, 39; Sita Singh, 41; Ranjit Singh, 49; and Suveg Singh, 84. Four others were injured, including Punjab Singh, a Sikh priest who remains in a coma five years later.

The FBI began tracking hate crimes against Sikhs in 2015.

“THEY CONTINUE TO BE A PART OF MY LIFE”

In March 2016, the first officer who responded to the temple shootings asked then-candidate Donald Trump during a GOP town hall what he planned to do to protect Sikhs and Muslims who are blamed and targeted after terrorist attacks.

“One of the quickest knee-jerk reactions is the backlash against specific minority religious groups. This in turn brings about things that cause damage all over,” the former Oak Creek Police Lt. Brian Murphy said to Trump.

Murphy later told WISN-TV he thought Trump avoided his question because his answer mostly focused on saying the U.S. needs to recognize the threat that “radical Islam” poses.

Like Murphy, former Oak Creek Mayor Steve Scaffidi remains close with the town’s Sikh residents, who he said were “compassionate in the face of this unspeakable tragedy.”

Murphy and Scaffidi will participate in an annual 6K run Saturday in Oak Creek to remember the shooting victims and raise money for six scholarships — one in the name of each of the people killed.

“They continue to be part of my life,” Scaffidi said.