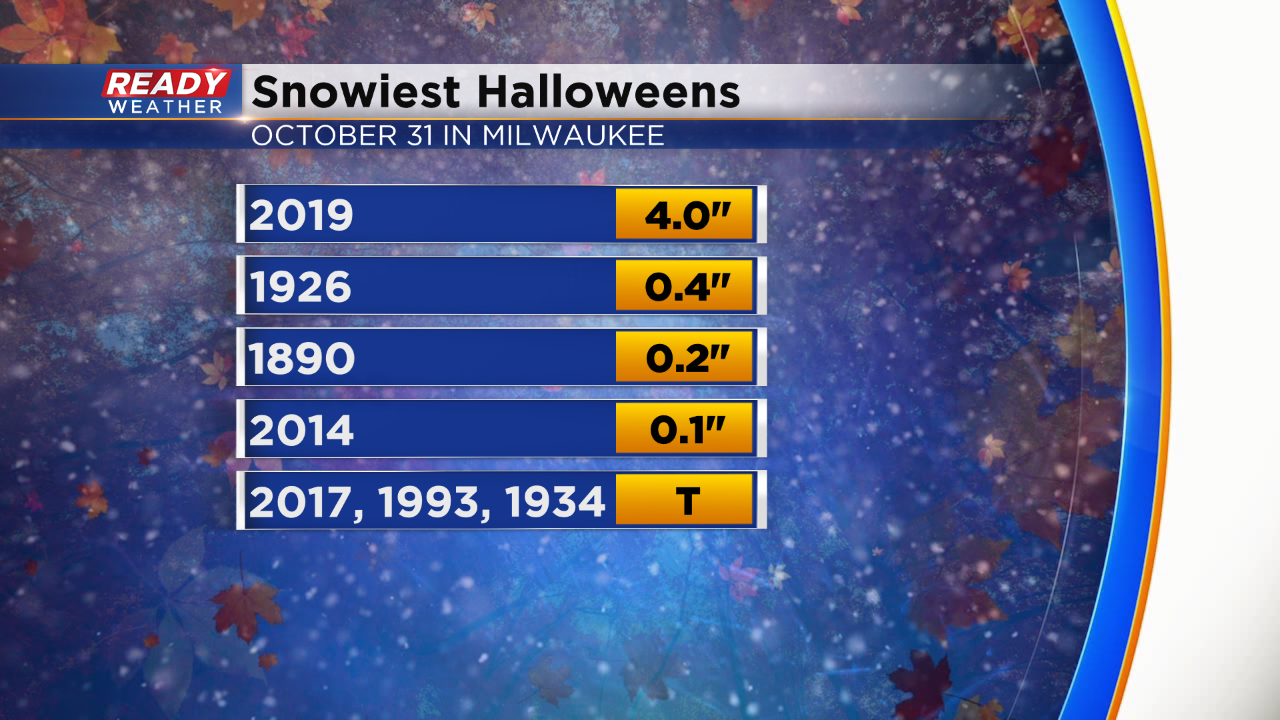 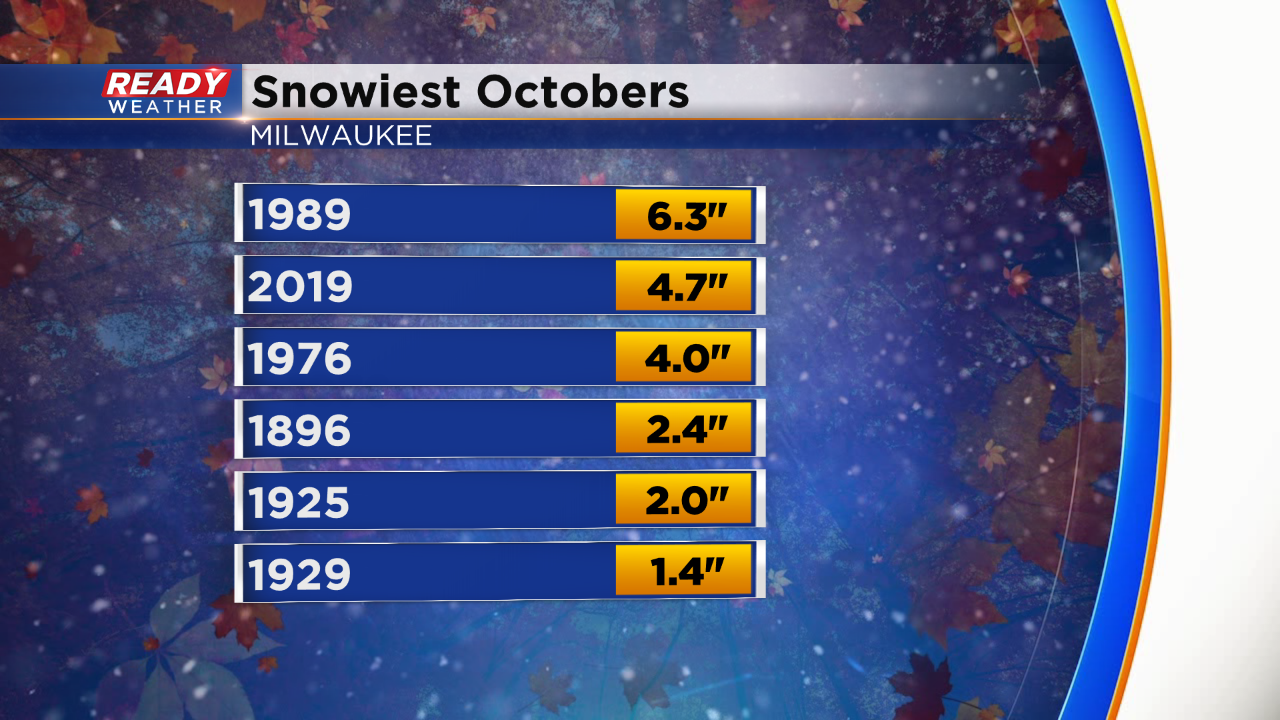 Today's daily snowfall broke a record for Milwaukee.  Milwaukee smoked the old record of 0.4" back in 1926.  Milwaukee's monthly snow total will go down as 4.7".  That will be the second snowiest behind 1989.  A big storm dumped 6.3" over two days of that year. 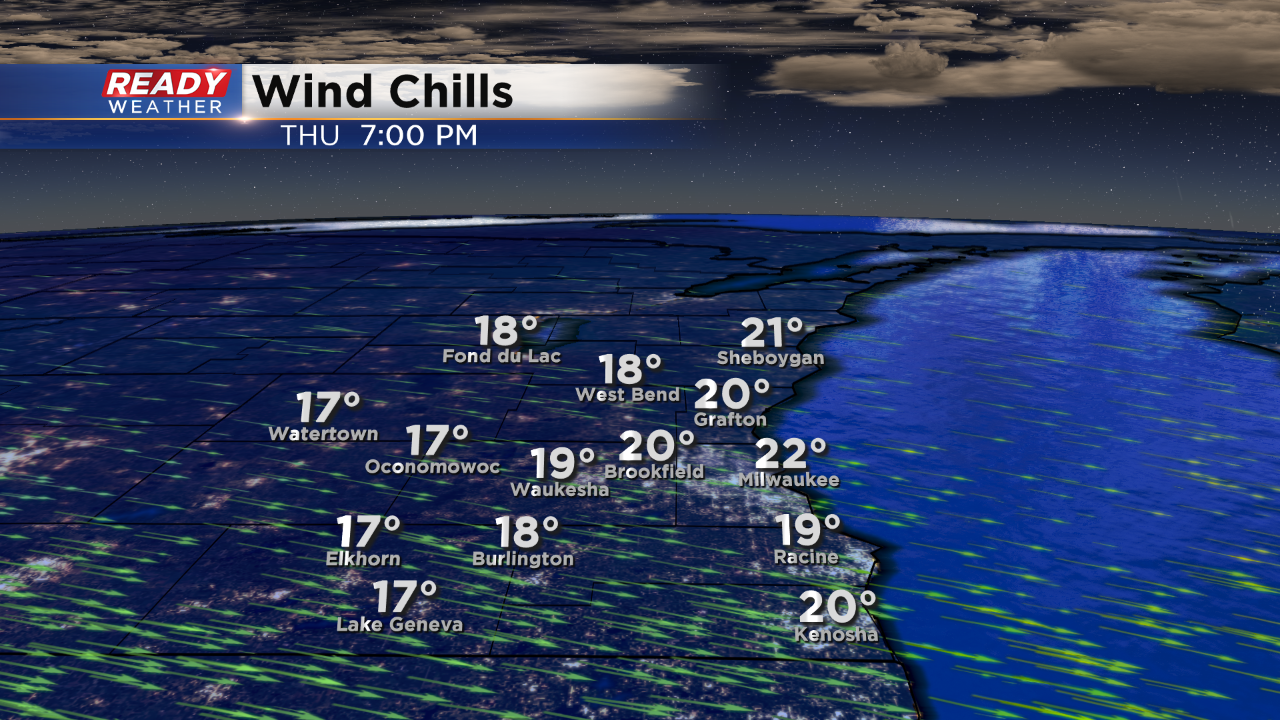 Other than some flurries, the early evening will be done with the accumulating snow.  Some flurries are possible.  Wind chills will be in the teens and 20s for the Trick or Treaters.  Watch out for slushy sidewalks and side streets. 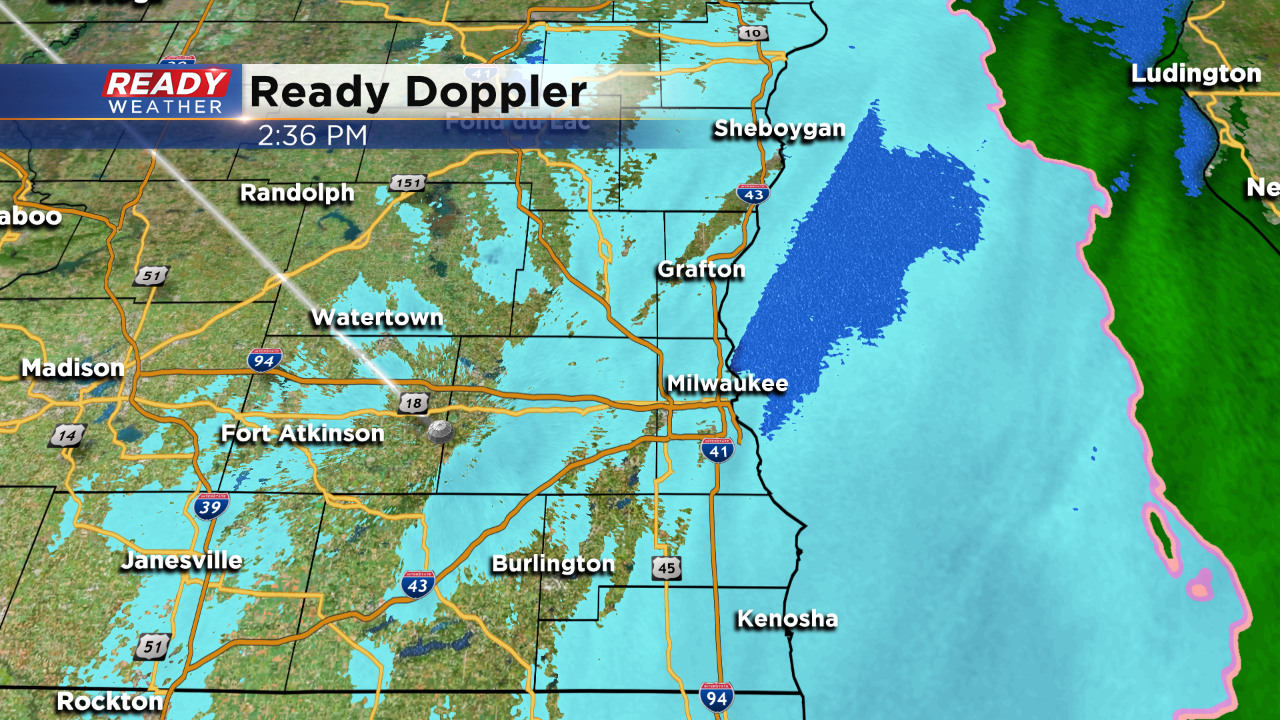 The back edge of the snow is starting to break up.  We should see a decrease in the snow showers through 4 pm.  Other than some lingering flurries the measurable snow will be done.

Slushy roads are still an issues, along with sidewalks.  Wind chills this evening will fall into the 20s. 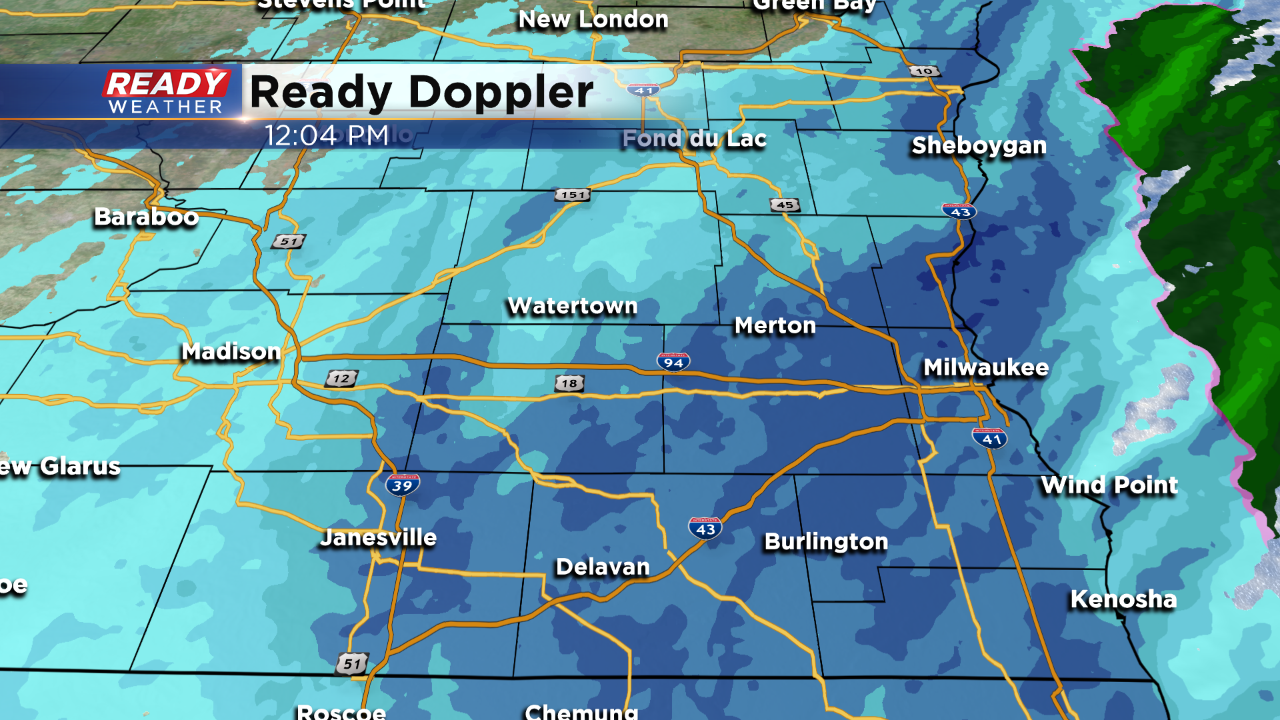 This continues to stream in from the southwest and if you notice, the darker shades cover most of the area. That means an additional couple of inches of snowfall accumulation is likely. That's on top of the already solid totals so far. Check it out: 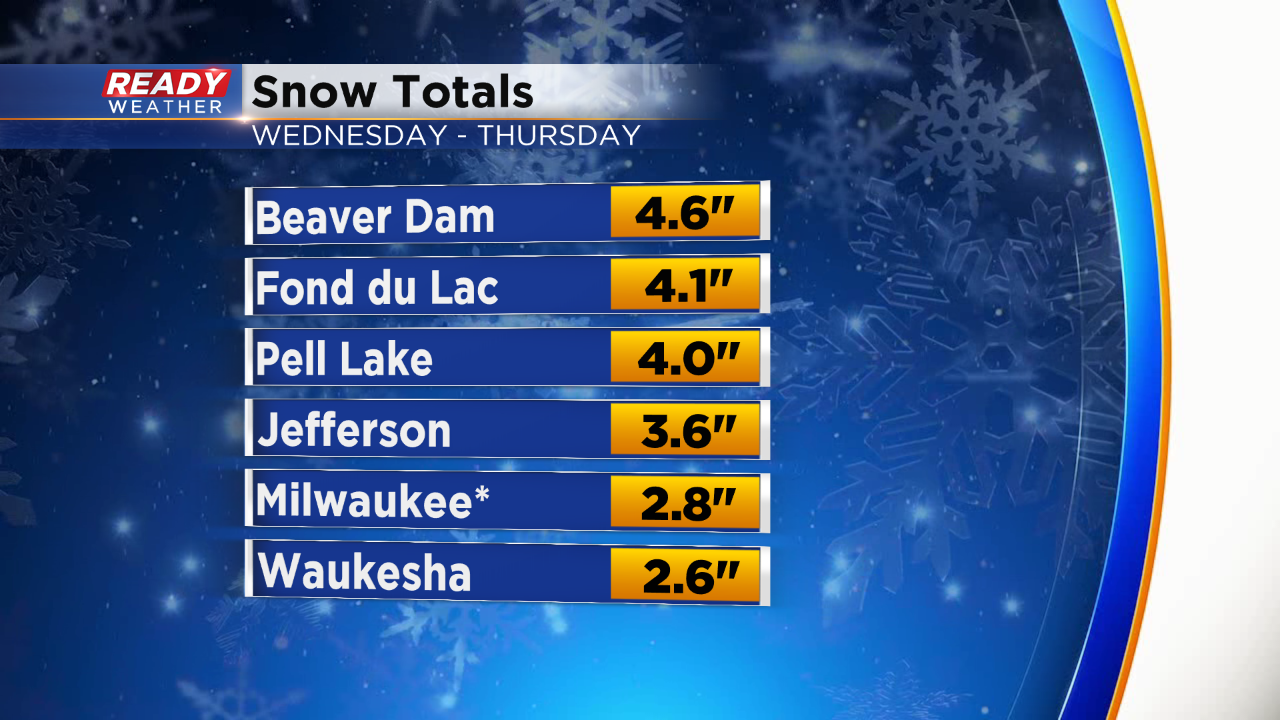 Milwaukee has already smashed its' previous October 31st snowfall record which sat at 0.4" going back to 1926. The snow will continue to fall until around the evening commute. The wind will also be an issue. It's providing wind chills in the 20s, and will only slightly ease this evening to around 10-15mph from the northwest. Please bundle up the kiddos before you send them out trick-or-treating later today, it will be frightfully chilly! 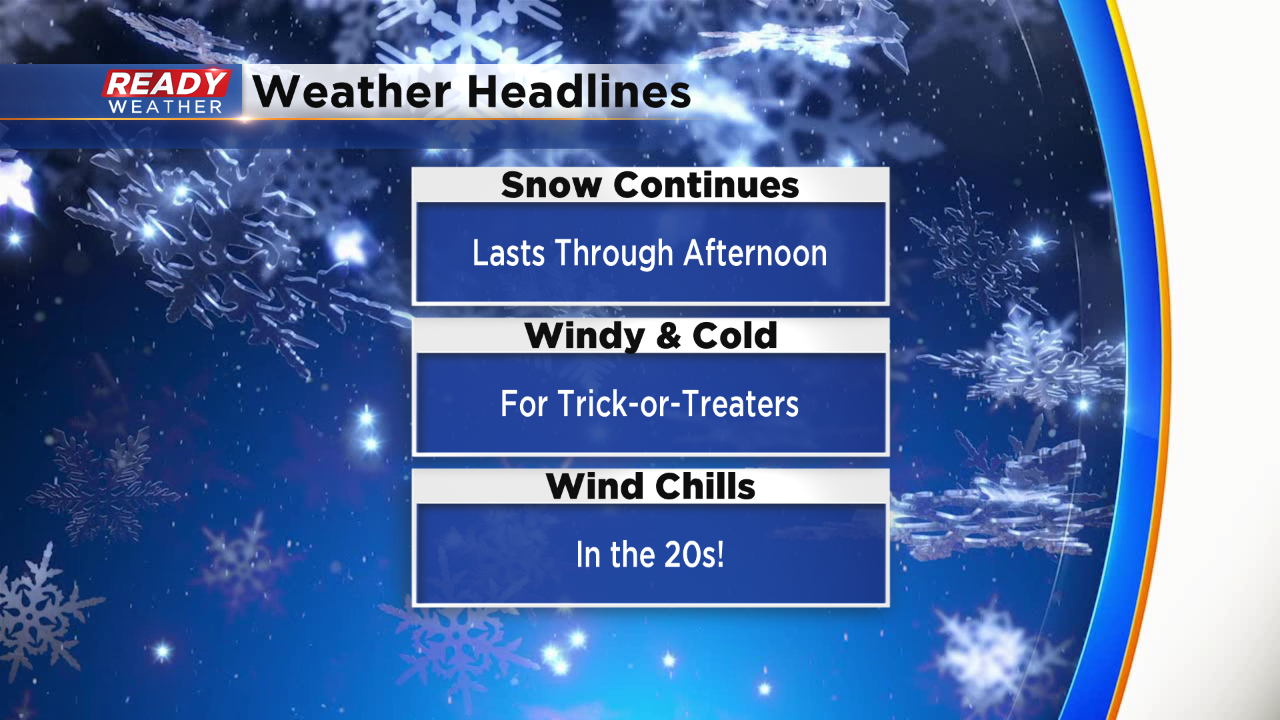 The winter weather advisory remains in effect for all of southeast Wisconsin until 3 p.m. Light to moderate snow is still falling at a steady rate and intensifying in some communities as heavier snow bands begin to pivot. Snow totals continue to come in with most between 2-4". Another few inches will be possible by the end of the afternoon. 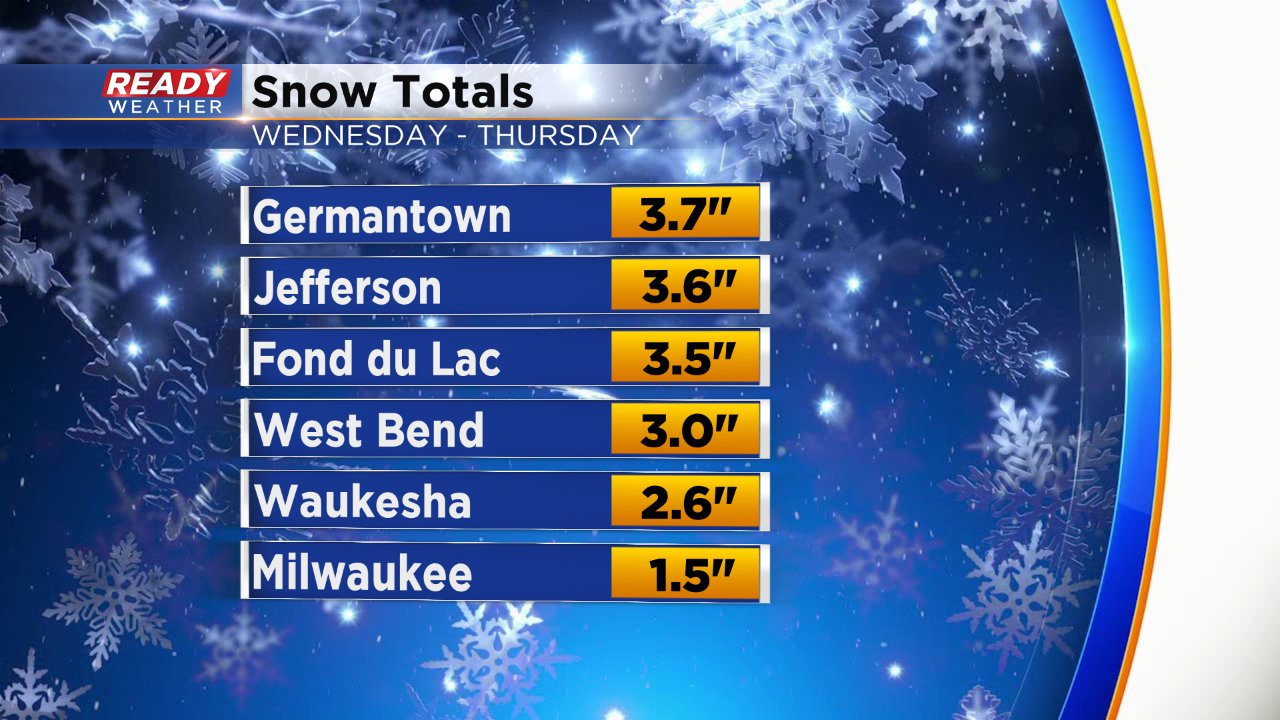 The snow in Milwaukee combined with the dusting we saw earlier this week makes October 2019 the 5th snowiest on record. By the end of Thursday it could easily take over the second top spot. It is by far the snowiest Halloween every on record. 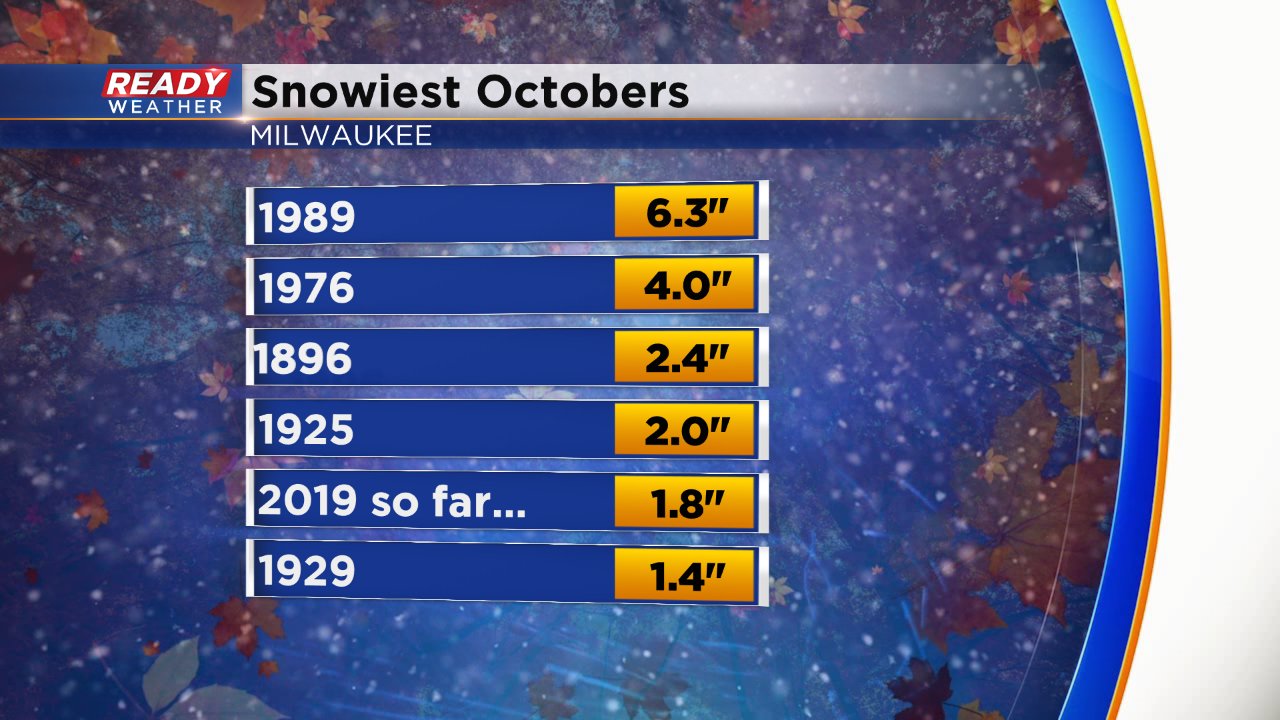 Light to moderate snow continues to move through with a decent band of snow moving through currently located from Grafton through Waukesha towards Delavan and moving east towards Milwaukee and the lakefront. 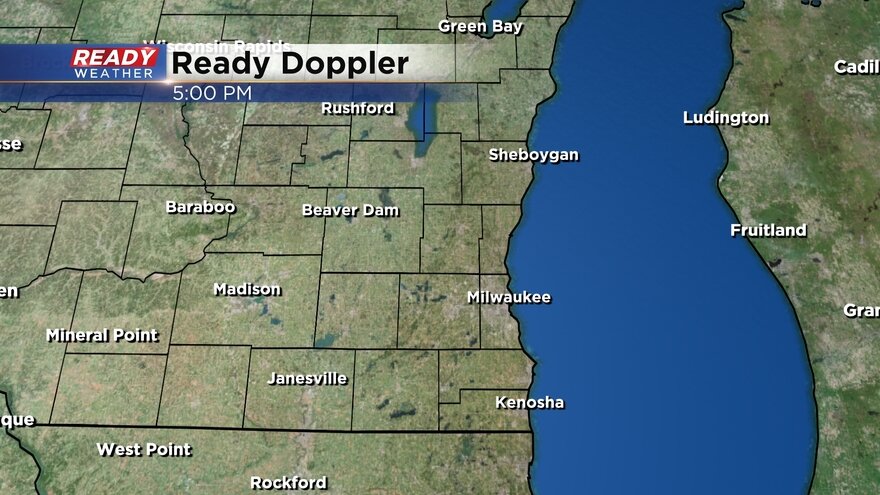 Snow totals have come in with most of southeast Wisconsin seeing 1-4" of snow so far with another 1-3" possible. 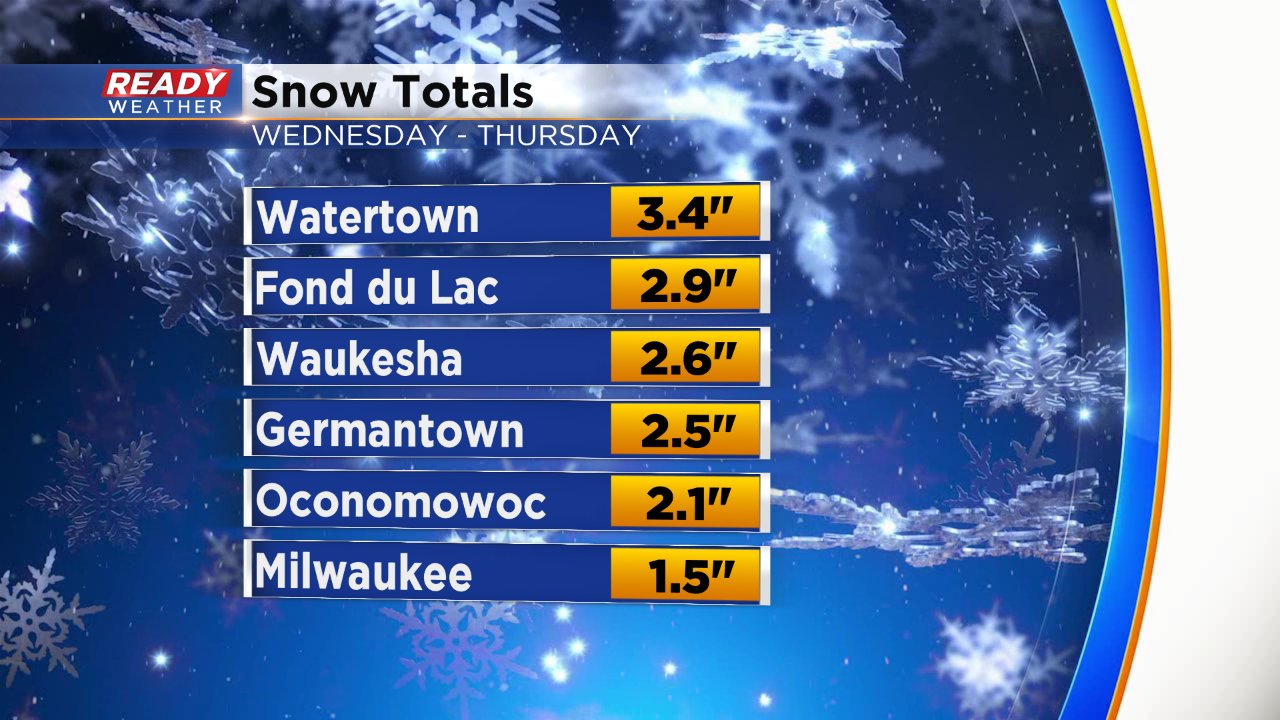 It comes as no surprise that this is now officially a historic, record breaking snowfall in Milwaukee. The snow total since last night is 1.5" but 1.1" of that fell since midnight making this the snowiest Halloween on record beating 1926 when we had 0.4" of snow.

Steady light to moderate snow continues to fall this Halloween morning. Expect the steady snow to continue through at least late morning.

Without official numbers, it's safe to say it's the snowiest Halloween on record. The old record is 0.4" sent back in 1926. The last time we had any measureable snow on Halloween was 2014.

Light to moderate snow started falling Wednesday evening and has continued all night long. Expect the snow to continue fairly steadily through the morning and into the afternoon. Here's a radar image that will update with time: 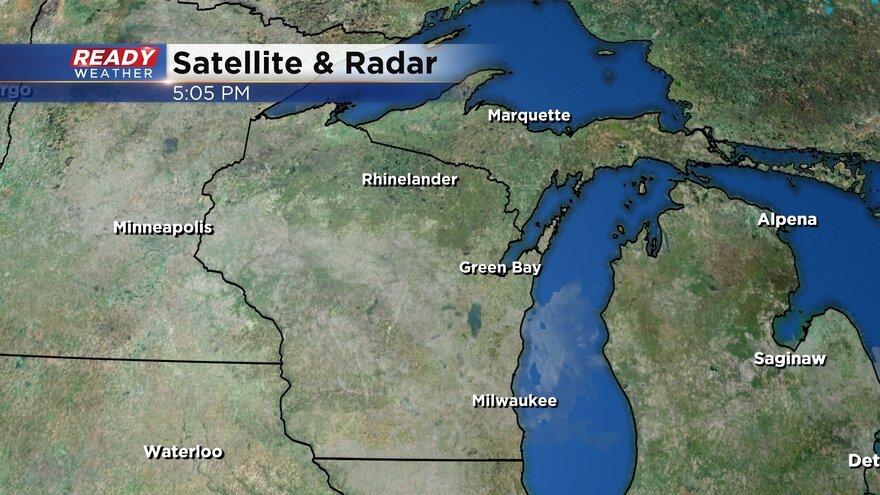 A winter weather advisory is currently in effect for all of southeast Wisconsin until 3 PM Thursday afternoon. 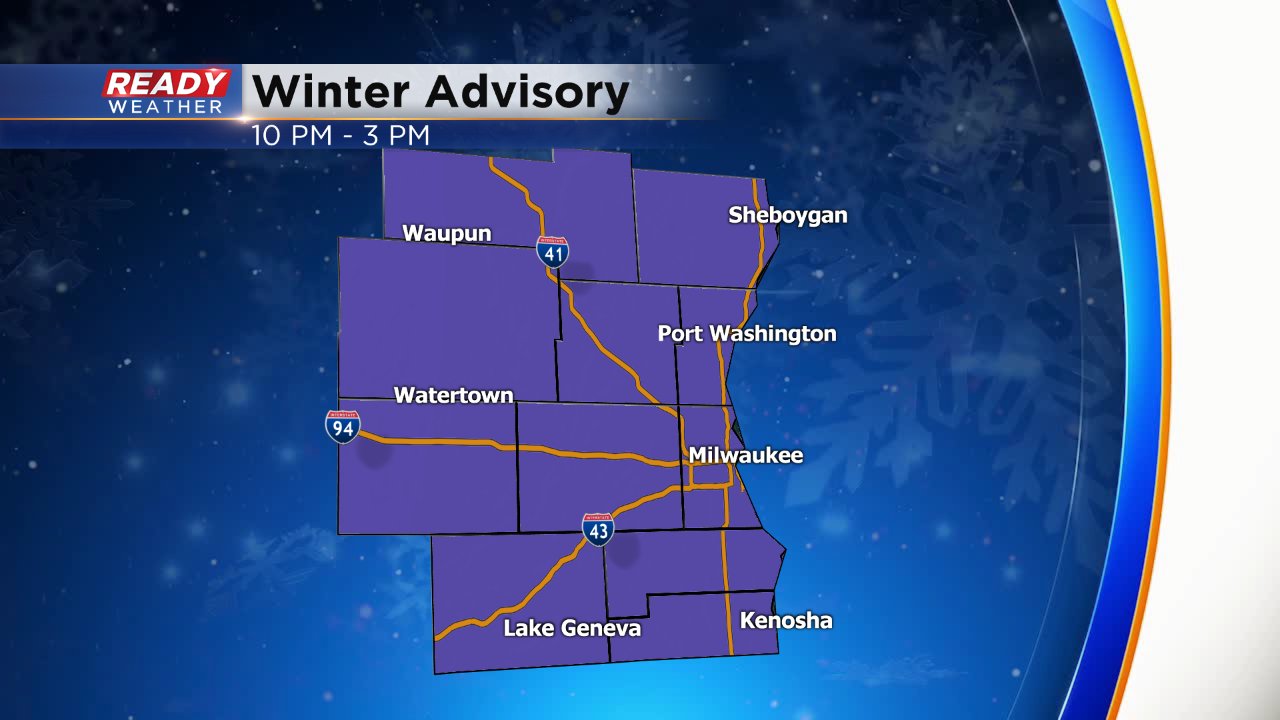 Madison has already received record breaking snow with over 1". The official total in Milwaukee at the airport as of midnight was just a few tenths. The record snowfall for Halloween is 0.4" set back in 1926 which should be a record we easily break. 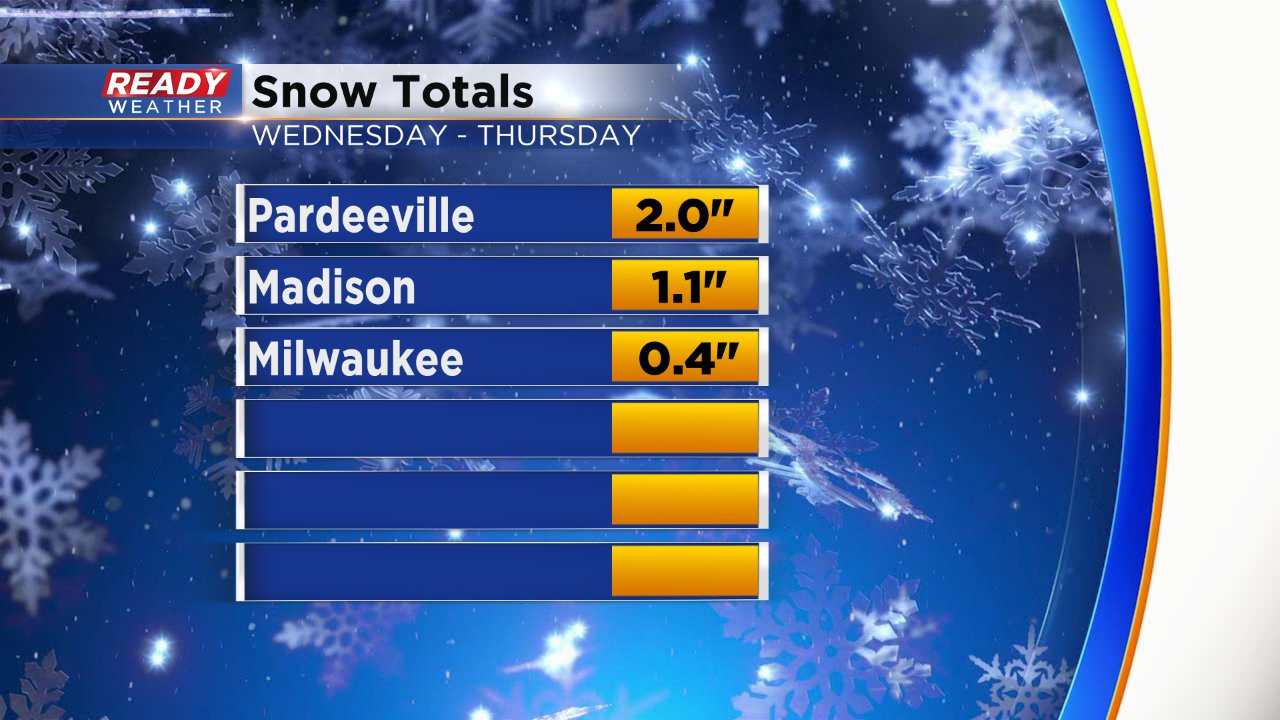 Snow totals really haven't changed much with all of southeast Wisconsin expected 2-5" of snow. The heaviest of snow will fall Thursday morning through early afternoon before getting better by late afternoon into the evening. 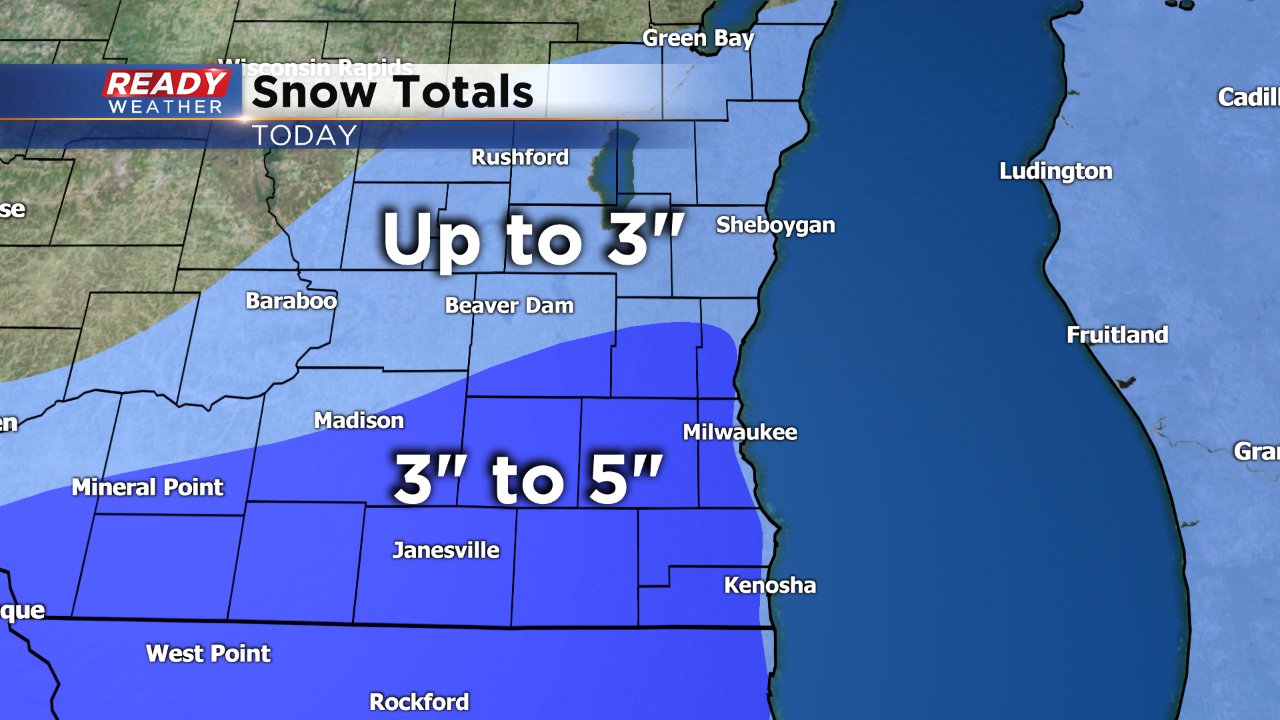 Trick-or-treaters should be okay but it will be chilly with wind chill values this evening in the low 20s. 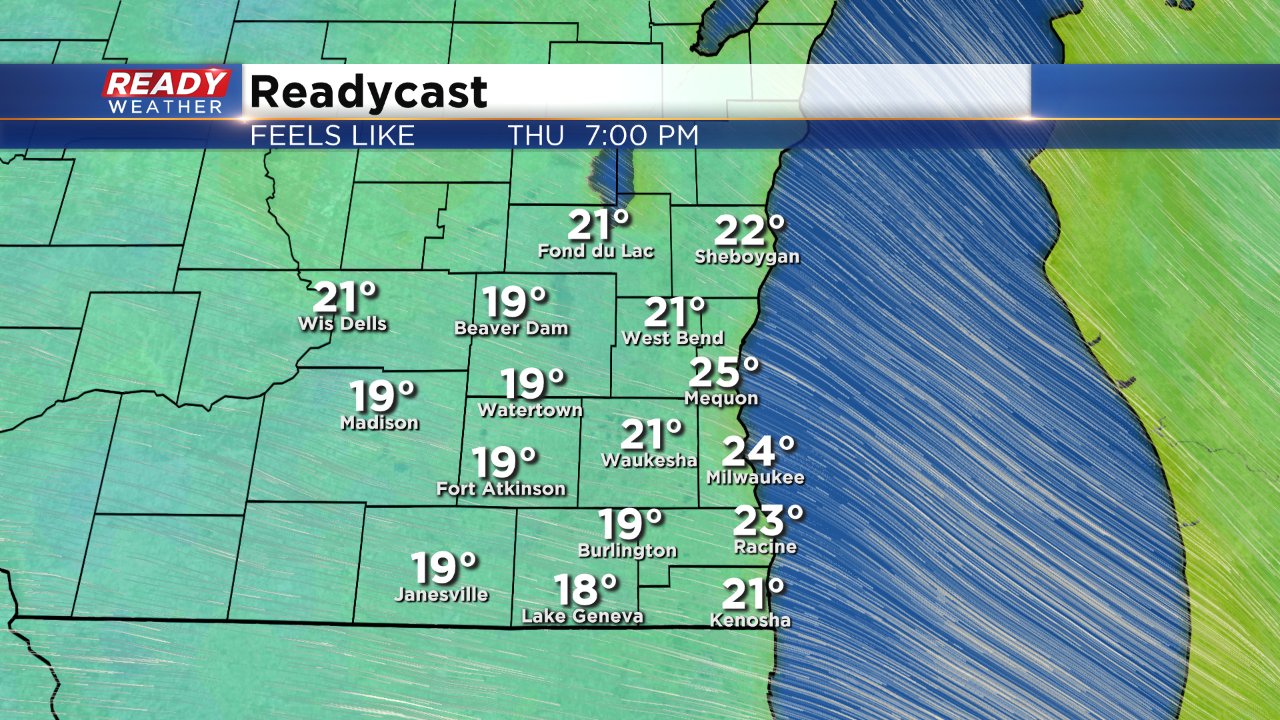 Download the CBS 58 Ready Weather App to track the snow as it comes down.