MILWAUKEE (CBS 58) – State Senator Lena Taylor is being removed from the Joint Committee on Finance after allegations of bullying an employee and discrimination.

Senator Taylor has served on the Joint Committee on Finance for more than a decade of her 15-year career.

It’s the committee that makes all the financial decisions for the state. CBS 58 obtained a copy of the Human Resources Letter. 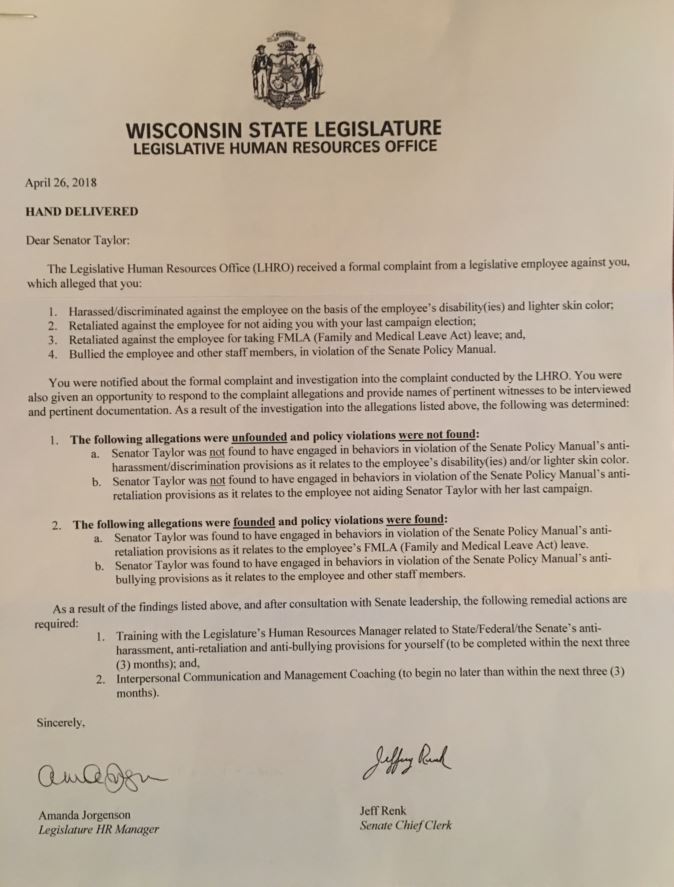 It claims Taylor discriminated against a black employee because she had lighter skin color. It also alleges Taylor retaliated against the employee for taking Family and Medical Leave Act (FMLA) leave.

The complaint was filed back in 2017. Sen. Taylor says this is politically motivated and sent CBS 58 the following statement:

“The complaint was made by a disgruntled employee who was both unable and in some instances unwilling to meet the requirements of the Madison based position, to include reporting to the state Capitol. Corrective measures were rebuffed or deflected with claims of unfair treatment. Furthermore, the employee received an $80,000 taxpayer-funded “no show, no work” arrangement for nearly a year for a process that should have been concluded in eighty days according to the Senate manual. Even with my retention of legal counsel, I am concerned about the process. With only one individual responsible for providing advice and guidance on personnel matters, to both the employee and the legislator, it is a conflictual relationship at best. Additionally, that same person must perform the investigation, conclusion of findings, and the summary of decision of an employee dispute.

Despite agreeing to the recommendations that resulted from this process, I have been removed from the Joint Committee on Finance by the Senate Majority Leader. It is unfortunate that Milwaukee will lose an experienced, progressive, and relentless voice at a time that Milwaukee schools, city and county needs more help from teh state's budget committee. Regardless, i will continue to be a voice for the interests of the constituents I serve."

CBS 58 will continue to update this developing story on air and online.