This Weather Blog is now outdated. Click here for the latest forecast on the Tuesday snow. 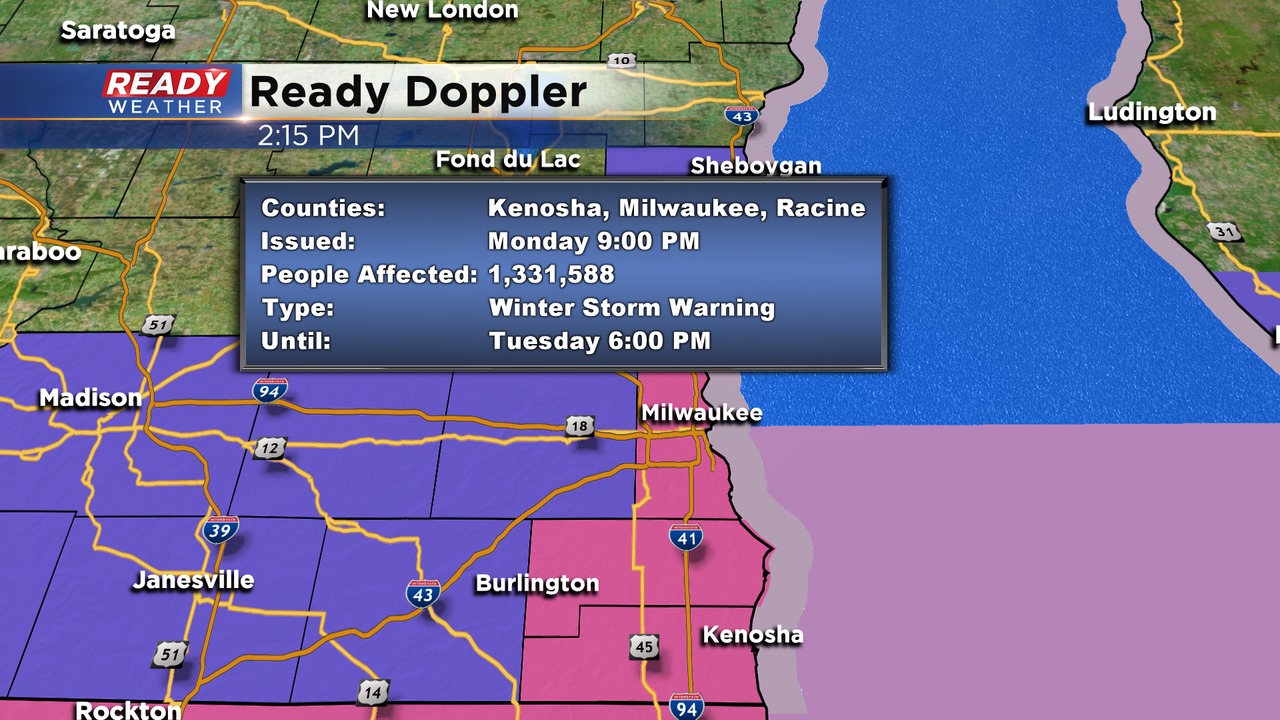 The NWS has upgraded Milwaukee, Racine, and Kenosha counties to a winter storm warning tonight through Tuesday.  These areas will be impacted the most from heavy snowfall.  The counties in the winter weather advisory remain the same.  We don't anticipate the snow to really start until after 10 pm. 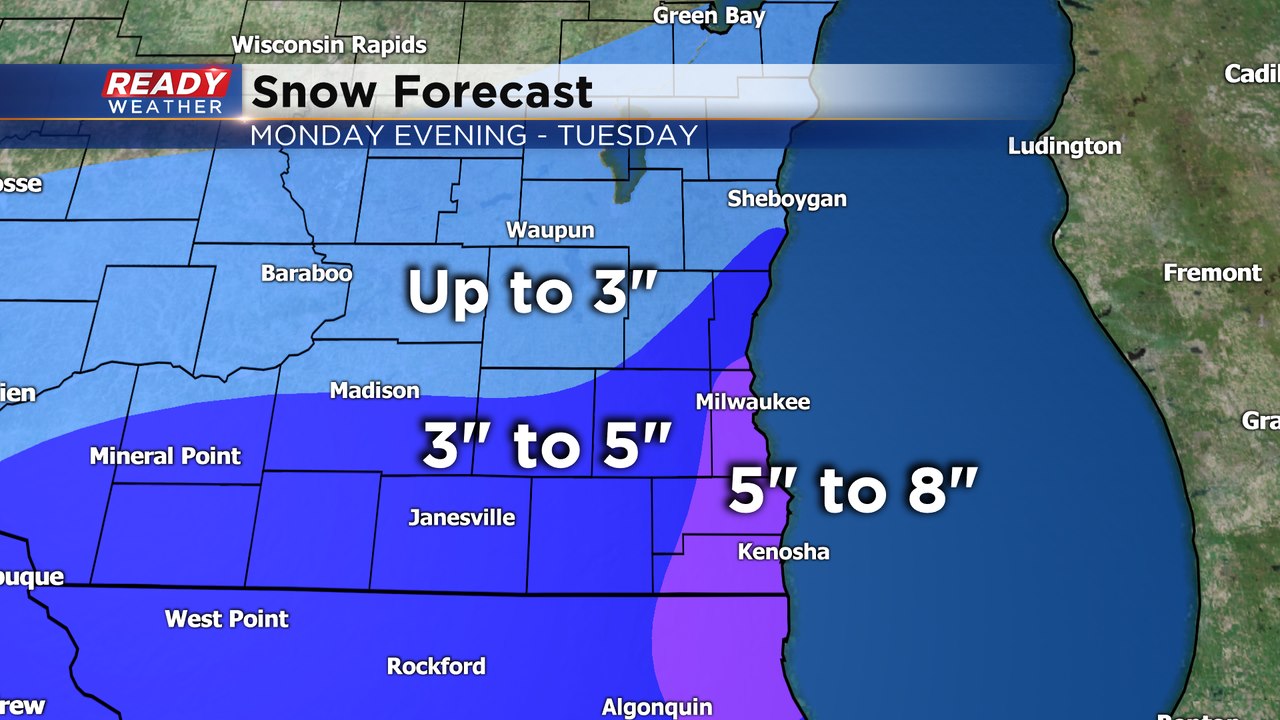 The totals for the warning area have gone up slightly.  Those areas close to the lake could see some isolated 8" totals due to lake enhancement.  The snow will have a a lot of dry air to overcome at the start; however, overnight, the atmosphere should become saturated with a strong northeast wind creating some heavy snowfall.

The heaviest snow will fall between 1 am and 10 am Tuesday.  Some lingering snow is possible Tuesday afternoon, but the morning commute will be the most impacted.

Confidence is increasing that this winter storm will take a more northerly track through central Illinois and Indiana, bringing some heavier snow into southeast Wisconsin. 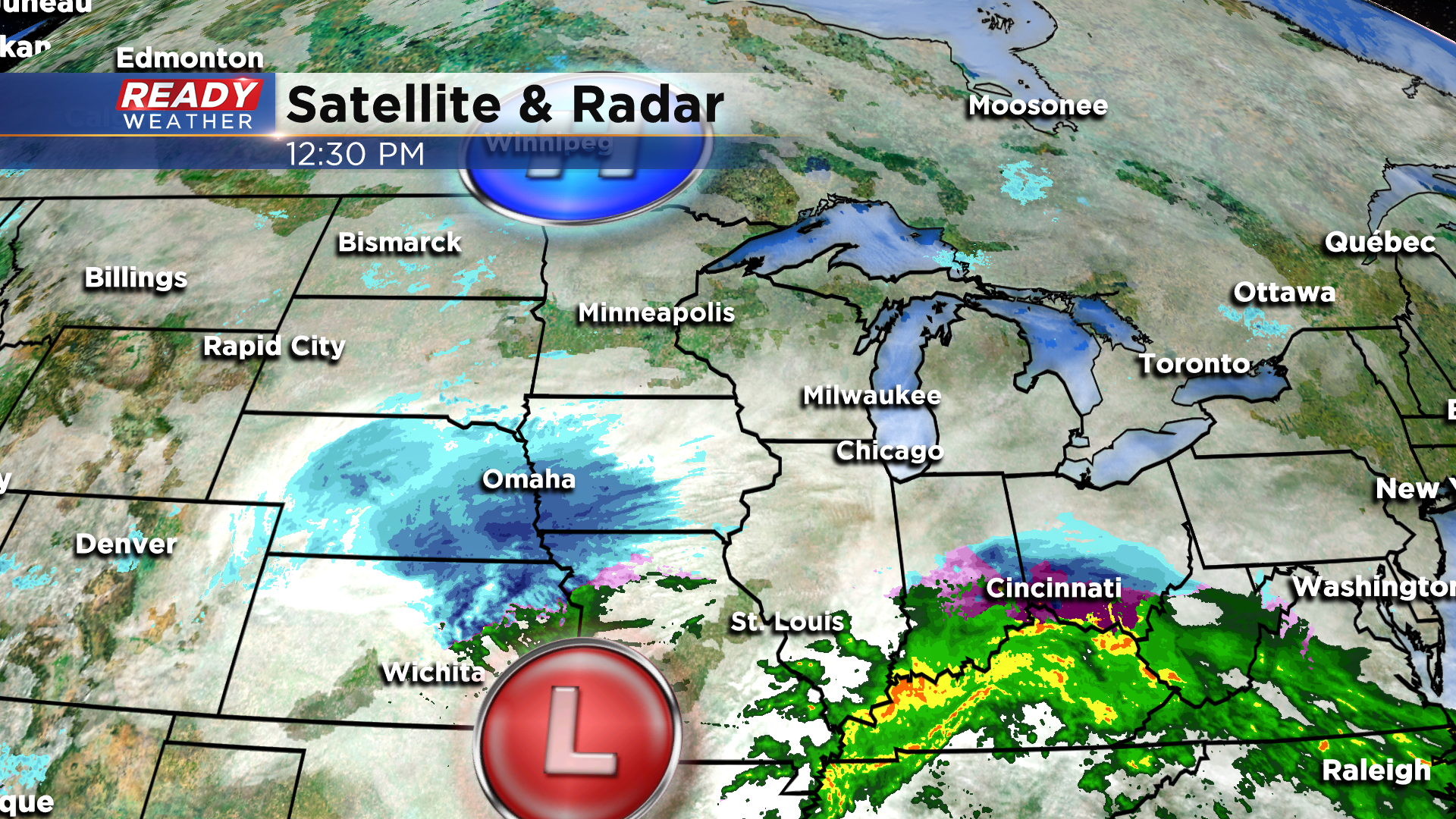 While the snow will initially battle dry air this evening into tonight, especially north of Milwaukee, snow will start to pick up in intensity heading into Tuesday morning. Strong northeast winds gusting 20-30 mph will not only cause blowing and drifting, but it'll add some lake enhancement to the snow from Milwaukee to Kenosha. Plan on major impacts during the morning commute in the Milwaukee metro down to the state line. 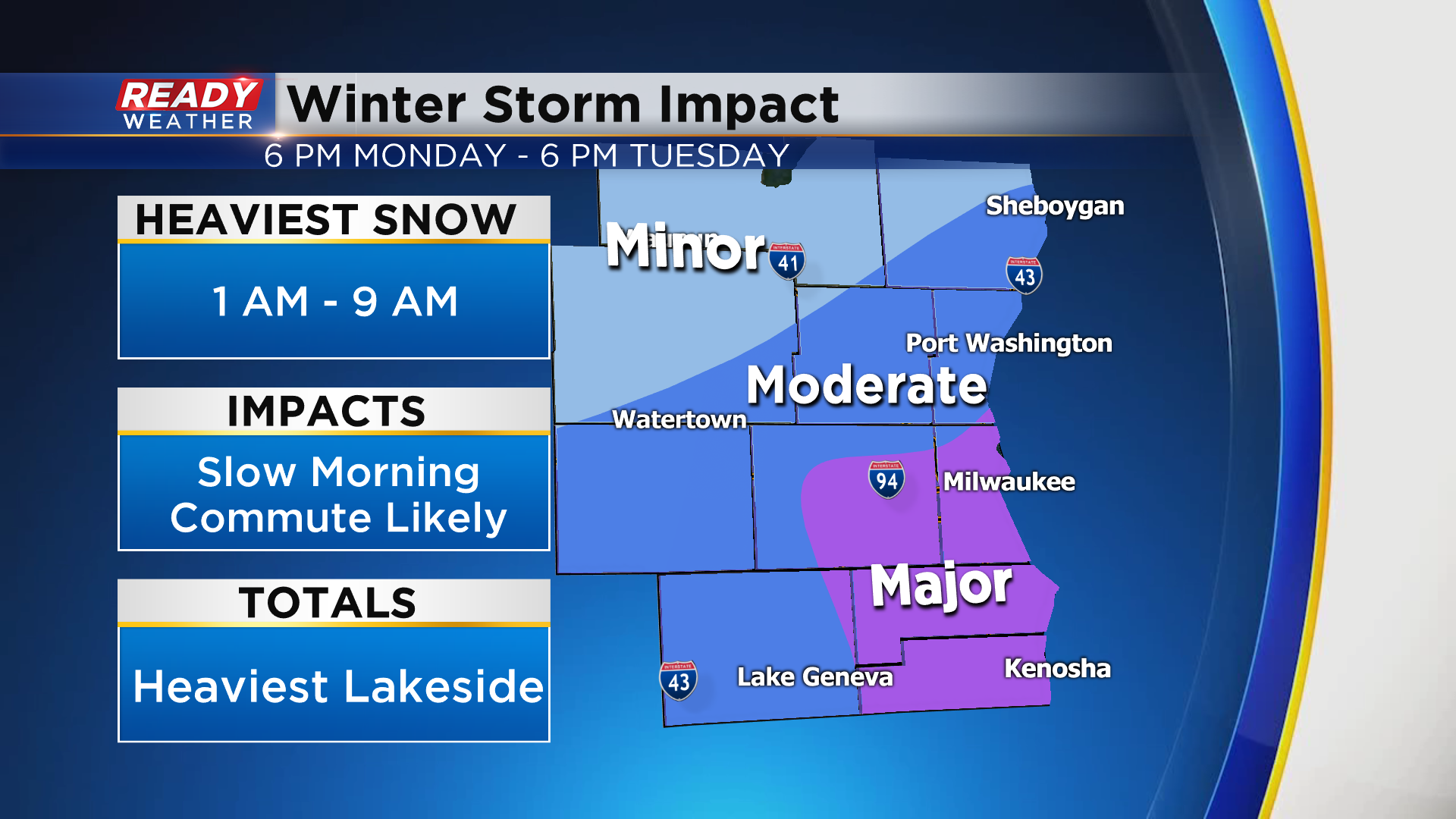 Heaviest snow totals of 5 to 7" are possible from Milwaukee to Kenosha due to the lake enhancement. 3 to 5" will be possible in surrounding areas with the highest snow totals also expected lakeside in Ozaukee and Sheboygan counties. 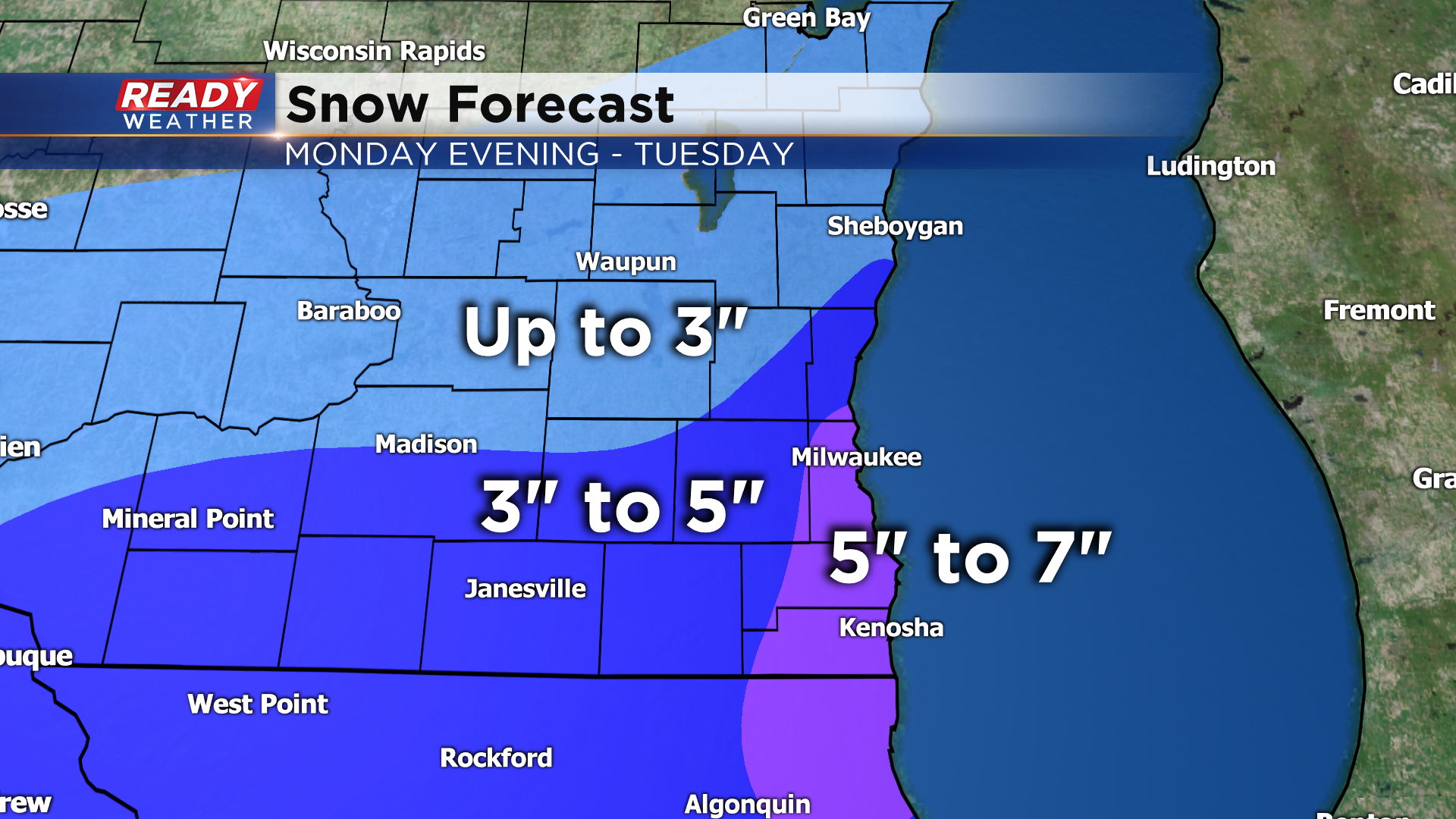 There may be a sharp cut off in our far northwest areas where only minor impacts are expected.

A few lake effect snow showers can't be ruled out during the day today with a strong NE wind gusting to 30 mph. Our snow chances ramp up this evening when snow will start moving in from south to north across the local area. Snow is likely tonight through mid-morning for most of the area. Lakeside and southern counties could see lake enhanced and lake effect snow linger through the rest of Tuesday morning into the afternoon. 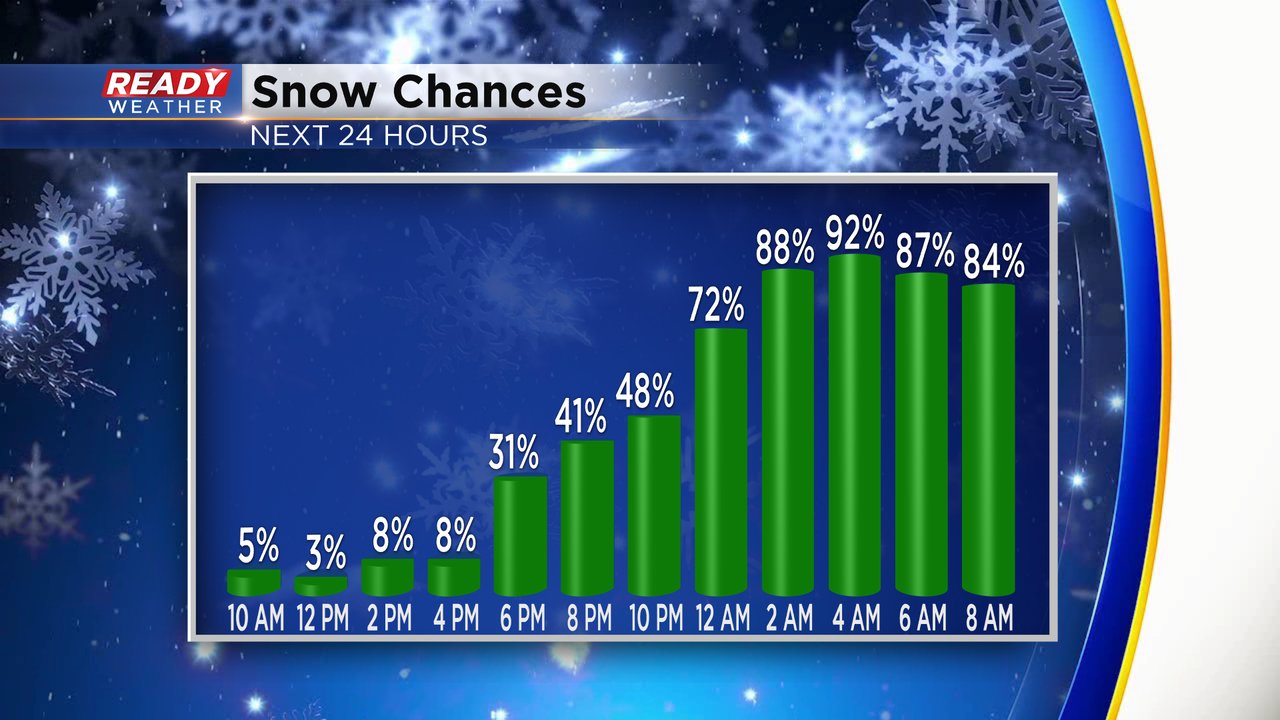 Our snowy January continues. We haven't had a ton of snow but we've had a lot of light snow and persistent flurries. Our next round for snow moves in Monday evening and lasts through at least Tuesday morning with some seeing snow through most of the day. A winter weather advisory has been issued for most of our counties except Fond du Lac and Dodge. The advisory starts at 6 p.m. Monday evening and lasts for 24 hours until 6 p.m. Tuesday. 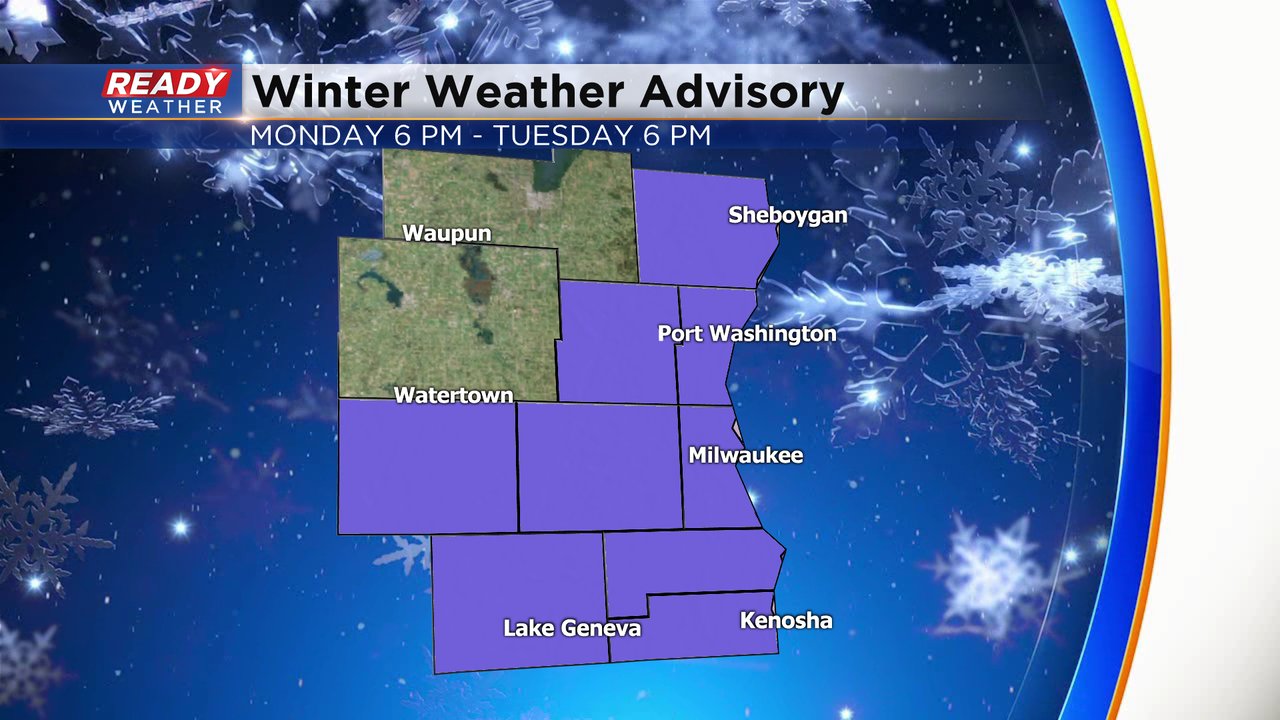 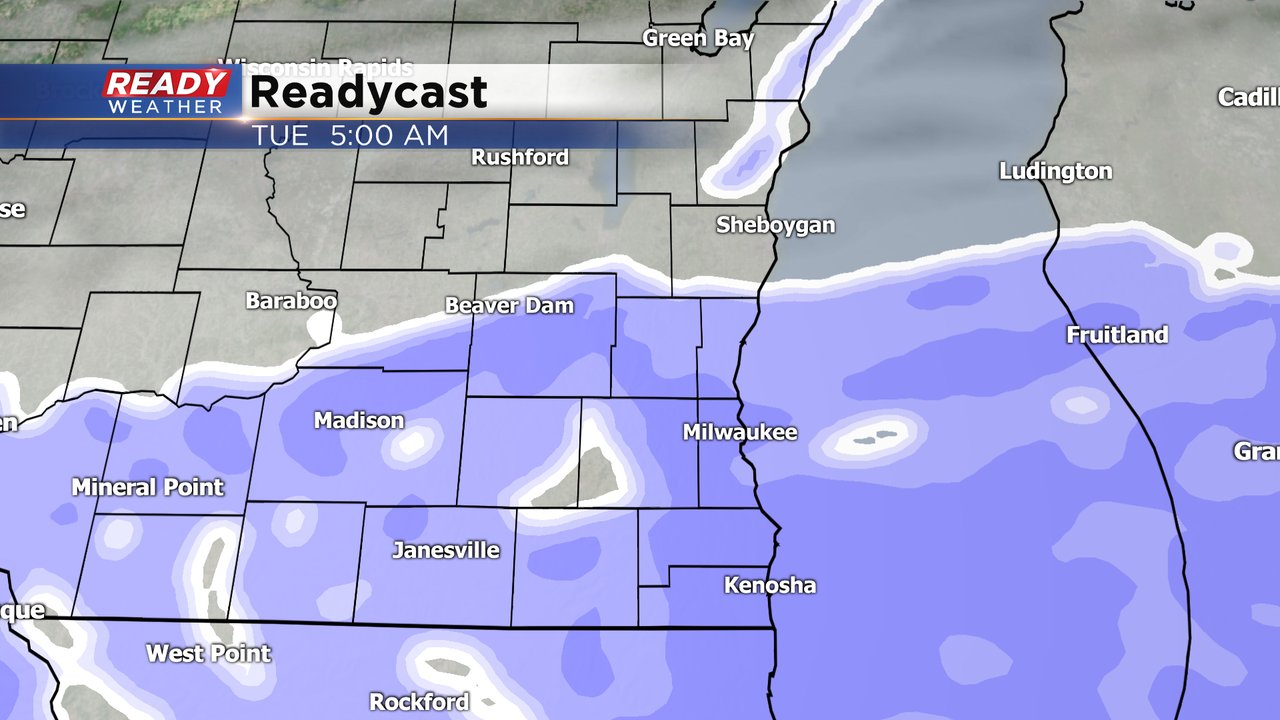 Over the last 24 hours weather models have across the board trended north. That increases our chances for northern areas like Fond du Lac to see a couple inches of snow and it's possible they could eventually get added to the winter weather advisory. The shift to the north also increases the chance that some of our communities near the IL border see over 6" of snow. With a strong wind out of the northeast throughout the entire storm we will likely see some lake effect or lake enhanced snow. A few counties could get upgraded to a winter storm warning if those trends continue for over 6" of snow. 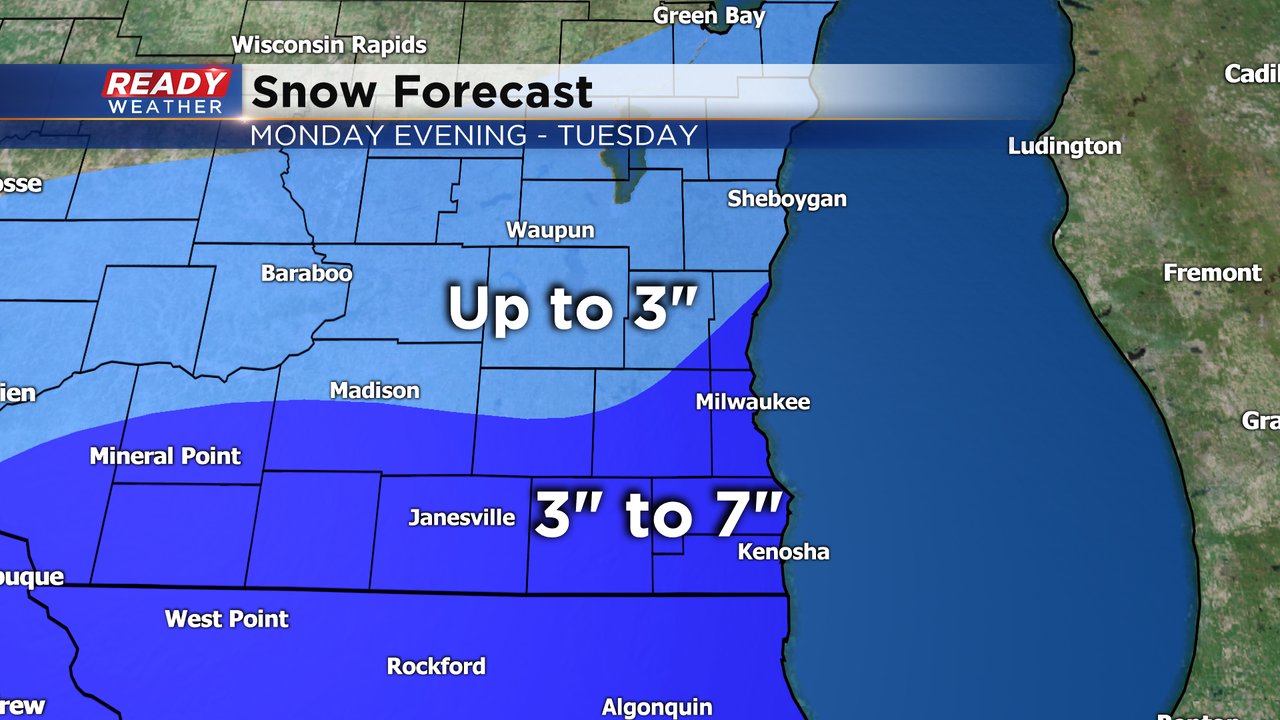 Our confidence in the forecast right now is moderate. Precipitation type looks consistent with it all just staying snow. Timing looks pretty good with snow starting later Monday evening becoming heavy overnight into Tuesday morning and then lingering into Tuesday afternoon for some spots. Where confidence is less is in the storm track and subsequently snow totals. If the storm track continues to shift it would change the snow amounts so it is possible that we see some changes over the next 24 hours before the snow arrives.

Wind will be a factor during the storm with gusts over 30 mph at times. That will reduce visibility, especially Tuesday morning. Snow covered roads will also be likely. Cold air and ice are not threats with this storm. 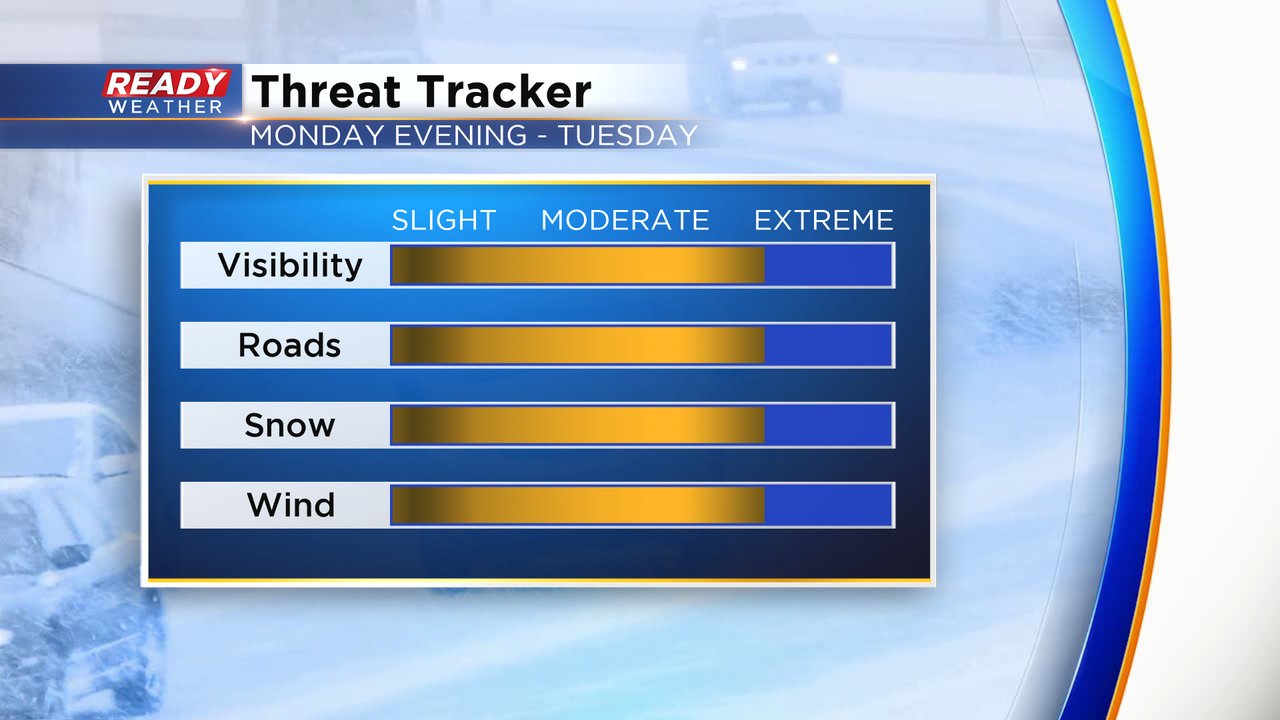 Download the CBS 58 Ready Weather app to track the snow as it arrives and stay up to date on any forecast changes.