Snow will end by 1 AM. More snow possible for Tuesday. 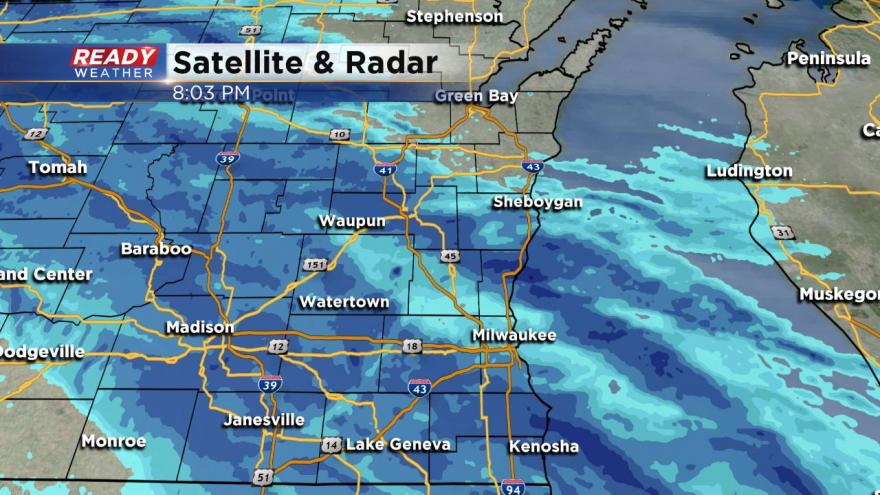 Snow showers will come to an end after midnight.  Most areas have picked up between 1" to 3" of wet snow.  An additional inch of snow is possible for Tuesday; however, that snow will likely be on and off throughout the day and not steady.  We expect the snow showers to come to an end by Tuesday evening. 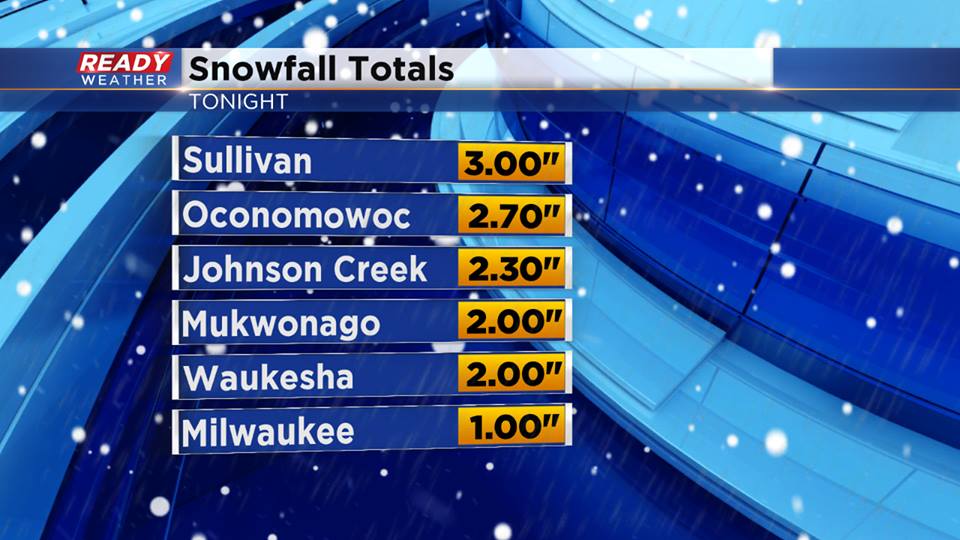 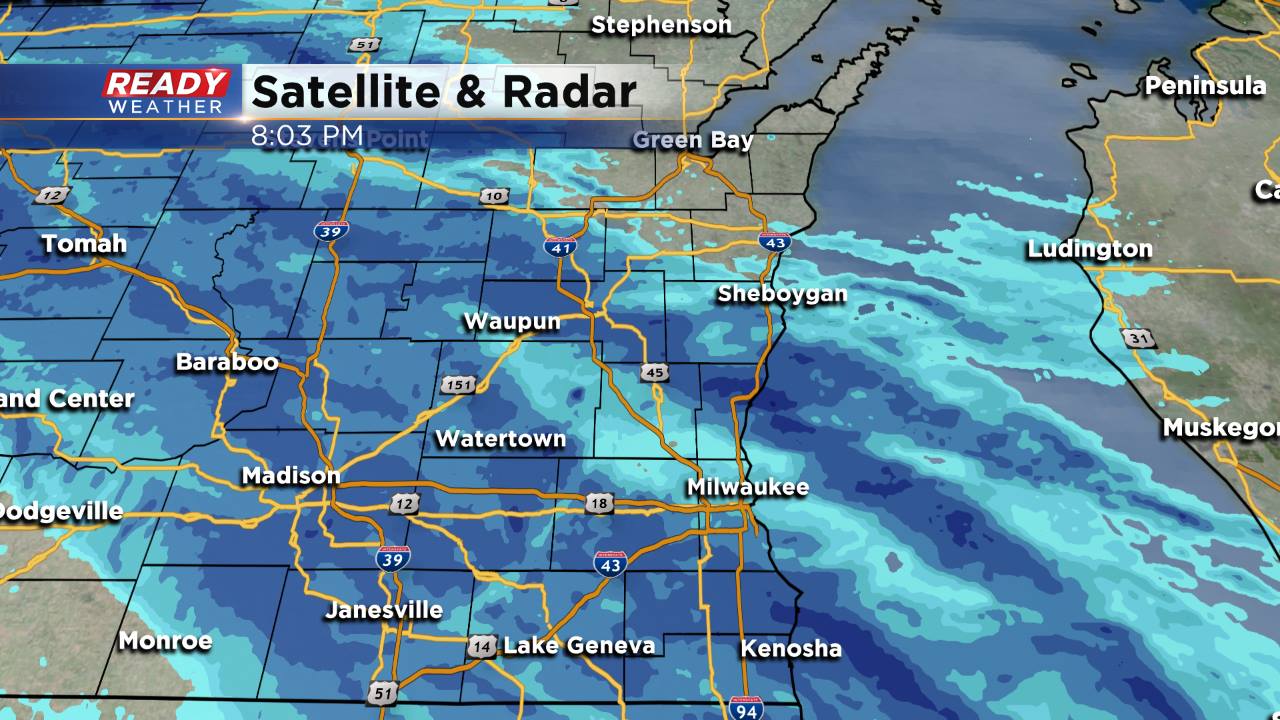 8 PM Update:
Almost 2" of snow has already been recorded in Madison.  The snow will continue to pick up across the Milwaukee metro over the next several hours.  The snow has been slow to materialize near the lake.  We expect more snow to fall with this next band. 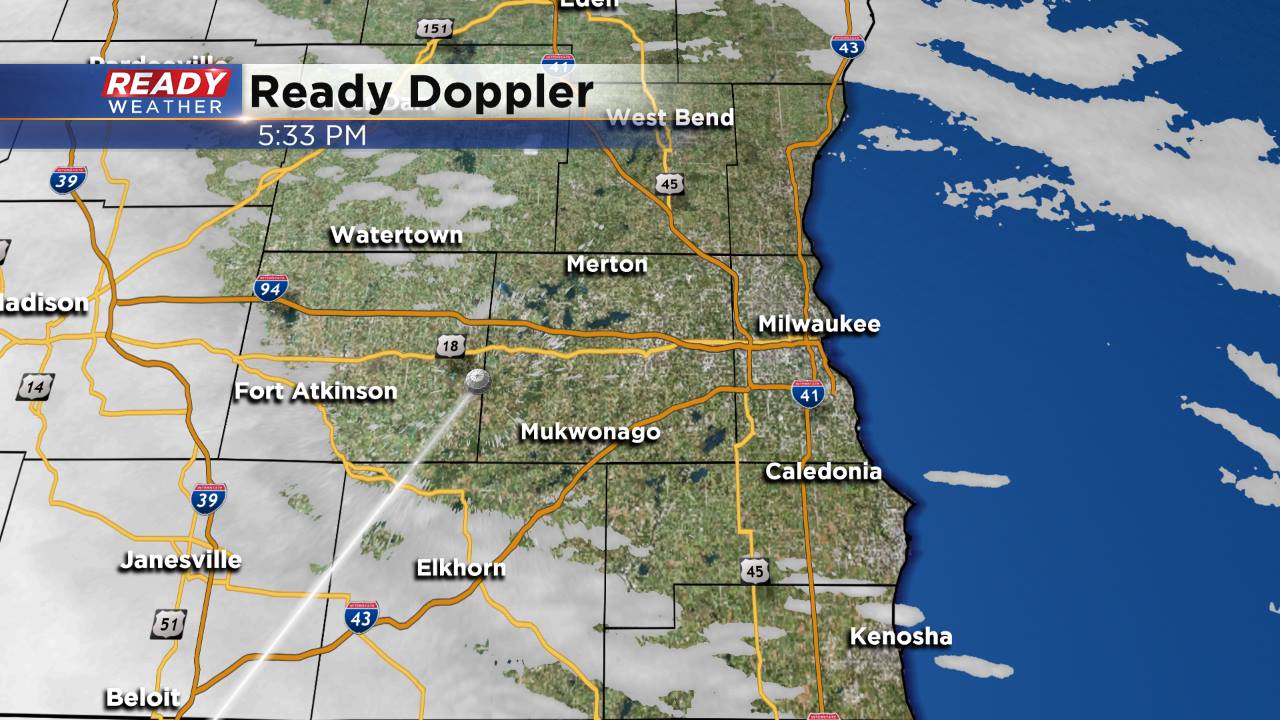 The winter weather advisories are now in effect for the entire area.  We are tracking snow showers right now.  Most of the metro has been quiet; however, snow is now pushing acros the southwest part of the viewing area.  By 8 pm snow should be falling throughout southeastern Wisconsin.

The snow will be heavy at times especially between 8 PM and 4 AM.  Most areas will pick up 2" to 3" with the initial band.  More snow will continue through Tuesday before wrapping up late Tuesday night.  Storm totals between 3" to 5" look likely.

The wind will remain strong so visibility will also be an issue along with slick roads. 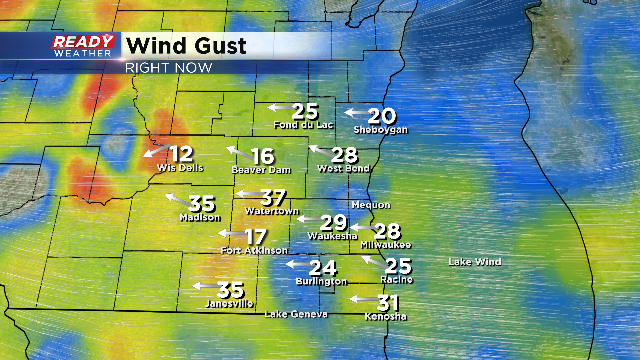 The winds this afternoon have been really strong gusting at times over 30 mph.  The winds will remain an issue tonight.  You couple the strong winds with snow and visibility will become an issue.

The snow is still expected to arrive between 5 pm and 10 pm area-wide.  We are monitoring the changes. 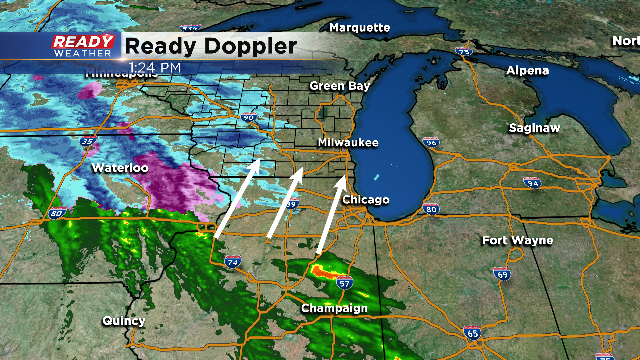 No real changes to the forecast as of 2 PM.  Take a look at the band of precipitation to our south.  This band will change over to snow within the next couple of hours as it moves north.  The band will move across the area this evening and into the overnight producing 1" to 3" of wet snow.  Slick travel going into Tuesday morning is expected.

Another batch of scattered snow showers will arrive Tuesday morning into the afternoon and evening.  Total snow for the event will range from 3" to 5" with the heaviest snow across the northern part of the area. 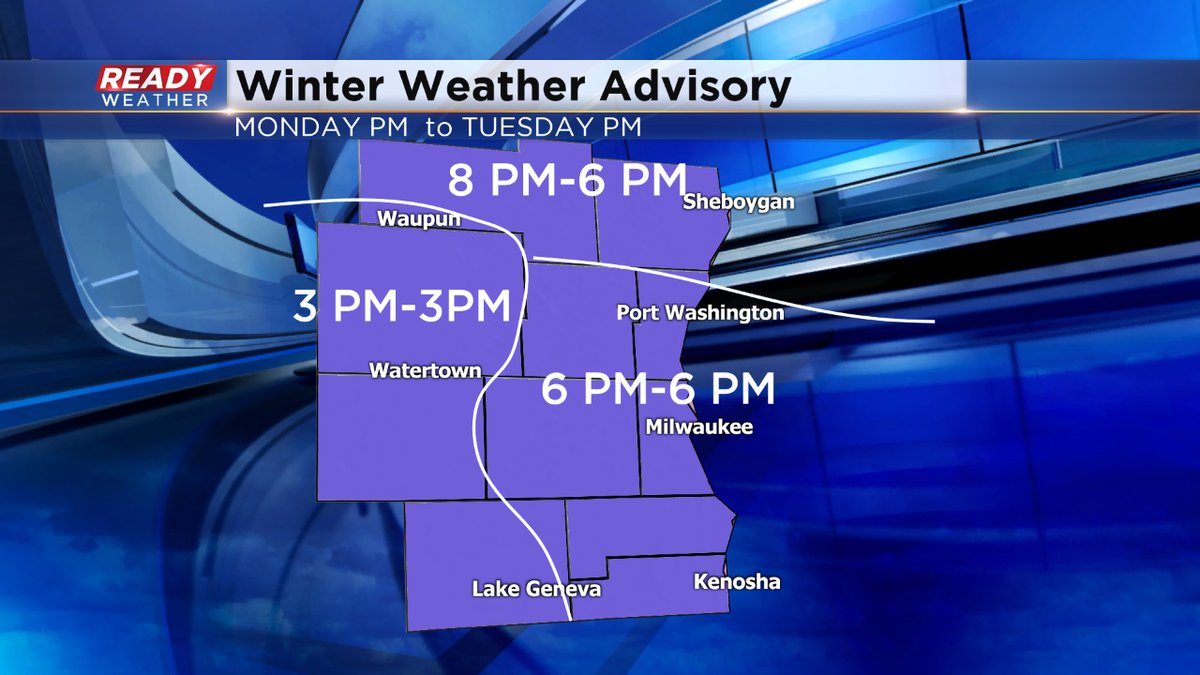 Get ready for a fairly active 24-hour period, weatherwise.  Snow is still on track to start flying, especially by dinnertime across the metro area.  It'll be a little sooner (after 3pm) for the extreme western sections like Dodge and Jefferson Counties.  That's why the Winter Weather Advisory begins earlier there.  It begins at 6pm across Milwaukee and Waukesha Counties and should continue throughout much of Tuesday.  3-5" of snow is forecast throughout southeast Wisconsin.  The heaviest amounts should fall this evening.  Thunder snow is possible too plus gusty winds will create visibility problems as well.  This will be a heavy wet snow.

Stay tuned to CBS58 throughout the day, on air and online, and we'll get you ready for the snow!

Periods of snow are expected later today into Tuesday evening with a vigorous area of low pressure. The low will track into the area by this afternoon kicking up snow as early as the commute. The whole area will see snow by this evening as the atmosphere saturates. Winds are expected to be very strong throughout the day today and into tonight. 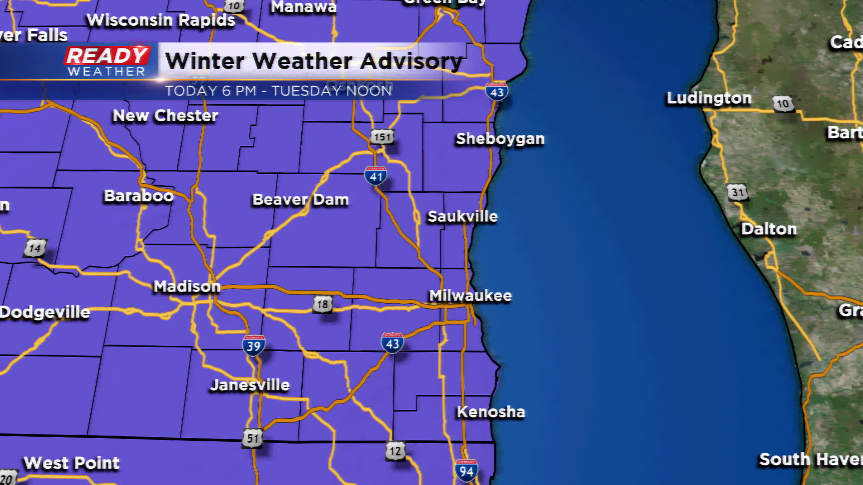 The heaviest snowfall will take place this evening with poor visibilities and those strong winds. Driving is not recommended. There is the potential for a mix at times with freezing rain, sleet, or some icing with this band. A Winter Weather Advisory has been posted by the NWS for this evening at 6pm and running until noon tomorrow. 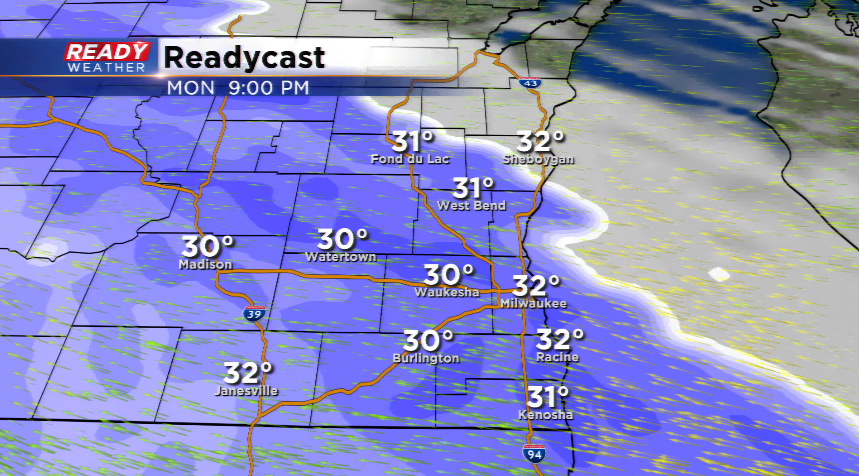 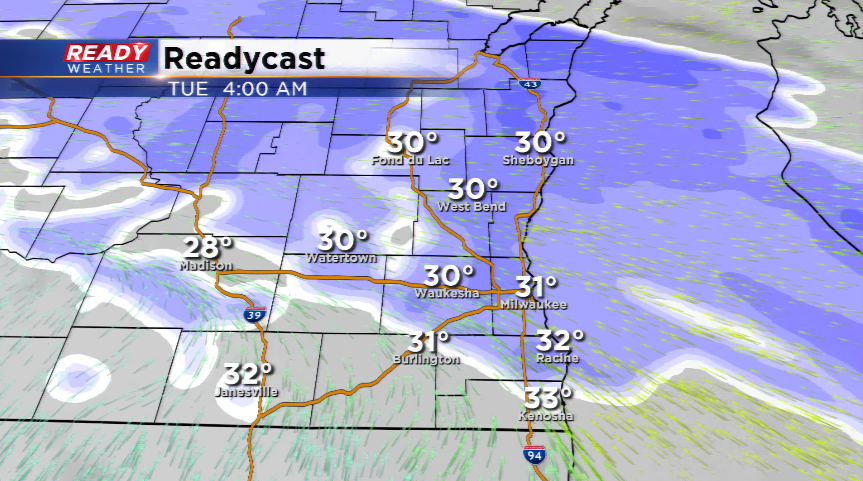 Snow showers are possible throughout the day tomorrow, especially lake effect squalls. This will lead to tricky forecasting for additional snowfall tomorrow. 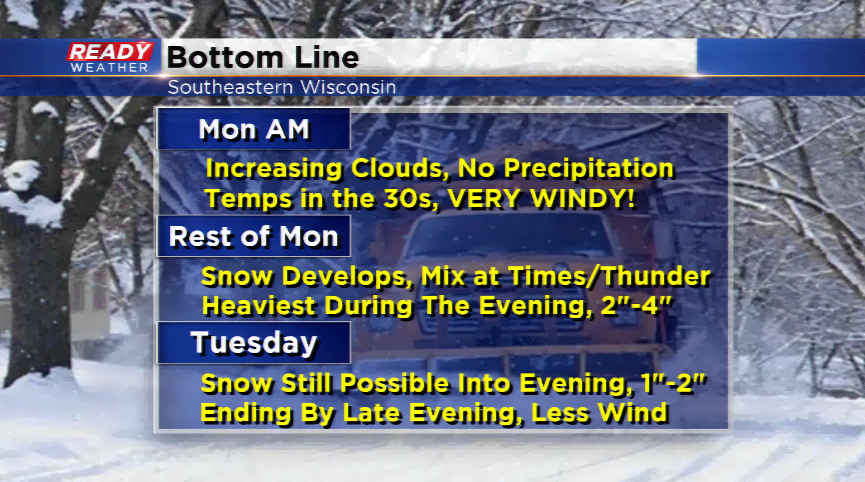 Overall, the area will see 3”-5” of snowfall. Southern areas will see the lower of that spectrum while the northern parts of our area could be closer to 5” or 6”. There’s even the potential for thundersnow in some spots. With these convective bands, this is the area that could see the most snowfall. 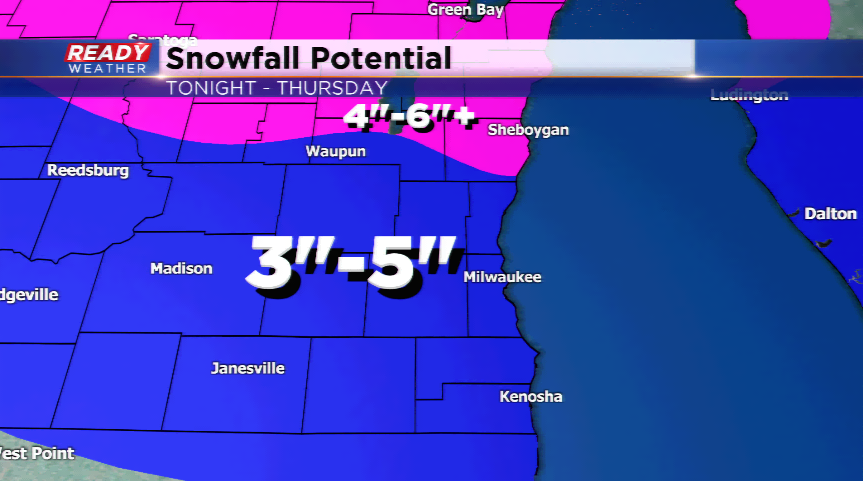 Download the CBS58 Ready Weather App to track the snow from your fingertips!