Snake bites increasing in US 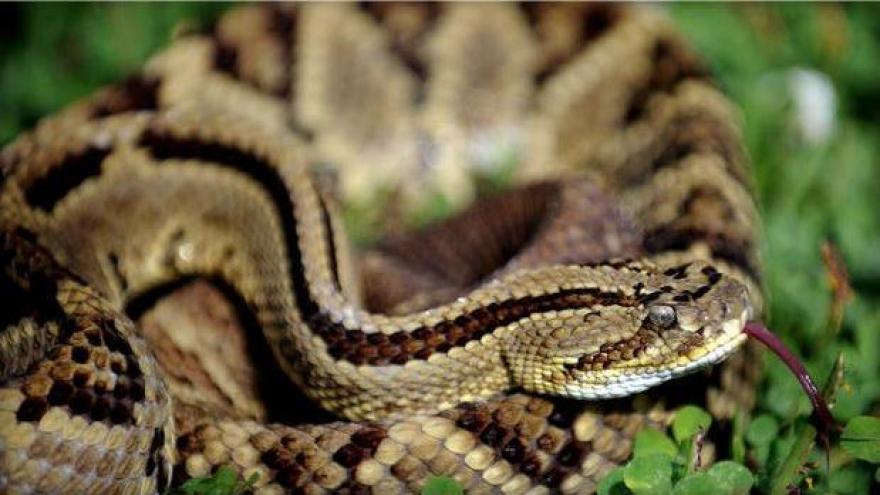 "My mom and I decided to take the dogs on a walk," recalled Meg, now 12 years old, as she described the late mid-August evening in the suburbs of Birmingham.

"As we were walking out, I heard something jingle in the door, so I turned around and it was my mother's car keys from when we took in the groceries," said Meg. Ignoring the keys, she continued down the steps, pulled by dogs eager for a romp in the yard.

The front stoop is just two steps leading down from the front door, said her mother Suzanne Scott-Trammell. Azalea bushes bookend the steps of the house, which sits on a lawn in front of a creek that runs through the town, home to 33,000.

"I felt something sting my toe," said Meg, who was wearing sandals at the time. "I immediately started crying. I thought: 'A snake bit me and I'm gonna die!' "

Meg never saw the actual snake, she only heard a rustle in the bushes. She suspects it bit her while she paused on the stoop or maybe while descending the steps. Though she didn't immediately feel the bite, she felt pain moments later.

To her, it felt like a bee sting. With her big toe swelling and beginning to hurt, her mother inspected and "saw the fang marks and they were kind of bleeding a little bit," said Meg. "My dad called 9-1-1."

Though she had a snake bite kit in the house, Scott-Trammell wasn't sure how to use it.

"I thought you had to suck the poison out -- that used to be what they said," said Scott-Trammell. "So I'm Googling, trying to figure out, do I have to suck [the venom] out and how much time do we have?" (Snake bite kits are not helpful, some experts say.)

During the panic, paramedics arrived. They took one look at the bite, told Meg she wasn't going to die, and helped her into the ambulance. While Meg and her mother were on route to Children's of Alabama, a police officer searched the azalea bushes, took a photo of the snake, and texted it to Scott-Trammell.

Opening the text, she saw a copperhead, a venomous inhabitant of the eastern United States.

In the US, the Centers for Disease Control and Prevention estimates that 7,000 to 8,000 peopleare bit by venomous snakes each year and about five of those people die.

Dr. Joann Schulte, an epidemiologist with the North Texas Poison Control Center, said that "over the past few years, the numbers [of snake bites] have been rising by maybe 100 to 200 a year."

"The numbers are going up in most states gradually," said Schulte, "simply because as we have more global warming the snakes can do better further north." Generally, snakes are known to inhabit the lower 48 states. A typical hotspot for a number of venomous and non-venomous snakes is the Southeast, especially Florida, said Schulte, yet snake bites have recently begun to rise in Georgia and North Carolina.

Deadly rattlesnakes are concentrated in Texas and the West, but a gradual migration further north appears to be taking place, said Schulte.

"I think it's going to be toward the end of June to middle of July before you know if it's a more snakey season, so to speak, than last year was," said Schulte. The numbers just aren't in yet.

Nikole Castleberry, assistant curator of vertebrate collections and herpetology collection at Georgia Museum of Natural History, said this information about an increasing number of snake bites is relatively new.

"We can only speculate -- there hasn't been any scientific study looking at it," said Castleberry.

"This last winter was really warm," suggested Castleberry as one possible reason. Both snakes and people spent more time outside, so they were more likely to encounter one another, she speculated. Recently, hospitals have been encouraged to report snake bites to poison control and the CDC, so another possible explanation is "more reporting," said Castleberry.

"There's close to no reason to think that snakes are becoming more aggressive," she added.

"Some of the factors that can make it a worse snake bite season in one state compared to another is if there's flooding. Snakes get displaced," said Schulte. "Like anybody else, they don't want to drown, so they go to higher ground."

Matthew Goode, a research scientist in the School of Natural Resources and the Environment at the University of Arizona, believes the threat of snake bites is "way overblown."

Snakes are not aggressive, Goode said, but they're defensive. "Snakes don't do things just to be mean," he said.

"Probably for the most part people walk by snakes and never know it, and I don't know how comforting that is, but that's probably the case," said Goode. Rattlesnakes, which are unique in that they can make noise, will usually let you know if you get too close, he added.

Cocking demonstrates their reluctance to launch a counter-attack. If a perceived threat escalates, though, "they'll coil, they'll hold their ground, and actually strike," said Goode. Even then, they often don't bite. "They'll do close-mouth strikes," said Goode. "They'll do feigned strikes."

Other factors influence snake behavior, too. "A pregnant rattlesnake may not be as capable of getting away so they tend to be more defensive," said Goode. When alone, they may be more likely to strike as opposed to the rare times they assemble in groups.

Goode said he's spent his life trying to convince people that snakes don't pose near the threat people think they do, but "it's not easy to do."

"Fear of snakes is obviously merited in the sense that there are a lot of venomous snakes," said Goode. Yet, there's also just "something strange about snakes -- both biologically and culturally," said Goode, who admits the lack of arms and legs and eyelids can be disturbing.

In the end, a lot of snake fear may simply be cultural, at least in Judeo-Christian societies. "The snake was in the Garden of Eden, right? And I think that gave snakes a bad rap right from the get go," said Goode.

Unreasonably fearful or not, most people simply want to avoid getting bit by a snake. Here's how.

"The primary preventative measure is being alert and looking out and knowing you're in an area where there are snakes," said Goode. Keep your hands and feet out of crevices in rocks, wood piles and deep grass.

"If you're going on a hike you want to wear shoes, not flip-flops," said Schulte. After dark, carry a flashlight and wear shoes or boots.

Leave snakes alone. Up to 70% of reptile bites are provoked by the person bitten, based on cases seen by the Arizona Poison and Drug Information Center. "Most of them tend to be males under the age of 25 who have been drinking ... they're out there messing around with snakes doing some dumb stuff," said Goode.

Never handle a snake, even a dead one. For several hours after death, "reflex strikes" can occur.

If you do get bit, the best kit is "your car keys and cell phone," according to Arizona Poison Control.

Get help quickly. Don't waste time waiting to see if symptoms develop or worse, trying to catch the snake -- it might bite you again. Do not apply either a tourniquet or ice, and don't bother taking medicine, or a shot of alcohol, the traditional home remedy. Finally, trying to suck the venom out will likely be ineffective and hurt the flesh surrounding the bite.

There's no hard and fast rule on how long is too long to wait before getting medical care. So the rule of thumb is simple: If bitten by a snake, get help swiftly, as Meg Trammell did.

At the hospital, Meg's mom recited her allergies as a parade of doctors, nurses, and interns drifted in and out of the room. "Everyone was interested in seeing how quickly it would inflame," said Scott-Trammell.

For her pain, Meg was given morphine, which made her throw up. And, after an hour and a half wait, Meg's doctor returned with antivenom, the usual treatment for venomous snakebites. Antivenom inspires your body to produce antibodies, warrior cells that will prevent venom from spreading through your body. "Apparently, they had to make it," said Scott-Trammell. "They had it under control."

"They put an IV in me," said Meg, describing how the drug for neutralizing poisonous venom was given to her. She stayed in the hospital overnight and and left before nightfall the following day.

"I couldn't wear shoes for two weeks," said Meg, who stuck to sandals. "I had to keep my leg elevated so that all the swelling would go down," she said. "There wasn't any venom left in it, but it was still swollen probably for a week."

She returned to school on crutches.

"The novelty of crutches wore off very quickly," recalls Scott-Trammell. Meg needed them for a week.

"It's gonna hurt but I mean as long as you get help fast then you're fine," said Meg. Calling 911 is the way to go, she said.